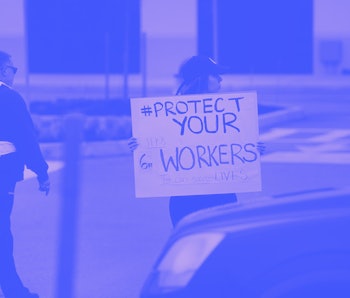 Warehouse and gig workers at a slew of major companies plan to walk off the job on May 1st to protest the lack of protections they've been granted for risking their lives during the current coronavirus pandemic. Dubbed the "May Day General Strike," the protest being organized through messaging apps and social media implores customers to boycott Walmart, Whole Foods, Amazon, Target, and Instacart, among others.

Workers at these companies have been protesting in recent weeks demanding benefits including access to free masks, an expansion of paid sick leave, and hazard pay. Many low-wage workers do not have the money to stay at home, even if they feel sick — putting themselves and others at risk of contracting COVID-19. At Whole Foods alone, there have been more than 253 cases of coronavirus and 2 deaths nationwide.

Some companies have ramped up protections in response, though workers say it's not always sufficient.

Case in point, Amazon's response — The company, on the one hand, says it's doing right by its workers, but then fires those who tweet criticism about its actions and makes it difficult for them to obtain promised sick leave. Amazon reportedly moved to lock down internal discussion boards as its corporate workforce has begun demanding improvements for warehouse and delivery workers. Now any email list with more than 500 participants becomes moderated, and managers have to approve every new posting.

What's new about the May 1st walk-out as opposed to prior protests is it's the first time workers across different companies are coming together as one.

Difficulties of organizing — Amazon and Instacart in particular have been able to keep costs down and avoid broad labor movements thanks in part to the distribution of their workforces. Many workers at both companies are independent drivers who receive their orders from a mobile app and never meet each other. Those in a warehouse or grocery store can be swiftly fired and replaced with someone else pretty quickly. That vulnerable nature makes it difficult to get together and demand better treatment.

Ironically it's some of the same technology that enabled these companies to succeed that workers are now using to organize this large protest.

“We’ve built this using free tools like Telegram, social media, and Google docs," said Tyler Robertson, a lead organizer of the walkout said in an interview. "We don’t have unions but one of the advantages for the new labor movement has been free tools. We haven’t spent any money organizing."

Making it hurt — Walmart holds more than 50 percent of grocery sales in the U.S., while Amazon represents nearly 50 percent of e-commerce sales. Disrupting those two companies alone could cause serious headaches for customers, and that's the point. These frontline workers have become essential in crisis times and they're rewarded not with better compensation but with millionaire CEOs calling them "heros" in TV commercials.

These companies arguably became the monopolistic behemoths they are today not just through innovative technology but also by exploiting the labor of low-wage workers. Their jobs aren't automated because it's cheaper to just work vulnerable people to the bone. Walmart, Amazon, and the like crushed small businesses to control the world on the backs of this labor force. This dominance may be the cinch in their metaphorical armor.