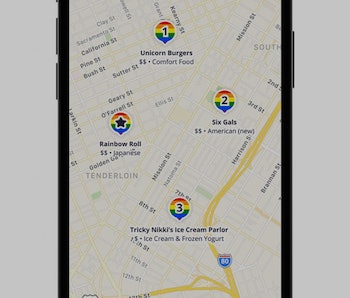 With Pride just around the corner, Yelp is adding a new feature for businesses to self-identify as LGBTQ-owned. Once a business has chosen to opt in, their Yelp page will display a small “LGBTQ-owned” sticker; that designation will show on Yelp’s search page as well.

“Though many strides have been made in the decades since the Stonewall riots in 1969, there are still urgent opportunities for change as we strive to create a world where laws and society treat all people equally,” the company writes in its announcement. Yelp adds that the rate of searches for LGBTQ-owned businesses in the U.S. increased by more than 150 percent in April 2021 over the year prior.

In addition to the LGBTQ-owned designation, Yelp is also highlighting businesses that identify as being “Open to All.” This category is part of the Open to All initiative, which Yelp first partnered with in 2018. Over 581,000 businesses have pledged their support for the project since.

Businesses with both labels will display a rainbow pin on the Yelp map. The new opt-in labels will make a business’s identity clear to consumers — but those rainbow pins could make it tricky to tell whether or not you’re actually supporting an LGBTQ-owned business.

Anyone can join — Yelp has made it very easy for businesses to designate themselves as LGBTQ-owned. All you have to do is log into your Yelp for business account and locate the Amenities section.

Then you just select “Yes” next to either “LGBTQ-owned” and/or “Open to All” and save your settings. There’s no review process; the labels will show up on your Yelp page right away. All businesses that designate themselves LGBTQ-owned will also receive a decal in the mail for their shop window.

Could this be used for harm? — Being open about your identity always comes with a risk; you’re opening yourself up to those who find fault in that identity. Not everyone is going to feel comfortable flying a bright rainbow flag in their window for fear of pushback — and that pushback is made easier by the relative anonymity of the internet.

In order to combat this fear, Yelp says it’s “proactively monitoring pages for hate speech against the LGBTQ+ community” and will remove any hateful content. That won’t stop any in-person hate, but the planned moderation is definitely a good call.

Mixed messages of support — This initiative’s goal is to make it easier to find LGBTQ-owned businesses across the United States. And it will bring those businesses more profits from those searching directly for that new “LGBTQ-owned” tag in the Yelp app.

If there’s any caveat in this mission it’s that the new rainbow map pins are for both LGBTQ-owned businesses and “Open for All” businesses — so it’s difficult, when looking at the map, to distinguish between these two categories. As Yelp mentions, there are hundreds of thousands of businesses that have taken the Open for All pledge; a cursory glance could mean someone looking to support an LGBTQ-owned business ends up supporting one of these instead. Every Ben & Jerry’s location will be marked with a rainbow pin, for example.

Yelp’s new Pride-themed designations are definitely a move in the right direction — the execution just could’ve been a little clearer.