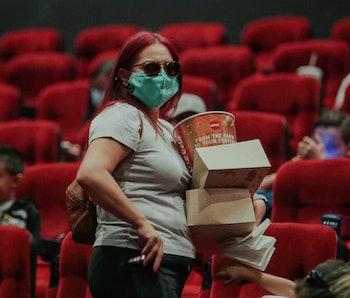 AMC says that moviegoers can now buy gift cards using Dogecoin, the digital currency that started as a mockery of cryptocurrency in general but which now has a marketcap of $31 billion.

The movie theater chain previously said it will soon allow guests to directly pay for tickets and concessions using cryptocurrency, and that’s expected to begin by the end of the year. What’s being announced today is simply the ability to buy gift cards online using a BitPay crypto wallet, and then pay at theaters using the gift cards. AMC’s CEO Adam Aron said in a tweet that customers buy up to $200 worth of gifts cards per day.

Reddit fever — AMC is capitalizing on the fervor that saw its valuation skyrocket this year as Reddit users banded together to stick it to Wall Street and move the markets themselves. The thinking is that sophisticated investors make money pushing stocks up or down based on their own analysis. Now the public, stuck at home during a pandemic, could pool cash together to do the same, although on dubious stocks. AMC, and another favorite, GameStop, are not exactly companies that have been doing well in recent years by any traditional metrics.

Ironically, both companies have been able to use the frenzy to sell stock, pay down debts, and try to reinvent themselves. Time will tell how that will pan out — theatrical release windows are getting shorter as studios emphasize streaming, and for GameStop, most people download their games nowadays rather than buying physical media.

Not practical — Cryptocurrencies have been another favorite of Reddit traders. It’s not clear how many people would actually pay for movie tickets with a currency like Bitcoin or Ethereum, however, since the value is so volatile and has a tendency to rise or fall significantly in short periods of time. The price of an Ethereum token was $351 a year ago — today it’s $3,612. Fees on transactions can also be fairly high.

Widespread acceptance of cryptocurrency may help stabilize its prices. Moves like this, while gimmicky at first glance, can only help with making it more mainstream, even if only by further driving awareness.

More like this
Will Gendron
5.12.2022 12:00 PM
Yikes
El Salvador's bet on bitcoin has been as volatile as expected
Andrew Paul
5.20.2022 6:15 PM
Opportunists
Conservative outlets are profiting from pro-Johnny Depp content
Andrew Paul
5.18.2022 2:20 PM
For Your Health
Cerebral realizes pushing benzos on TikTok is bad, actually