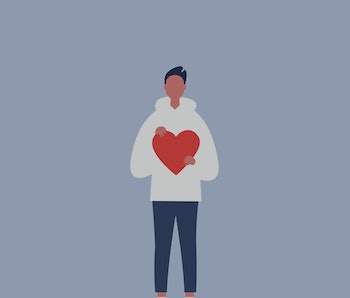 "Thumbs up," "love," "haha," "wow," "sad," and "angry." These are the six signature Facebook reactions with which we're expected to express the full spectrum of human emotion on the social network. But from now on, you can add "hug" or send a "beating heart" to your reaction repertoire.

With millions around the globe under stay-at-home orders, people are turning to social media to connect with their friends and family and navigate a new, and rather distressing, world. In all likelihood, a hug reaction won't restore stability to anyone's life right now, but it might help people express a fresh selection of emotions — longing, fear, concern, love, affection, respect, admiration, and more — in just one image. At least, that's what Facebook's hoping.

What Facebook says — Facebook's EMEA communications manager, Alexandru Voica, announced the new reactions on Twitter. "We're launching new Care reactions on @FacebookApp and @Messenger," he said, "as a way for people to share their support with one another during this unprecedented time."

"We hope these reactions give people additional ways to show their support during the COVID-19 crisis," Voica added. On the platform itself, the hug reaction will appear alongside the existing six reactions. The change will take effect next week around the world. Voica says that Facebook users can use it on photos, videos, posts, and more.

An updated and pulsating heart — Facebook's signature heart reaction is the regular red one, but now users can change this heart to the new pulsating version by pressing on the reaction and holding it. A prompt to select the updated version will then appear.

Sometimes simplicity does the trick — Facebook reactions won't alleviate the COVID-19 pandemic or do anything to stop its spread. But for some people a cute emoji or GIF might go some way to lifting their spirits. And that's what this addition aims to achieve, as Voica explains. "We know this is an uncertain time," he said, "and we wanted people to be able to show their support in ways that let their friends and family know they are thinking of them."