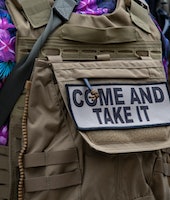 YouTube’s track record for consistently and appropriately enforcing its moderation policies is more than a bit uneven, but the company appears to have settled on a pretty clear line in the sand to ensure your channel gets permanently banned from the website: whipping your swarm of domestic terrorists and inciting a deadly insurrection attempt within the U.S. Capitol Building is Big No-No, alright?

The video streaming platform confirmed to Axios yesterday that it finally got around to removing two channels related to the Oath Keepers, the far-right militia organization whose major leaders were arrested last week over seditious conspiracy charges. The “Oath Keepers” YouTube channel only counted less than 45,000 subscribers, while the channel belonging to the group’s founder, Stewart Rhodes, garnered less than 20 followers. So, not exactly a huge win in the war against violent chauvinistic extremism, but...

Well, actually, there’s not really any “but” about it. As long as companies like YouTube operate reactively rather than proactively, these sorts of gestures ring pretty hollow long after the damage has been done.

Still plenty of other platforms — Any news that inconveniences groups like the Oath Keepers is good news, but alas, there are still a bunch of other venues allowing extremists to congregate online. Places like Parler, Gab, and Telegram all are breeding grounds for the proliferation and organization of rightwing sentiments, while the alt-YouTube platform, Rumble, has also gained a certain amount of “credibility” recently by attracting the likes of Glenn Greenwald and Tulsi Gabbard. Although none of these have the reach of a platform like YouTube, they still are troubling loopholes to ensure reactionaries’ dangerous ideologies continue to spread online.