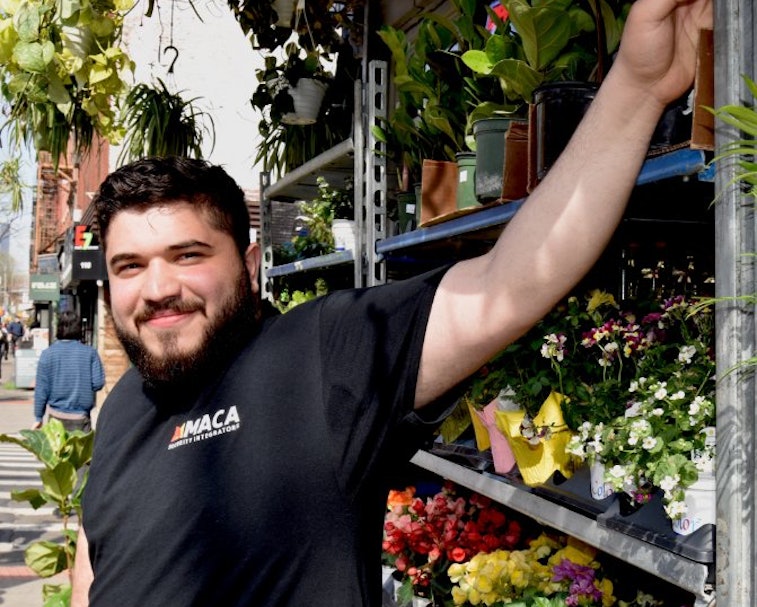 A 21-year-old security technician from New Jersey was installing cameras near St. Marks Place and First Avenue in Manhattan when he saw a person that matched the description of the Brooklyn subway shooter, who injured more than 20 people with a smoke bomb and later by gun on Tuesday.

“I was working inside the store and I was doing security cameras inside and I see the guy, he was walking from the street, and I see him [on] the cameras,” Zack Tahhan told reporters at the scene.

He sprung to action and warned people to steer clear, worried that something bad might happen. In an animated retelling of the moment, the Syrian immigrant said “people think I’m crazy, like maybe people think I’m on drugs but I am not! I am fasting,” referencing his observance of Ramadan. As he talked to onlookers, he darted back and forth, dramatically reenacting his bad-guy takedown with lively charisma. At one point, when a crowd had gathered, he took a reporter’s microphone and started interviewing other witnesses. He’s a natural!

According to the New York Times, the police have not yet confirmed whether Zack Tahhan’s action actually led to Mr. James’s arrest, and Zack’s not the only one claiming a role in leading the police to the shooter — which carries a $50,000 reward.

“He’s all over social media. But I’m the one who took action,” said an East Village hardware store manager named Francisco Puebla in reference to Zack Tahhan, according to The New York Times. Artist Lee Vasu claims to have alerted the police, too.

The hometown hero treatment — But Zack Tahhan is the instant internet sensation. People proclaimed “Zack for mayor!” on social media after seeing videos of his peppy narration of the incident. On Wednesday night, he got a shoutout on The Daily Show. He’s gotten personal thanks from New York’s Attorney General Letitia James, a NYC council member, and the founder of the Arab American Institute. His Twitter following has climbed to over 18,000 and his morning selfie today (which is, I tell you, a very nice picture) is approaching an astonishing 100,000 likes in just a few hours. He tweeted that he hadn’t gotten a monetary reward but that “The Big Reward is the people who supporting me I love you all [sic],” he was flooded with supportive replies and over a thousand dollars in donations.

He’s an immigrant hero, one of the fabled Good Guys, and he’s given us a feel-good story that evokes Mr. Roger’s motto to “look for the helpers.” People love him so much they’re asking for Zack Tahhan merch line.

But overnight heroes don’t always fare well — Let’s just hope Zack doesn’t get milkshake ducked. Or Jewelled! In 1996, Richard Jewell enjoyed three days of heroic glory after he discovered a backpack containing three pipe bombs and alerted police before the 1996 Olympics in Atlanta. But Jewell’s media coverage took a 180 when The Atlanta Journal-Constitution described him as the focus of the investigation three days after the event, leading to months of media scrutiny and undeserved public shame before he was eventually cleared of all charges.