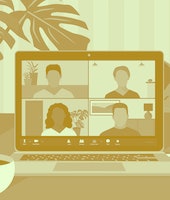 Zoom Video Communications, the company behind the popular video-conferencing software, increased its profits by more than 4,000 percent during the first year of the pandemic. It paid exactly zero dollars in federal taxes on those profits. Yes: zero, zilch, nada, nothing at all.

All told, Zoom reported profits of more than $660 million for the 2020 fiscal year — where the previous year it had raked in just about $16 million. There’s no doubt in anyone’s mind that the company owes its success to the COVID-19 pandemic, which forced office life and plenty of other activities to go virtual last year. Even the word “Zoom” has become shorthand for video-calling in certain crowds.

And yet the company behind the year’s most popular software solution gave none of its profits back to the U.S. government. It achieved that zero balance through a series of creative loopholes.

All about those stock options — Zoom’s trick here is an old one: use stock options to cook your books and minimize fees owed to the government. The Institute on Taxation and Economic Policy (ITEP) explains that companies often compensate their high-ranking employees with stock options rather than cash. This allows the company to write off large expenses that far exceed their actual cost.

Zoom is also using something called “accelerated depreciation” to its advantage. The gist of this break is that a corporation can receive a tax break for investing in equipment and resources to extend its services in the future. The company also receives tax breaks for investing in research and development.

The system serves the richest — It comes as no surprise that Zoom paid zero dollars in taxes last year. These are the same loopholes corporations have been using for years. Tech companies are some of the top offenders here, with the likes of Amazon, Microsoft, and Google taking most advantage of tax breaks. These breaks total more than a trillion dollars per year for some companies.

The tax workaround hits especially hard this year. Millions of Americans lost their jobs because of the pandemic, while companies like Zoom and Amazon made ludicrous amounts of money off the switch to stay-at-home living. All while paying none of those profits back in taxes.

Zoom ended 2020 with $4.2 billion in cash and equivalents. The company said on a recent investor call that it doesn’t even know how it’ll use that money yet. So yes, you could say we’re just a tad bitter.