“[With a pandemic] it’s easier to set policies that are a little more black and white and take a much harder line.”

Mark Zuckerberg in an interview with the New York Times 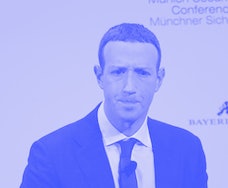 Social media giants have responded to the misinformation surrounding the coronavirus with a zeal they lacked following the Cambridge Analytica scandal and the 2016 presidential election. Facebook responded weakly to calls for consequences for political misinformation, but has prominently squashed content from bad actors in the wake of the ongoing pandemic.

In an interview with The New York Times, Mark Zuckerberg said he thinks the current medical emergency is more clearly a dangerous magnet for false narratives than politics. Yes, that includes the rise of neo-Nazis and a right-wing government that actually dismantled what infrastructure there was in place to deal with crises like pandemics.

More reliable sources are online — Joanna Geary, the senior director of curation at Twitter, told the NYT, “The people who are part of professional communities across epidemiology and other kinds of public health — normally they’re talking to each other, but right now they’re talking to us all.” More medical professionals are taking to Facebook and Twitter posts as well as videos on platforms like YouTube and Instagram to disseminate legitimate information. Luckily, Big Social Media has figured out how to amplify those messages while quashing the opposite.

"It’s perhaps a positive sign that, despite how polarized people are worried that society is, people can pull together and try to get things done and support each other and recognize people who are heroes on the front lines fighting this stuff," Zuckerberg said. Adding that, "It’s hard to predict exactly how it plays out beyond that. And that’s not really my job, anyway."

Oh, now you know how to do it — Social media companies have announced new misinformation policies over the past year with varying degrees of efficacy. Facebook and Twitter receive much of the criticism and frequently announce account takedowns to deflect it. It's a “see, we’re totally working on it” ploy. While Twitter still isn’t doing anything about the Nazis, it at least banned political ads.

Zuckerberg just doesn’t think the modern political landscape is "black and white." With COVID-19, Facebook is working against “misinformation that has imminent risk of danger, telling people if they have certain symptoms, don’t bother going getting treated … things like ‘you can cure this by drinking bleach.’ I mean, that’s just in a different class.”

Because people will drink bleach because they read a post about it, but they definitely won't vote against their interests, like healthcare, based on false claims in fear-mongering ads. Right.