“My guess is that all these advertisers will be back on the platform soon enough.” 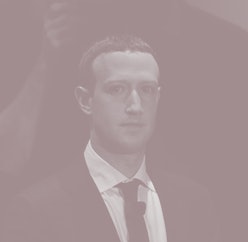 During a video town hall meeting last Friday, Facebook CEO Mark Zuckerberg told employees that the company will not change any policies in response to the still-growing Stop Hate For Profit ad boycott that's cost the company billions of dollars, and immeasurable reputational damage. Based on transcripts of the meeting obtained by The Information, Zuckerberg doesn't seem too concerned at all about the boycott's long-term effect on Facebook.

In the private meeting, Zuckerberg said he was reluctant to “capitulate” in response to the boycott, which he called more of a “reputational and a partner issue” than a financial one. He noted that the advertisers participating in the boycott — which now number more than 500 total — comprise only a small part of Facebook’s revenue.

Facebook’s public-facing response to the ongoing ad boycott has, for the most part, centered on a complete denial of the social network’s propensity for enabling hate speech and misinformation to proliferate on its platform. Zuckerberg’s refusal to confront his company’s mounting issues head-on — even when confronted with them directly — is only further proof that Facebook’s problems are deep-seated and, perhaps, entirely inseparable from what the platform has become.

Zuck doesn’t want to look weak — In speaking to his employees, Mark Zuckerberg did not speak to the underlying issues — namely Facebook profiting off ads containing hate speech and misinformation — but instead focused on how bad it would look if Facebook gave in right now.

“We don’t technically set our policies because of any pressure that people apply to us,” Zuckerberg said in Friday’s meeting. “And, in fact, usually I tend to think if someone goes out there and threatens you to do something, that actually kind of puts you in a box where in some ways it’s even harder to do what they want because now it looks like you’re capitulating, and that sets up bad long-term incentives for others to do that [to you] as well.”

This isn’t an issue of right and wrong or of harm reduction for Zuckerberg; it’s about his reputation and that of his company. Rather than actually examine the issues brought up by the ad boycott, Zuckerberg only seems capable of focusing on how going back on his adamant stance — no matter how ill-conceived it is —would look bad for him.

Missing the point — What Zuckerberg misunderstands about the function of the boycott is that it was never set up to send Facebook into financial ruin. Stop Hate For Profit aims to raise awareness of Facebook’s increasingly problematic moderation policies. In that it’s already succeeded. It's trying to get it to be better, rather than trying to shut it down.

Facebook is in panic mode. The company is frantically pushing PR statements to calm investors. Even if Zuckerberg doesn’t want to admit it, Facebook’s glaring problems are receiving more media attention than ever before.

The Stop Hate For Profit campaign is doing exactly what it set out to do. Hundreds of huge companies are joining the boycott because the truth here is self-evident: Facebook is profiting off hate speech and misinformation. Zuckerberg doesn’t have to fess up to that for it to be true.

Zuckerberg left his employees with an important task: remind the public that Facebook is doing everything it can to fight hate speech. It's the same message the company has been pushing for a few weeks now, and one that fundamentally misses the point.

The Facebook CEO is right on one count — this looks really, really bad for Facebook's reputation. Perhaps the boycott needs to be extended to have a meaningful financial impact. Because it seems like that's the only thing that'll get Zuckerberg to actually do anything useful in response to it.