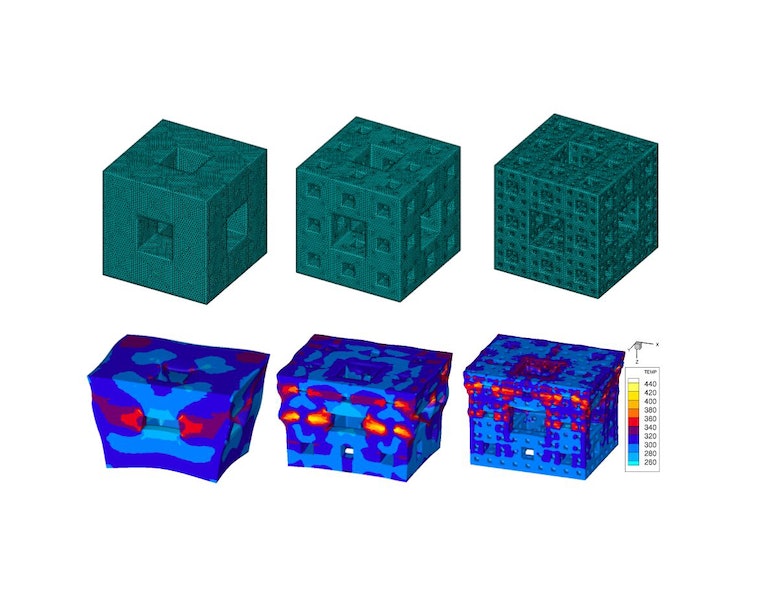 A set of tiny 3D printed plastic cubes with intricate fractal voids inside them could make huge advances in protective tech that can withstand powerful, sudden impacts, like bullets, debris from explosions, or the extreme and sudden forces that come from a high-speed automotive accident. The cubes are being developed by researchers at Los Alamos National Laboratory in New Mexico. Researchers tested the cubes by "firing an impactor into them at approximately 670 miles per hour." They dissipated the resultant shocks five times more effectively than solid versions made from the same material.

“The goal of the work is to manipulate the wave interactions resulting from a shockwave,” said Dana Dattelbaum, a scientist at the lab and lead author on a forthcoming paper about the tech that will appear in the physics-focused journal, AIP Advances. The material could be perfect for protecting from all kinds of impact — everything from explosives, blows from blunt objects, or car accidents, to earthquakes. They could also prove useful in another area of research: protective headgear, of the sort the NHL is funding.

Dispersing shock effectively — Scientists already have a pretty good understanding of how shockwaves behave. But they know far less about how to effectively disperse them, especially when they're very rapid or powerful.

Shockwave-dispersing materials that utilize voids — similar to those in the new cubes — have been developed in the past, but they usually involve random distributions that can only be discovered through trial and error. Or they include standardized hollows that only account for select sorts of impacts.

In this case, the voids are placed in precisely controlled locations throughout the cubes, thanks to dedicated research at the Los Alamos National Laboratory. This allows the cubes to be reproduced at a large scale, which could increase their possible use cases.

More improvements to come — Though these weird little cubes are much more effective than similar models that have been developed in the past, they're nowhere near the peak of this tech’s development.

Researchers say it’s not clear yet whether or not this particular fractal structure is the best shock-dissipating design. They’re still investigating other, similar patterns to discover the most effective means of dissipating shock, using optimization algorithms to guide their work. The shapes they settle on may also depend on what sort of shocks the gear they're designing for is intended to disperse.

The applications for the new fractal cubes are practically endless — they’ll come in handy in any circumstance in which you might need protection from sudden blows. The researchers speak specifically to helmets and other wearable protection like armor, but the cubes could also be used in building structural supports or even protective layers for cars to make them safer, or armored vehicles that need to endure bomb blasts.