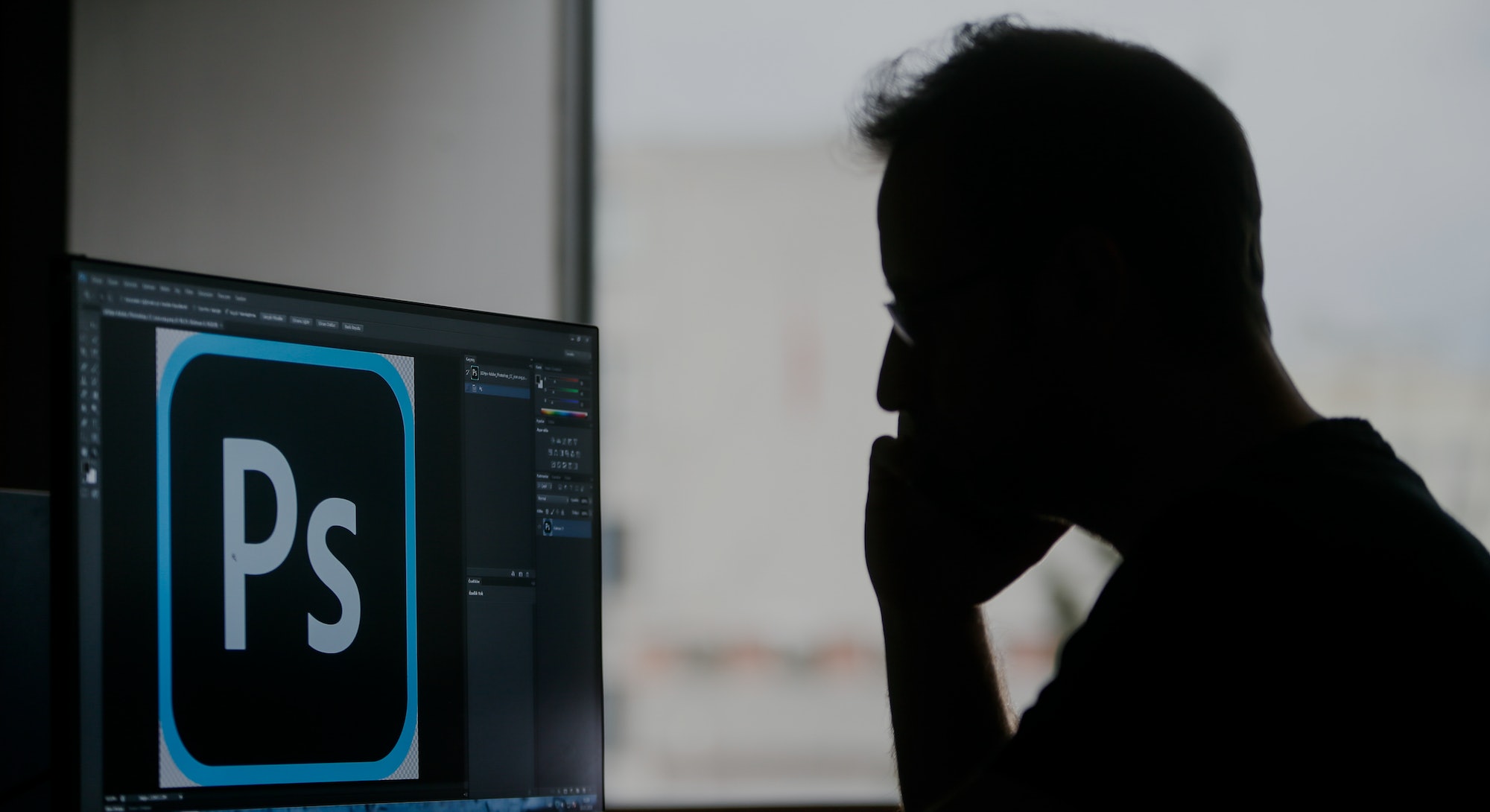 Lately, I’ve been getting a lot of advertisements from the software giant Adobe while browsing the web or streaming music. Maybe some of them are targeted to me as a former customer, or maybe it’s just happenstance.

One ad in particular sticks out in my mind: the musician Lil Nas X holding a microphone, cartoon-y asteroids and abstract blobs behind him, next to the tagline “Own your creativity with Adobe Creative Cloud.”

Like millions of other people, I have owned my creativity through Adobe — or, at least, rented it for a monthly fee. I’m a professional designer, and, yes, graphic design is my passion. It sounds silly, but at some point in my late teens, I became obsessed with the visual complexity of the thousands of images we encounter every day, enthralled by the mystery of how they’d been assembled. My college didn’t offer any design classes, so I embarked on a feverish course of self-study built on YouTube tutorials and books from the library.

Central to becoming an employable graphic designer, I learned, was mastering the use of Photoshop, InDesign, and Illustrator, three of Adobe’s many proprietary applications. In 2017, the $19.99-per-month first-year student rate seemed like a small price to pay in service of my career aspirations.

Since then, I’ve watched a cycle involving Adobe repeatedly play out on social media: Every few months or so, someone posts on Twitter, Tumblr, or Reddit about being ripped off by the company to the tune of hundreds of dollars via a deceptive contract with steep cancelation fees, and for a day or two, the internet is ablaze with outrage. In April, a now-deleted tweet from an Australian user about a fee equivalent to US$217 inspired ire, discourse, and the deployment of this meme:

And it is, in my opinion, “always morally correct” to pirate Adobe products. Adobe is a seemingly intractable cancer on creative fields, its scamminess extending far beyond exorbitant cancelation fees. I wouldn’t go so far as to say the company is the reason I’m a socialist, but the day I signed up for that student membership in college, I unknowingly stumbled into a lesson about how capitalism cannibalizes the things we love, then sells the exploitation back to us dressed as innovation and personal freedom.

Adobe began in Los Altos, California, as an archetypal garage startup in the early 1980s. Its first major product was PostScript, a computer language that allowed computers to print images at a higher level of detail than they could display them. As PostScript became commercially successful, the company branched out into fonts, and then released Illustrator, software that allows users to draw scalable shapes by using vectors instead of pixels. Photoshop, its most famous product, came out in 1989.

In the late 1990s and early 2000s, with several more successful in-house products under its belt, Adobe went on an acquisition spree, purchasing its main competitor, Macromedia, for $3.4 billion. Macromedia then owned FreeHand, a drawing program Adobe had bought previously in 1994. (The Federal Trade Commission had forced Adobe to sell that software back due to anti-competitive-practice concerns.)

For most of Adobe’s history, its software could be purchased in a boxed set that came with a perpetuity license — that is, one that never expires. A single program typically cost a few hundred dollars, while different sets ranged from $1,299 to $2,599 (the full Creative Suite, minus Photoshop Standard). In 2011, Adobe created a cloud-based version of its product bundle, advertising it as a convenient way for users to install the programs and receive software updates. Less than two years later, the company announced its discontinuation of boxed products, meaning that from that point on, Adobe software could no longer be owned with a perpetuity license — only rented month-to-month or year-to-year.

Adobe marketed this as a way of passing savings along to the consumer, as all updates are included in the monthly or yearly fee. But most people don’t need every single update — depending on their work setup, some could happily go years without one. Adobe Creative Cloud’s all-product bundle currently costs $74.49 a month. If Creative Suite were still around, you could purchase the $2,599 package and seven $899 updates over the course of 10 years and still pay slightly less than a customer on a decade-long Cloud plan — assuming the monthly price doesn’t go up over time. (Asked for comment, a representative from Adobe said that the subscription plans “benefit customers by offering lower price points to entry for new users.”)

The shift caused a fair amount of fuss. As then Scientific American columnist David Pogue put it in 2013: “We’re happy to pay monthly when we can see what we're getting for it: TV shows or movies or heating or cooling or articles. But paying a monthly fee for software doesn't feel the same. We download a program, and there it sits. Month after month we pay to use it, but we get nothing additional in return.”

Erik Carter, a professional designer and former New York Times art director who’s been using Adobe products since he discovered graphic design forums on the internet in middle school, says the transition wasn’t something the company had to do. “They already had a lot of money,” he says. “It was pretty obvious that they just wanted more money, and it totally worked for them.”

Adobe also offers two annual plans: a $599.88 one-payment option and a $52.99 monthly installment option. These are, on their face, much better deals, though still not as cost-effective as buying a box set and forgoing updates for a few years would be. But the monthly-installment plan is the one that most often triggers the social media memes-and-outrage cycle. That’s because it’s the one offered by default in the payment plan menu when you go to purchase an Adobe subscription, meaning that unwitting customers often select it accidentally, believing it to be the monthly plan.

This mistake carries a hefty price tag — the contract’s fine print stipulates that Adobe can charge a fee equal to 50 percent of the remaining contract upon cancelation, which, given the products’ cost, can easily come out to more than $200.

Carter is right about the cash grab working in Adobe’s favor — since the beginning of 2013, Adobe’s annual revenue has more than tripled to $12.9 billion, and its stock price has increased from just under $40 to more than $600 today. But it’s unclear that the product prices, which have remained nearly twice as high as that of anyone else in the market, translate to ongoing exceptional quality.

Adobe may not technically be a monopoly, but it effectively operates like one.

While Carter believes that Adobe’s programs are generally very good, he notes their bloated size has made them increasingly slow, and that the company seems to lack interest in community feedback with regard to development, prioritizing features like AI-guided neural filters over improving more basic functions. “They’re really good at adding flashy features,” he says, “but not the ones designers are asking for, so I was always kind of frustrated with them.”

So why do people keep paying hundreds of dollars a year for these products? Depending on their occupation, they may not have much of a choice. Adobe is the industry standard software across fields like graphic design, publishing, marketing, and web development, meaning that most jobs in these fields will require proficiency in relevant Adobe products as a base-level qualification. It may not technically be a monopoly, but given its throttling grasp on the industries in which it is a standard bearer, it effectively operates like one.

There are alternatives to Adobe products that the company hasn’t bought up yet. Free and open-source products such as GIMP and Inkscape have long been popular, but for professional designers, they may be lacking some necessary features. Corel, one of the next-largest companies in the market, offers a suite with its equivalent of Photoshop, InDesign, and Illustrator, plus a few other products, for $20.75 a month, or outright purchase with perpetuity license for $499. A European-based company called Serif began rolling out its suite of Photoshop, InDesign, and Illustrator analogues in 2014, and offers each for a one-time purchase of $49.99.

Ashley Hewson, Affinity’s managing director, says that development on the products began several years in advance of Adobe’s shift toward the subscription model, but adds that the coinciding release helped fuel enthusiasm for the small company’s products. “It was very clear to us as soon as they’d done that, that they caused a lot of bad feeling in the creative community,” says Hewson. “So when we launched there was this desire, or this relief, perhaps. People were desperate for some sort of alternative.”

But Corel, Affinity, and other competitors can so far only nibble away from Adobe’s massive user base. As comparatively small companies — Corel has an estimated annual revenue of around $110 million, while Serif’s is around $25 million — they simply don’t have the resources to compete with Adobe’s multibillion dollar, 21,000-employee enterprise. According to Hewson, that’s why Affinity hasn’t yet stepped into other parts of Adobe’s market, such as video-editing and animation software. “They do as much development in a day as we do in two years,” he says, “so you do kind of have to pick your battles.”

Adobe bleeds its users dry for the pleasure of depending on them.

The problem of Adobe’s dominance can’t be solved by simply coordinating a mass switch to a competitor’s software — even if this were possible, any company that came within spitting distance of Adobe’s massive usership would likely enact a profit-sucking subscription model as well. In the ideal creative software ecosystem, there would be multiple affordable, single-purchase products for every need, each created by a different company or cooperative. I personally have forgone my Adobe subscription for the past several months in favor of the Affinity suite, but as a person whose livelihood depends in part on the design industry, I know sooner or later I will be pulled back into Adobe’s orbit.

Ultimately, this isn’t just about Adobe: It’s about every corporation that becomes indispensable, through initial success and subsequent stymieing of competition, and then bleeds its users dry for the pleasure of depending on them. Perhaps the most frustrating thing about proprietary software-as-service is the way the proprietors have reframed the issue to characterize themselves as noble, even heroic. Like a boss becomes a “jobs creator” and a landlord becomes a “housing provider” within the twisted branding of capitalist logic, these companies pat themselves on the back for raking in our money. It’s bullshit — housing can exist without landlords, labor without bosses, and certainly, photo-editing software without Adobe.

I believe that the design, publishing, animation, and web development industries can and someday will be able to wriggle free of the grip Adobe has had on them for decades, if for no other reason than because my love of graphic design compels me to. Until then, I’ll be trying my best to stick to smaller companies’ software. Or I’ll take the advice of that meme, doing the morally correct thing and pirating Adobe products.