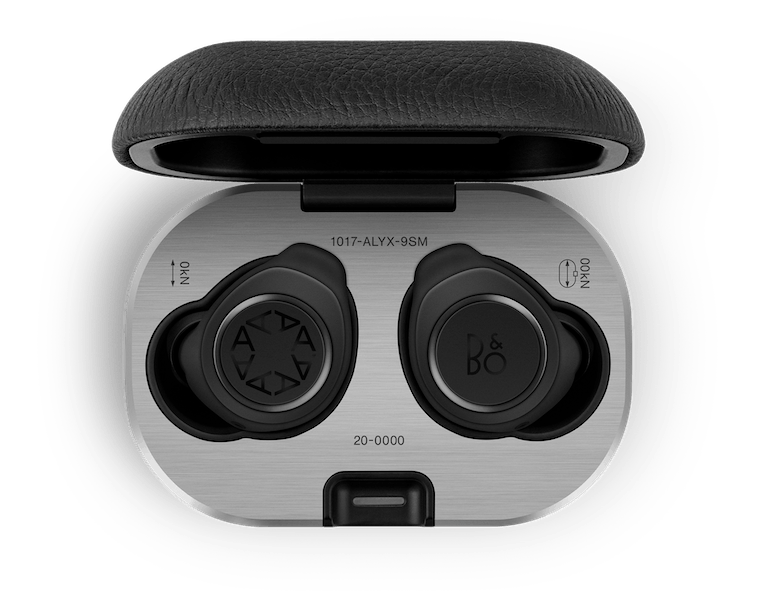 Alyx has teamed up with Bang & Olufsen for a fashionable take on the Beoplay E8 Motion 2.0 wireless earphones. Alyx designer Matthew Williams lends his industrial sensibilities to the esteemed audio company while applying his branding to the brushed aluminum and black leather charging case.

The materials are essentially the same as B&O’s baseline model, but the graphic treatment puts it in an entirely different context. The earphones themselves also feature dual branding, with one of the buds sporting a repeating “A” pattern that also looks like a compass rose.

Give me some specs — The case is enabled for Qi wireless charging and packs three full charges for a total of 16 hours of playtime. Soundwise, we’re talking a range of 20 to 20,000 Hz, with noise isolation that can be toggled on and off.

While the Beoplay E8 Motion 2.0 normally retails for $350, the Alyx version takes the price tag up to $400. That’s essentially a $50 upcharge for Williams’ signature design, which is… not bad. Unlike, say, an Alyx buckle necklace that my style confidants had to talk me out of buying, this isn’t a trendy piece that you’ll come to regret purchasing in as little as a year.

Ready to drop the dough? — The collaboration will hit the Highsnobiety store exclusively from January 13 to 15, before becoming available through Bang & Olufsen on the 16th. End Clothing is also raffling off a chance to purchase, which should indicate the sense of urgency you should have if you’re so inclined to cop. If you hesitate too long, the decision may have already been made for you.