Apple is designing with logic again

“The company is planning to bring back an SD card slot for the next MacBook Pros so users can insert memory cards from digital cameras.” 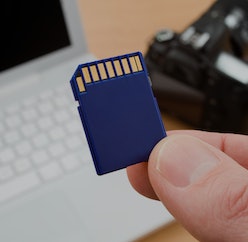 Buried in Mark Gurman's report on Bloomberg this morning about Apple working on a thinner and lighter 13-inch MacBook Air is confirmation that the SD card slot is returning to new MacBook Pros planned for later this year.

"The company is planning to bring back an SD card slot for the next MacBook Pros so users can insert memory cards from digital cameras."

Be still my heart. Someone hold me. Last week, when Gurman dropped news on upcoming Apple Silicon-powered MacBook Pros coming including additional ports, I — along with many creatives and professionals — posited that the only logical port other than the return of MagSafe would have to be the SD card slot that Apple had excised in 2016.

It only makes sense that professionals would need the SD card slot back. I wish for it every day. Every time I have to dig around for my SD card dongle to dump photos from my Sony mirrorless camera. I'm sure every YouTuber — aspiring or veteran — feels the same. And it's coming back. I am so amped right now I can't even sit still while typing this because I might burst into flames from giddiness.

Makes total sense — Picture this: MagSafe for fast charging; USB-C ports for data, video output and charging; and an SD card slot. That's all the ports a new MacBook Pro needs. Some folks are hoping for the return of an HDMI port. I'd love it too, but video output can still be handled via USB-C. Besides, I think we can all agree that video output is less important than an SD card slot.

No Face ID for iMac redesign — Gurman also says that Apple was planning to include Face ID on its redesigned iMacs, but that plan has now been put on ice. "Face ID had originally been planned to arrive in this year’s iMac redesign, but it’s now unlikely to be included in the first iteration of the new design."

Ditto for built-in cellular connectivity according to Gurman. Along with Face ID, he says "neither feature is coming soon." That's okay, because SD CARD SLOT on MacBook Pros.

Why believe Gurman? — To be clear, Gurman's report should be taken with a grain of salt. But considering his reliable track record with Apple leaks over the last decade, we're going to trust him because HOLY SHIT, SD CARD SLOT.