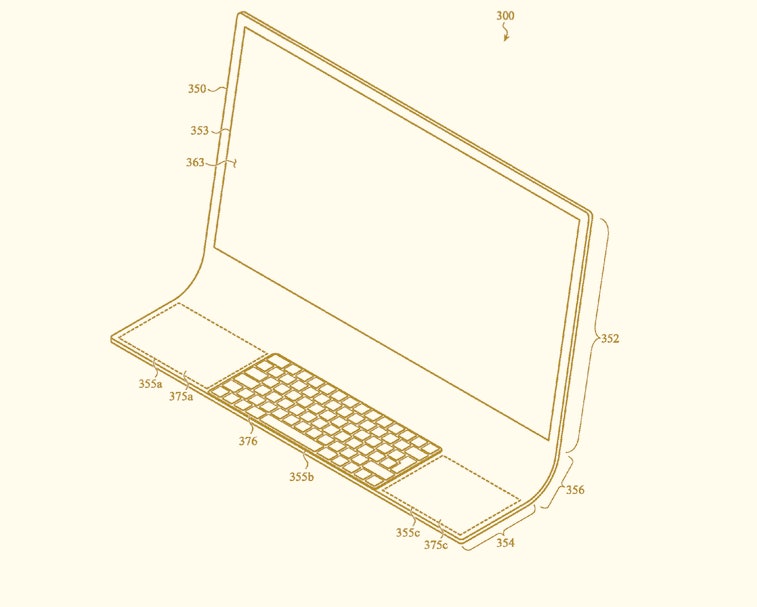 Apple is always on the hunt for the next best tech innovations, but its core offerings are pretty consistent from year to year, with small changes along the way. A newly discovered Apple patent dreams bigger than usual: an all-in-one, curved desktop computer with built-in dual trackpads.

Of course, a patent filing doesn’t mean this device will ever see the light of day. But it’s nice to dream.

Foldable, changeable, powerful — The device pictured in the patent, called "Electronic Device with Glass Housing Member," is sleek and ultra-modern. It’s even more “all-in-one” than the iMac has ever been, with a keyboard and two (two!) trackpads — one on either side. One of the patent drawings depicts the bottom of the display folding up for storage.

As if this weren’t enough, the patent also describes a way in which a MacBook could be docked in the rear of the device, too. This would allow the screen to be used without owning its processing components. It appears that the keyboard could actually detach from the device, allowing a MacBook to slide in its place.

This probably won’t be released — At least not in its current form. For starters, an enormous curved glass device like this would be very fragile and likely difficult to repair. It would be massively expensive, too, even by the standards of the Mac Pro.

It’s been way too long since the last iMac redesign — It’s much more likely that the design seen in this patent is used as a jumping-off point for an iMac successor of some sort. It’s been almost two decades since we saw a major iMac redesign, so a true evolution of the Apple computer would be more than welcome.