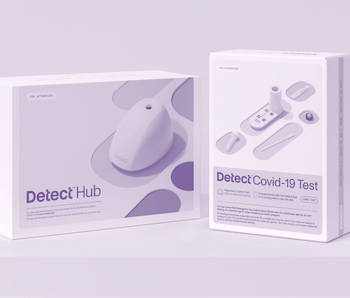 Detect, the latest medical startup to tackle the COVID-19 sold out of its new at-home testing device in a matter of days. The supply was no match for the crazy demand for COVID-19 testing that we’re seeing due to the Omicron variant and its higher transmissibility and ability to infect vaccinated people.

Detect first made its at-home testing device available on December 15 and later had to limit customers to one test per household, a company spokesperson told The Verge. With the first drop depleted, the startup is planning to have more tests available at noon on December 26.

Detect isn’t the first to put out at-home COVID-19 testing devices. It follows Lucira’s Check It single-use test kit and Cue’s device. But what Detect does have going for it is its streamlined and discreet design that doesn’t look out of place in your apartment. Besides, these at-home testing device companies may be pioneers for a virus-laden future where we all have these in our bathrooms.

How it works — Like its competitors, Detect’s device can be used at home and offers PCR testing results within an hour. The device offers step-by-step instructions with its complementary app and looks like pretty much the same process as the traditional COVID-19 tests that you’re probably tired of. The innovation combines the accuracy of the PCR testing, which can take several days through traditional lab results, and the speed of rapid COVID testing, which can sometimes be less accurate.

While out of stock, Detect’s starter kit that comes with its reusable testing hub and a rapid molecular COVID-19 test is priced at $75. Detect also sells additional at-home tests for $49. Unfortunately, if you don’t have access to these, one of the alternatives is waiting in the hours-long lines throughout the country.

Detect’s new device hasn’t been cleared or approved by the U.S. Food and Drug Administration, but it received its FDA authorization under an emergency use authorization in October. Detect also offers free standard shipping on its device, but isn’t currently doing international shipments.

Tech meets medical — Detect was co-founded by Jonathan Rothberg, a doctor who invented the original DNA sequencing platform that identified the Omicron variant. His efforts against COVID-19 continued with Detect, where he wanted to bring the accuracy of a PCR testing lab to the home.

The Detect team also brought on Hugo Barra, the former tech executive who was recently announced as CEO of the startup. Barra’s influence may come through Detect’s designs considering his many years of experience working on Google’s Android devices, Xiaomi’s smartphones and tablets, and with Facebook’s virtual reality division, now known as Meta.

If you’re sold on Detect, you’ll get another chance to buy its device just after Christmas. Otherwise, you might have to wait for more startups to jump on the trend.

More like this
Maya Ernest
6.22.2022 5:00 PM
Design
The ‘Monster Hunter’ Kongari Meat pillow will be the prime cut of your home
Jackson Chen
6.18.2022 6:00 PM
Design
Lego's three-foot tall roller coaster set is for real thrill-seekers only
Maya Ernest
6.16.2022 9:30 PM
Design
A24 turns the ‘Everything Everywhere All at Once’ butt plug trophy into a candle