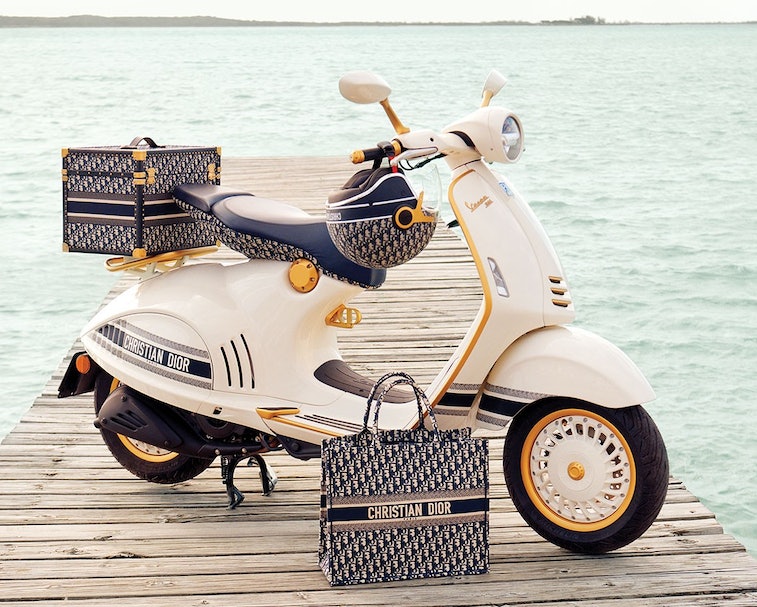 Dior has unveiled a Vespa 946 scooter as envisioned by womenswear director Maria Grazia Chiuri. The limited-edition scooter is expected to hit stores in 2021 and is fully decked out in the French house's signature Oblique print. As if that weren't enough, "Christian Dior" is slapped onto the fender to make the brand's tote bags seem modest.

Vespa's flagship scooter — Named for Vespa's first scooter in 1946, the 946 debuted in 2011 as the manufacturer's most ambitious model. Each run comes in a limited edition color, the most current of which is all red and helps raise money to fight AIDS through the (Red) program. Its near $10,000 price tag doubles that of a typical Vespa, making it the ideal model for a luxury house like Dior to collaborate on.

Under Dior's direction, the monohull body is done up in cream with gold trimming and Oblique striping. The brand's signature motif also appears on the underside of its famed blue seat, as well as an accompanying helmet and hard case. The latter accessory has been designed to fasten atop the luggage rack, adding a degree of practicality to what is ultimately a wonderfully needless collaboration. And if you're looking for more reason for this scooter to exist, Vespa and Dior happen to be founded in the same year.

Do you care about the specs? — While the Dior branding is clearly the appeal here, we'd be remiss not to talk about the specifications on a site as tech-oriented as this. The 946 features a 125cc engine in most of the world but is boosted to 150cc in North America to meet U.S. highway requirements. Consisting of 3-valve 4-stroke construction, it utilizes air cooling and fuel injection on its way to 12.7 horsepower in North America and 11.6 horsepower elsewhere.

Available next year — Vespa announced this collaborative 946 will hit Dior boutiques worldwide in Spring 2021, as well a selection of Motoplex store. If you want the accessories, though, you'll only be able to get those directly through Dior. And if you're gonna splurge like this, how could you not add the accessories?