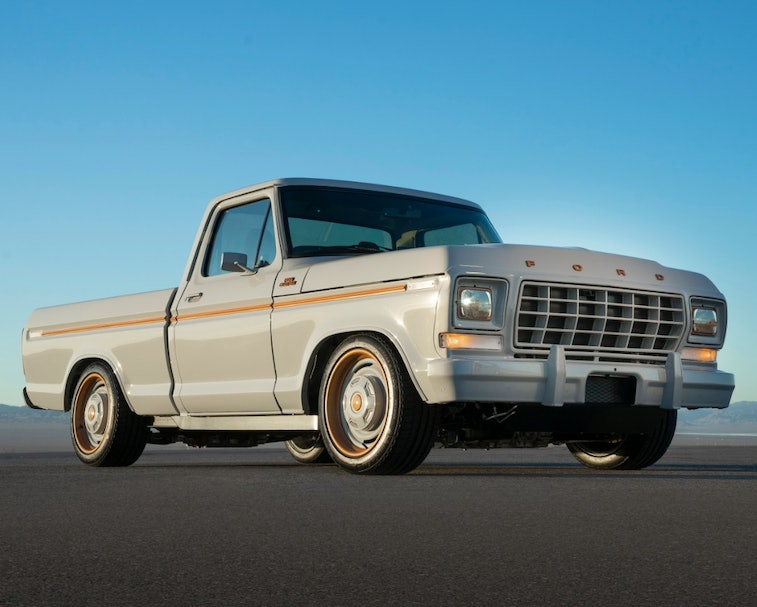 It is absolutely imperative that world transitions to electric and hybrid engine vehicles as soon as possible. The future of our environment, and even our species, depends on it. Thankfully, carmakers are finally (finally) beginning to step up to the challenge with a whole range of extremely sleek, futuristic offerings for consumers... so much so that it’s become a bit of a hindrance.

There’s something about the designs of classic cars and trucks that just isn’t present in a lot of modern offerings. We imagine companies could court an entirely new demographic of drivers if they simply gave us those same frames with an electric motor underneath the hoo—HOLY CRAP LOOK AT THIS “F-100 ELUMINATOR” FROM FORD:

Showing off its ‘e-crate motor’ — Unveiled earlier this week at the SEMA Auto Show in Las Vegas, Ford’s F-100 Eluminator showcases the company’s new electric crate motor that is now available to order online for a genuinely not-bad $3,900. With 281 horsepower and 317 lb.-ft. of torque, the new e-crate motor is designed so that custom builders and repairers can repair, or even create, badass electric vehicles on their own. Case in point: The Eluminator, whose frame is based upon a Ford 1978 F-100 pickup truck.

"Our F-100 Eluminator concept is a preview of how we're supporting customers as they go all-electric and embrace zero-tailpipe emissions performance, even for our heritage vehicles," said Eric Cin, Ford global director of accessories and licensing, in an official press release yesterday. Check out some more images below of our newest dream ride.

We’ll settle for the F-150 Lightning — As much as it pains us to say, it seems as though the F-100 Eluminator is unlikely to hit car lots anytime soon, if ever. That said, there is another pretty badass-looking electric truck from Ford on the horizon: The F-150 Lightning. Scheduled to debut next year, the all-electric pickup will be a first from the manufacturer, and offers zero emissions at no cost to power. If we were to put money on it, we’d say that its new trucks like the Lightning (and not, say, a certain Cybertruck) that will convince Americans to make the switch as soon as possible.