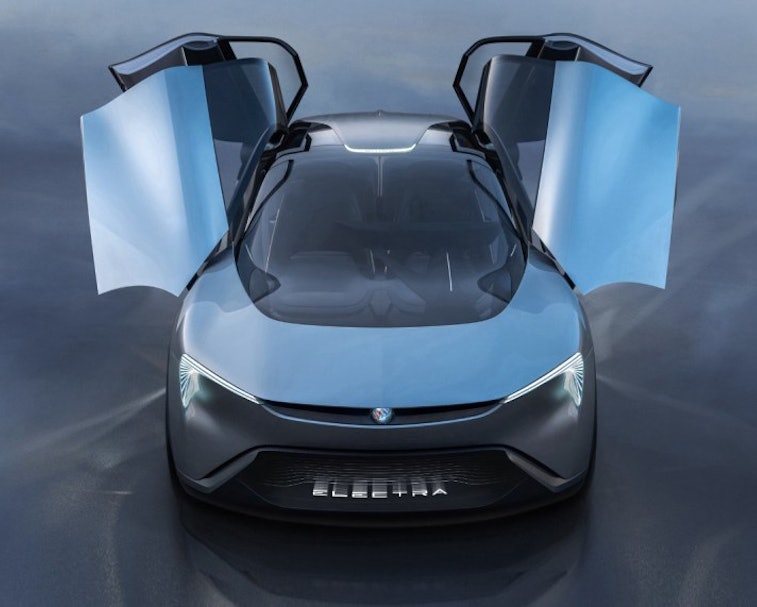 From its name alone, Buick's discontinued Electra is just begging for electrification. This isn't lost on GM, which has revived the luxury vehicle in a new, all-electric, crossover concept. The automaker claims that with its Ultium battery technology, the car would have a range of over 400 miles on a charge. Ultium is GM's new electric-based platform that'll also be showing up in the Cadillac Lyriq. But, as good as the Lyriq looks, the Electra is even better.

GM's electric bet — The car looks very much like a concept, and GM's comments refer to it as a "global concept" that represents "a sneak peek at Buick's vision for a new intelligent electric future." In other words, this is a teaser of what's to come, but what eventually arrives could look nothing like it. The company emphasizes the Ultium battery system and platform, which is the same technology GM had said it would bring to its now doubtful partnership with zero-emissions automotive startup Nikola.

Under that deal, Nikola would pay GM to manufacture its hydrogen-electric fuel cell semi-truck, the Nikola One. By bringing on a partner like Nikola, GM could begin recouping the costs of developing Ultium. But questions have arisen about whether or not Nikola has lied over the years about its progress in developing the truck. GM is still in negotiations regarding that deal.

The Electra isn't the first car that GM has brought back from the dead in electric form. The automaker has already confirmed it will produce a revived Hummer SUV as an electric vehicle under its GMC brand. While giving off zero emissions, it'll boast up to 1,000 horsepower and deliver 11,500 lb-ft of torque. GM claims it will reach 0-60 mph in three seconds when the first deliveries begin in 2021.

Bold numeric claims — In regards to the Electra concept, GM says the theoretical car would have a range of 410 miles and hit 0-60 in 4.3 seconds on a powertrain with 435 kW output. That's not crazy acceleration, but it's a bold mileage claim. One that may, of course, never need to be backed up.

Of course, we're probably not going to see this car — especially not in the form shown here. Those doors would be expensive to create, for one, and it has a pretty crazy non-traditional dashboard on the inside. But if some of the design language survives we'll still be pleased.

Even still, at a time when Tesla is showing off new cars like the Model 3 and Model Y, and then selling them in volume, and VW is ramping production of the ID.3 and ID.4, it's a bit tiring to see yet another concept. Tesla is even talking about creating a $25,000 car that can do 250 miles between charges, but it's proven itself already. GM can give its imaginary car whatever range or power it wants, but it means little in reality. What will consumers actually be able to buy?