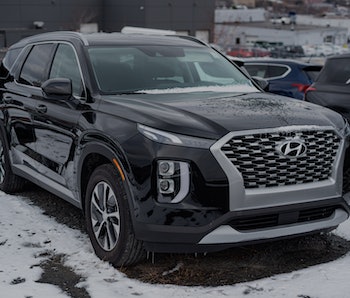 The Hyundai Palisade stinks. Well, to clarify, the SUV operates just fine, but in terms of literal olfactory offenses, a few owners have noticed their vehicles contain a "sharp chemical odor with a dash of something organic like garlic or rotten produce," according to reports on Cars.com. Now, after months of attempting to track down the source of what sounds like a pretty horrid aroma wafting around the $32,000 interiors, Hyundai has located the culprit. And the company's initial solution is... well, it's something.

Imitation leather and warm weather — As noted in the Cars.com article, "Hyundai traced the odor to the imitation leather coverings of head restraints in Palisade Limited and Calligraphy trim levels equipped with Nappa leather on the seats." When faced with higher temperatures, these materials sometimes began emitting what Hyundai very diplomatically and euphemistically referred to as an "objectionable odor."

According to the Korean carmaker, the reason it's taken over three months to identify the source is because of the problem's inconsistency, and the fact that sensory perception is relative. Also, while that familiar new car scent fades over time, the imitation leather stench reportedly only increases in awfulness and depends on local conditions, so for some people it took longer to reach and breach their own personal level of "Oh, hell no."

The worst suggested quick fix — Hyundai's solution? Spray some odor neutralizer on it. If that doesn't help, only then are Palisade owners eligible for a set of replacement parts made with a different combination of materials that (hopefully) won't make them want to vomit during their morning commutes. "It's a rare occurrence that they have to replace all seven headrests. The engineering team is confident in the process," a Hyundai spokesperson said.

A slap in the nose — Okay. So let's start with Hyundai's excuse, which basically amounts to, "Sure, it may smell like rancid produce to some people, but others don't mind it too much!" Sensory perception and tolerance vary from person to person, but we seriously doubt this garlicky "sharp chemical odor" ever smells tolerable. Then, when pressed for an actual solution, the carmaker first suggested its customers just Febreze the problem, which is essentially the nostril-themed equivalent of being told to unplug-and-replug your computer.

Really, Hyundai should just bite the seatbelt here and simply offer replacement parts to its Palisade owners (or, at the very least, offer a trade-in for its badass Mini EV for kids). In terms of recalls, it certainly wouldn't be the most costly ever to occur. Plus, "an SUV that smells like a dead raccoon" is certainly an embarrassing tagline for your product, but like any terrible odor, it's probably best to just open everything up, be transparent, and let the whole situation air out naturally. Besides, sketchy imitation leather and a questionable after-sales policy aren't nearly as irresponsible as offering drivers a bottle of tequila. But it still leaves a bad taste in the mouth, so to speak.