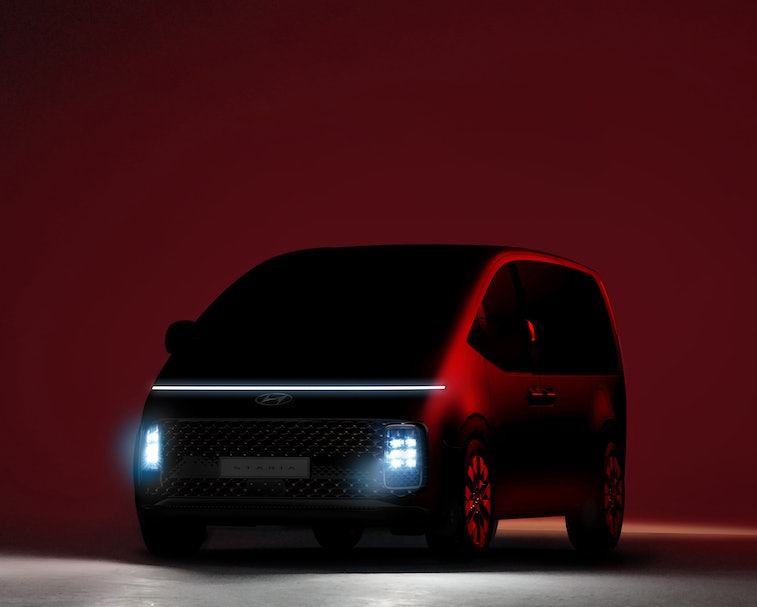 Hyundai today unveiled designs for the Staria, a new minivan that looks like a cross between a spaceship and a Nissan delivery van.

Minivans are all about practicality, and Hyundai says that the Staria brings with it design elements that are optimized for “productive” personal or commercial transport. That emphasis is the same reason why the new delivery vans the USPS recently unveiled look kind of goofy — style is secondary to carrying as big a load as possible. But the Staria still manages to pull off a futuristic look that might make driving a minivan feel less like a mark of old age and impending doom.

Futuristic and pragmatic — Unfortunately, automakers have come to rely heavily on shadowy silhouetted photos to show off new designs that aren’t quite ready yet, and Hyundai is no exception. But the pictures we do have of the Staria give a glimpse at a stubby-looking vehicle with a long, horizontal headlight and expansive panoramic windows that Hyundai even says lends the van that “spaceship vibe.”

The seatbelts are also lower and the height of the cabin is optimized for premium comfort and convenience the company says. The inside looks suitably roomy as you’d expect from a minivan.

The Staria’s design is in line with the futuristic (and daring) aesthetic that Hyundai has been pursuing for its upcoming line of Ioniq electric vehicles. There’s no word on whether the Staria will be electric, however. Hyundai is only saying that the car will be available in “select markets.”

Quality assurance — Hyundai faced a recent setback when it was forced to recall 82,000 Kona electric vehicles following a string of battery fires. The company blamed supplier LG Chem for the issues, but that company said that Hyundai’s implementation of fast charging is to blame. The Kona has been a strong selling EV for Hyundai. Reports indicate the automaker will source from a different battery supplier for its first in the Ioniq lineup, the Ioniq 5.

Tesla gets a lot of attention for its quality control issues, but legacy entrants are running into similar issues as they begin producing battery-powered drivetrains. GM has recently faced battery fire concerns in its Chevy Bolt. Actual instances of fires are still rare, however, but the situations underscore the importance of battery technology to the future of the automotive industry. Tesla has been developing its own batteries in-house so that it eventually won’t have to rely on third-party suppliers at all. That could prove a serious competitive advantage.