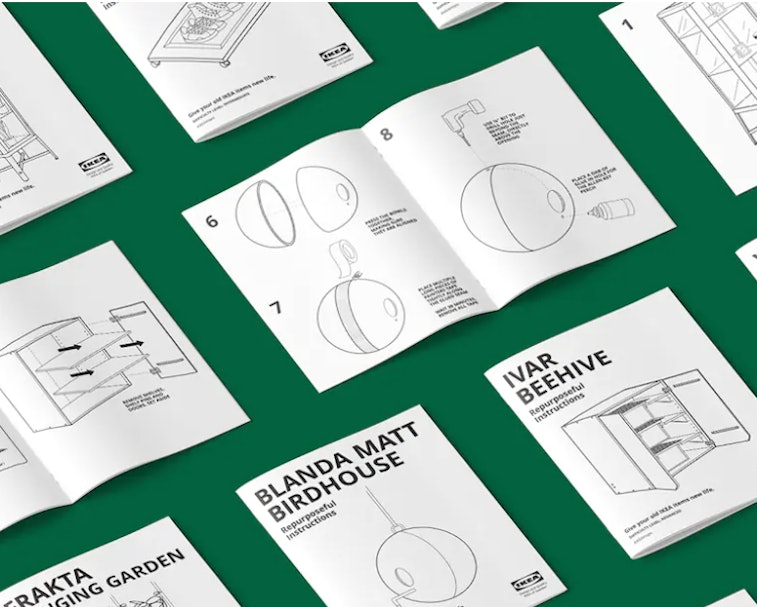 Unlike a lot of other corporations that push hollow eco-friendly PR, Ikea has been doing a lot to make good on its pledge to become more sustainable in an effort to reach its goal of becoming “fully circular” by the end of the decade. A few months back, the Swedish home furnishings company announced a line of disassembly how-to instruction manuals to help extend the lives of its products, and now it's taking things one step further with its “Repurposeful” projects.

“Ikea’s commitment to sustainability doesn’t end at our front door. With the launch of Repurposeful Instructions, Ikea wants to help breathe new life into old furniture that might otherwise end up in the landfill,” the company says in a press release.

The first batch of free PDF guides provides customers with some pretty crafty ideas for upcycling old Ikea products into entirely new items — from hanging planters, to terrariums, to a beehive. Check out a quick 30-second spot for the planter example below, along with a few more nifty examples.

Not only relying on its customers to make changes — While home upcycling projects like Ikea’s “Blanda Matt Birdhouse” are great, those kinds of individual changes only do so much unless corporations make huge alterations themselves. Luckily, it looks like Ikea is up to the task so far.

Last year alone, the company announced it would cease selling non-rechargeable batteries, discontinued its long-running print catalog in favor of a digital-only verion, launched its first secondhand store, and even bought nearly 11,000 acres of forest in Georgia to save it from destruction.

Compare that to other big-name retailers that destroy perfectly good but unsold inventory for no reason other than to save cash, and it’s really clear that Ikea is one of the world’s leaders for how to properly adapt to our brave new (rapidly heating) world.

And, while not as important, it still feels good to say: we’re all-but-certain we won’t be seeing Ikea’s CEO flying off to outer space anytime soon. Look, we concede that’s a low bar, but we’ll take it.