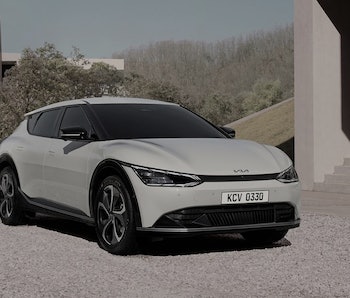 Korean automaker Kia has unveiled its first electric car featuring the updated design philosophy that will define its future battery-electric lineup. The EV6, as it’s called, is the automaker’s first vehicle that will exclusively be sold as an EV.

Kia already sells the popular Niro EV, but that car is also available as a hybrid. It has said it plans to release seven dedicated battery-electric cars by 2027.

Sparse details — Complete details on the EV6 won’t be released until its official premiere later this month, but the car is based on parent company Hyundai’s E-GMP platform. The EV6 will generally share its underlying drivetrain and battery technology with Hyundai’s other upcoming vehicles, and Hyundai says that cars on the platform will be able to charge very quickly.

A string of battery fires involving Hyundai’s Kona EV recently triggered a recall of 82,000 vehicles at a cost of roughly $900 million. The automaker has placed blame for the issue with its supplier LG Chem, but that company says Hyundai’s implementation of fast-charging is the root cause. It’s still unclear how the issue will be resolved, but the recall is a setback for Hyundai, which has seen the Kona EV become its best-selling electric vehicle to date. Batteries are the most expensive component in electric vehicles, and perfecting the technology is crucial to the future of automotive companies like Hyundai.

“Digital tiger face” — Kia describes the EV6 as featuring a “crossover-inspired” aesthetic on the side profile with a front that drops the grille of gas cars for a look that it describes as a “digital tiger face.”

On the inside, the EV6 sees increased cabin space thanks to the architecture of the E-GMP platform, making for a “unique spatial and driving experience.” The car’s badge has been updated to reflect Kia’s new logo, too.

TBD — There’s not much else to really comment on regarding the EV6 beyond its design until we learn more about pricing and specs. But as a generally more price-accessible marque, Kia could have a winner on its hands with the EV6. We like that it doesn’t try to scream that it’s an EV by looking overly futuristic, but at the same time, it also doesn’t try and look too much like a gas car by incorporating the fake grilles that are common in EVs.

Hopefully, the specs and pricing of the EV6 will be as impressive as its exterior.