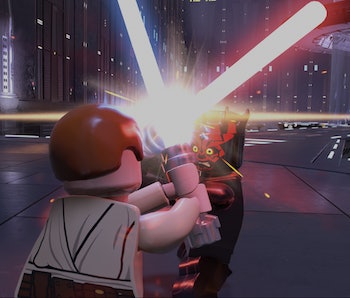 If Star Wars had never been created, May 4 would just be another day lost in the endless passage of time. Since sounding out that particular date comes fairly close to the expression “May the force be with you,” it’s morphed into an annual celebration of all things related to the franchise. Accordingly, Microsoft has partnered with Lego to release a set of themed Xbox Series S consoles based on the latest collab with the toymaker — LEGO Star Wars: The Skywalker Saga.

You won’t be able to head to Best Buy to grab one, though. Microsoft wants you to have one for free — as long as you don’t mind interacting with the company on social media.

The LEGO Star Wars consoles are only available by entering Microsoft’s official giveaway. Here’s what you need to do:

The contest begins today and will run through May 31 at 8 p.m. PDT. Microsoft has used this limited-edition giveaway formula for other fun collabs, like these fuzzy Sonic controllers and a tartan plaid controller endorsed by the Scottish Tartans Authority.

Prestige sells — Skywalker Saga, which is based on the original Star Wars trilogy, released to fairly positive reviews, managing to overtake Elden Ring as the top-selling video game shortly after its debut. There have already been scalping problems associated with the game, but those are confined to the deluxe edition and its accompanying Luke Skywalker mini-figure.

The special-edition consoles look pretty slick, considering they lean into muted colorways. Even the more eye-popping colors, like the lime-green Yoda, aren’t overwhelming.

Good luck to anyone trying to get their hands on one — and May the Fourth be with you.