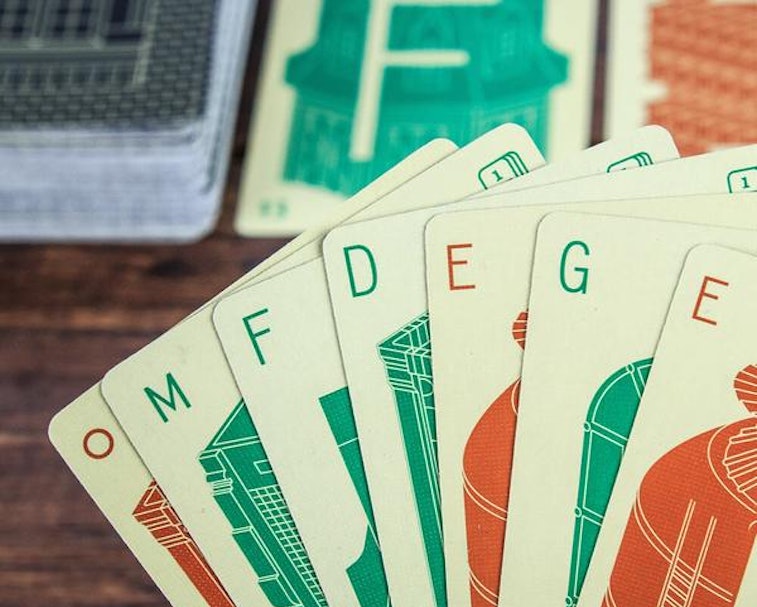 Breaking Games' Letter Tycoon was my gateway tabletop game. Sure, there were childhood games and the occasional college game night, but my merriment as an adult shifted squarely towards nightlife. Idly dragged through the stacks at an LA-area game shop, however, a bright, ornate box caught my eye.

Reading the description raised concerns that I’d entered a version of The Truman Show because it sits at the direct intersection of some of my most bougie interests: stocks, patents, poker, thoughtful design, and $10 words. If you’re an outsider or casual tabletop gamer, you might be stronger than I am and can avoid eventually owning several sets of dice, a binder of cleric spells, and an unhealthy card game obsession. But even if you too succumb to the power of this world, Letter Tycoon is absolutely worth it.

Collect letter patents to earn royalties and invoke unique privileges. Patents, money and stocks add up to victory. Test your linguistic skills... and your relationships.

Two to five players draw seven cards with letters on them. They can use their hand and the three community cards to create words that earn them stocks and money based on how many letters are used. Both forms of currency come in white $1 and black $3 versions, mirroring poker chips. Coins look like miniaturized, standard poker chip while stock certificates are like similarly small versions of rectangular, high-stakes plaque chips. Can you tell I was an eighth-grade card shark?

Own the letters, own your opponents — This earned money can be used to buy the patent to one of the letters in the word they played. In subsequent turns, players get paid for any words using patented letters. To minimize any Monopoly-esque rage-induced table-flipping, this money comes from the bank, not the player, but they will still be mad about it. To make up for their rarity, letters like Z and K also grant special abilities that can do anything from increasing a word’s value to letting a player build more than one word in a turn.

Like in Scrabble, words can be challenged and looked up in a dictionary. The challenger risks a $1 fine, but the player could lose all money earned from the word, a card from their hand, and their turn that round.

The game ends when someone hits the goal amount for patent value, which differs depending on how many people are playing. It can also end when your friends decide they don’t want to associate with a capitalist demon anymore. A little zeppelin token marks the starting player, but it mainly serves to trigger the last round where it acts more like the button in poker, allowing everyone to its left to play a final word. Just like in the real world, the person with the most wealth wins.

Why do you want this? — Winner of a 2015 Mensa Mind Games award, Letter Tycoon flexes several mental muscles at once. Strategy, money handling, vocabulary, and spelling skills collide with the rush of unknown probabilities and a good bluff. This is definitely a geeky, capitalist-forward romp, but like all good games, it pushes the limits of your interpersonal relationships. And what’s a game night without a little tension?