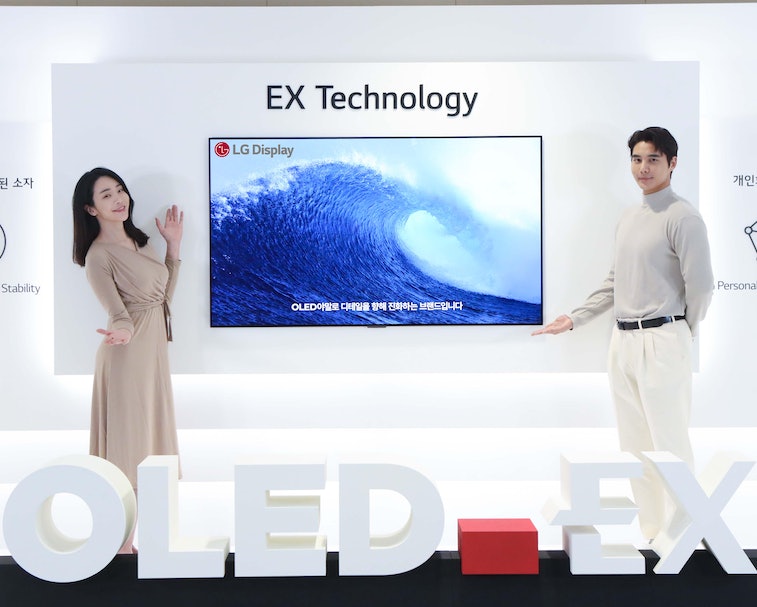 We’re really hitting sci-fi levels of TV technology. LG has announced its next generation of OLED displays, called OLED EX, that uses “deuterium compounds” to make screens that are 30 percent brighter, have better color accuracy and use machine learning.

While we haven’t seen the display tech in-person, LG’s OLED EX technology looks like an overall improvement to its existing lineup of OLED displays, which already have crisp image quality but paled in brightness to LCD counterparts. But LG’s OLED EX looks like it’s targeting the main downsides of OLED, including the crushed blacks and potential for burned images.

LG has been a leader in the OLED market for a while so it makes sense they’re trying to advance the market. The latest upgrade from LG also comes weeks after its competitor Samsung announced it was mass-producing its “Quantum Dot” OLED displays, a type of display that brings some of the advantages of quantum dot technology to OLED like improved brightness and color.

A brighter future for TV — Between deuterium compounds and quantum dot displays, it sounds a bit much for something you use for your annual Home Alone marathons. But don’t worry, you don’t have to be a scientist to enjoy how these displays perform.

LG’s OLED EX tech uses deuterium compounds — atoms that LG extracts from water — to make the light-emitting diodes that create the picture on-screen. But this new formula makes for diodes that give off much brighter light, making for a 30 percent brighter display. According to LG, the compounds also can maintain high efficiency for a long time.

In terms of how it affects picture quality, OLED EX was designed to achieve perfect blacks, which was probably meant to address regular OLED’s issues with murkiness when viewing a particularly dark piece of media. OLED EX is also meant to provide more accurate colors and a fast response time so it can even display the “reflection of sunlight on a river or each individual vein of a tree leaf,” according to LG.

LG has imbued its OLED EX with machine learning that builds a personalized algorithm to learn your viewing patterns and adjust the display’s energy input accordingly. But on a more basic level, LG was able to reduce the bezel thickness of its OLED EX displays to 4mm compared to the existing 6mm OLED displays.

Second quarter start — LG didn’t specify when these next-gen displays would be shipped to customers, but said that it will start integrating the OLED EX technology into all of its OLED displays starting from the second quarter of 2022.

In the meantime, the company is still exploring some cool concepts with its OLED displays, including a rollable TV and a two-in-one reclining chair and 55-inch OLED screen. For a more realistic setting, LG also recently designed a monitor with a 16:18 aspect ratio for the at-home workers out there.