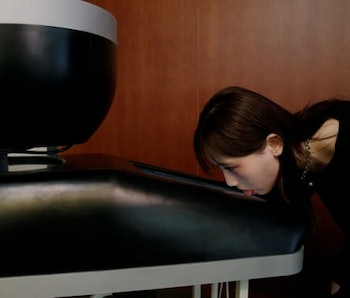 In an episode from the second season of How To with John Wilson, an HBO show created by and starring the NYC-based filmmaker John Wilson, we find ourselves at a production plant for a bowling ball manufacturer that creates scented bowling balls. The absurdity of something like a bowling ball having an extraneous feature, like a sherbet aroma, makes it difficult not to crack a smile. We’re kind of having that same reaction a new TV-flavoring device called Taste the TV (TTTV).

Developed by Homei Miyashita, a professor at Meiji University in Tokyo, and his team of 30 students, TTTV works by using a carousel of 10 flavor canisters that spray simultaneously to simulate the taste of a specific food. This flavor sample is then rolled on a sheet of hygienic film that is transferred over to a TV screen. From there, the viewer can try their hand at licking television.

"The goal is to make it possible for people to have the experience of something like eating at a restaurant on the other side of the world, even while staying at home," Miyashita said.

Not just a novelty— The mind might drift towards that scene in A Christmas Story, but TTTV allegedly has some useful applications. Miyashita explained that the device could be used in tasting games or quizzes, and distance learning for sommeliers and chefs. He is also in talks with companies that would like to use TTTV to apply pizza or chocolate flavoring to toasted bread.

The vision for TTTV is broad. Using the flavor technology, Miyashita aims to create a platform that would allow users to download and enjoy tastes from all over the world.

Miyashita and his team are no strangers to flavor — they’ve also created a fork that enhances the richness of food. The TTTV prototype was constructed by the professor alone, who claims bringing the device to commercial production would cost roughly 100,000 yen ($875).