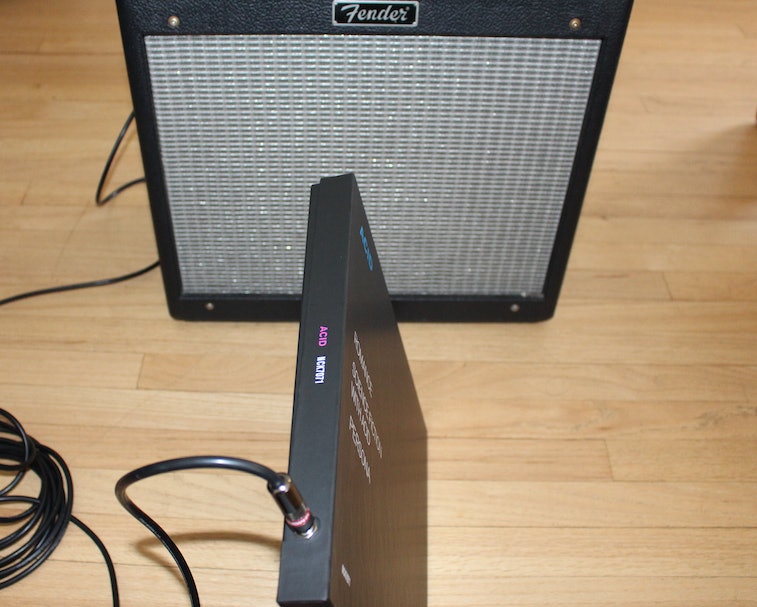 Vinyl fans will tell you there’s something ineffable but irreplicable about the sound of a record when compared to an mp3. That is, the physical produces sonic subtleties the digital cannot. We suspect Los Angeles-based band Acid would agree. Because not only has it made the bolshy move of releasing a triple (!) album on glorious, 181-gram vinyl, but it’s made the box the set comes in playable, and the records themselves light sensitive, so you can paint them with the included laser pen.

The so-called “Acid Box” includes a 1/4-inch hack like you’d find on on a guitar or bass (or pre-amp-packing ukulele for that matter), so buyers can plug it into an amplifier and then turn it into a percussive instrument by tapping, thumping, caressing, or otherwise messing with the box.

Check out the video below for some suggestions as to how you might “play” it:

Boom box — Acid is Jeff Hassay and Imaad Wasif, and the pair have decided to release each of the three albums (“Romance,” “Science fiction with acid,” and “Persona”) in the “Acid Box” separately, too, but we suspect buying the three of them together will provide the most satisfaction.

The album is being released by Narnack Records, and the special edition includes the aforementioned laser pen along with a limited edition poster.

If you’re in need of some inspiration, you might want to try the debut single “Penetration” from Acid’s new album. Check out the psychedelic, fan-laden, and muppet-packed video for it below:

More like this
Matt Wille
6.22.2022 8:30 PM
Q&A
Susie Ibarra and Richard Reed Parry on writing music to their heartbeats
Ian Campbell
3 hours ago
This Thing Rules
Poolsuite FM is a summer oasis on even the longest work day
Andrea Carrillo
6.24.2022 3:00 PM
Style
Gucci unveils an NFT gallery with 'The Next 100 Years of Gucci'