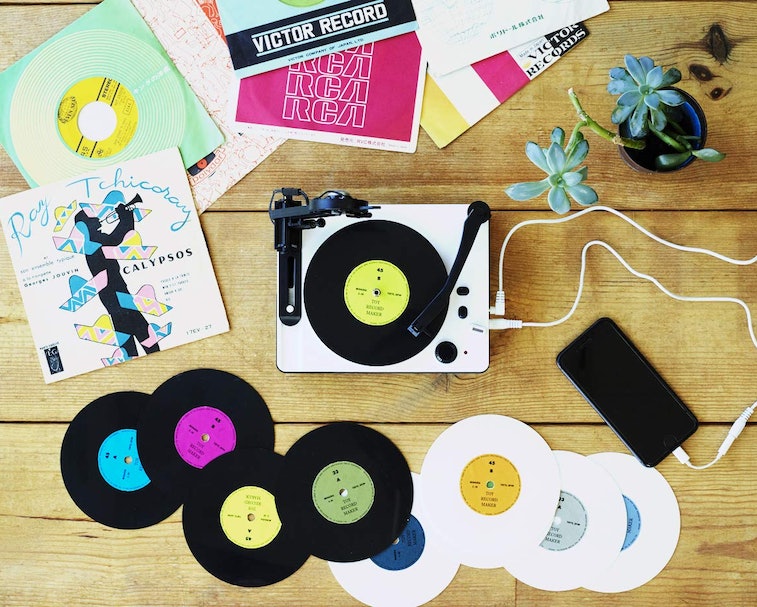 Despite its expense and inconvenience, vinyl's comeback continues. Maybe it's the allure of analog audio fidelity. Perhaps its the jumbo artwork. Maybe it's the deliberate listening it encourages. Whatever it is, Japanese designer Yuri Suzuki has capitalized on the format's resurgence and partnered with magazine publisher Gakken to release a build-it-yourself record cutting machine.

The machine takes about an hour to build and includes the ability to both cut 5-inch vinyl records and play them back. Users can input audio via USB or from anything they can plug a 3.5mm auxiliary cable into — so, umm, not a recent flagship phone then, unless they have the requisite adapter — and there's the choice of 33 RPM or 45 RPM. The former will provide around four minutes of audio per side, and the latter around three.

So, you're not going to be recording any of Mogwai's sprawling post-rock tracks this way, but then, from a copyright perspective, you shouldn't be using other people's music without their permission anyway. Not that there's anything to stop you doing so, of course, other than perhaps your conscience.

Coming to the U.S. soon — There are plans to bring the Instant Record Cutting Machine to the U.S. before the holidays. Pricing in Japan starts at ¥8,778 (~$80) for the simplest package with 10 records (five black, five white) and two needles, and tops out at ¥10,428 (~$100) for the edition with two additional cutting needles and an additional fifteen blanks, five blue, five yellow, and five green.

Suzuki's studio designed the machine and its interface, while publisher Gakken handled the actual manufacturing and — initially — distributed it under the name "Toy Record Maker" with its Adult Science Magazine Series. There it came with a print magazine explaining the design process and how vinyl cutting works. We'd love to see that translated into English and packaged with the U.S. version.

The whole project has been five years in the making and started with Suzuki and Gakken talking about how to make and distribute affordable and accessibly DIY musical instruments. How it wound up making an assemble-at-home record cutter is unclear, but we're not complaining.

Caveat emptor — Reviewers on Amazon Japan suggest the process is very hit and miss, and buyers are advised to get the version with the additional blanks to allow for some trial and error. If you're looking to create commercial-grade records, this is obviously not the way to go. But if you're looking for a unique gift for a crate-digging relative or buddy, this might be just the ticket. And if you're not musically inclined, you can always record a voice note instead and have the fanciest personalized Christmas card of the season.