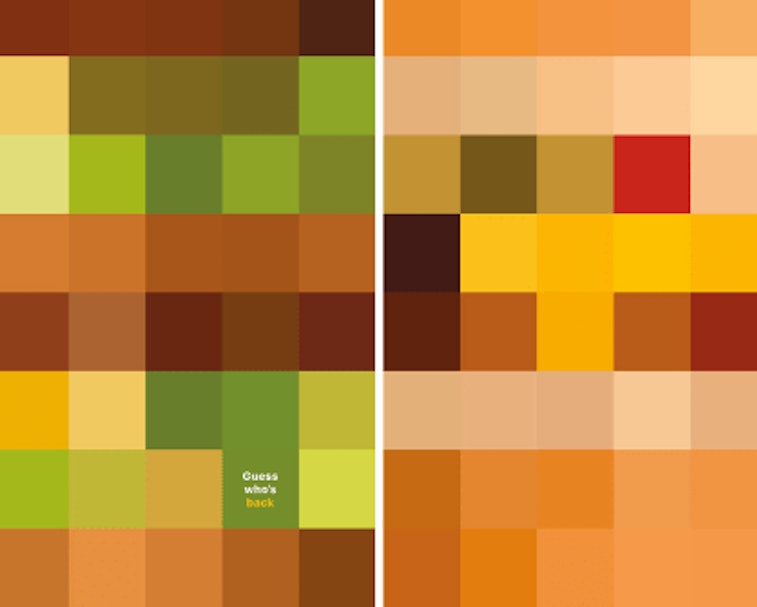 McDonald’s marketing has always been quite distinct and, most importantly, memorable (Buh-duh-buh-bah-bah — I’m lovin’ it). Sometimes that can mean promotional material that feels somewhat stale or too familiar — but a new round of ads from the fast-food company proves it still knows how to have a good time.

The new ads seem to fit more into the sphere of retro gaming than they do into the world of fast food. They’re comprised of chunky, colorful pixels that, when grouped together, approximate the appearance of a McDonald’s classic like a Double Quarter-Pounder With Cheese or a carton of fries.

Each pixelated image is printed with a small, cheeky ad slogan: Guess who’s back. The campaign is meant to draw attention to the fact that McDonald’s stores are once again open for business again around the world after a very long year-and-a-few-month’s of COVID-19 restrictions.

If you couldn’t guess, the answer is McDonald’s, by the way.

Can you guess? — McDonald’s knows it’s iconic. The fast-food chain’s impact on culture is undeniable. The company’s products are so ubiquitous, now, that it doesn’t even need to put its name or a logo on advertisements — we know it’s McDonald’s without a second thought.

McDonald’s has been bragging about its brand recognition for years. The company worked with agency TBWA Paris on a “no-brand” campaign that consisted of super minimalist illustrations of burgers and fries. Now the company’s teamed up with TBWA again on the pixelated campaign.

If the first set of ads turned McDonald’s products into icons, the new campaign proves those icons don’t even need to be distinct to be recognizable.

Just abstract enough — McDonald’s’ marketing has verged on overblown, at times, which makes sense — how do you market a company that everyone already knows about? That’s pushed the company toward strong-willed merch and collabs, most notably with rapper Travis Scott (who, by the way, reportedly made $15 million from the deal).

In that context, the new pixelated ads are really quite refreshing. Yes, they’re also a little cocky, but this is McDonald’s we’re talking about. That comes with the territory. Will these groups of pixels actually help the company sell any more burgers than it already is? If so, maybe McDonald’s will finally consider actually paying its workers a living wage. What, we can dream, can’t we?