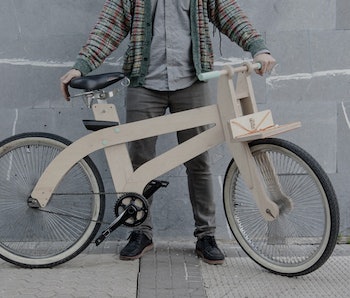 A bicycle made out of plywood comes with some obvious issues. If a thief wants your wheels or seat, all they need is a saw. Also, plywood isn’t great in the wet. And the frame of a wood bicycle would have to be heavy to offer comparable strength to steel or aluminum. Nonetheless, an architecture studio out of Spain that focuses on sustainability has designed an open-source bicycle called “Openbike” that can be can be constructed with not much more than off-the-shelf plywood.

The project isn’t really about the bike itself, though, but rather the idea that people should think about how they can contribute to a better, more sustainable future.

“This is not about bicycles!” reads the Openbike website. “Open your eyes, this is about you, about your attitude towards the future. Do you think that the pollution of the cities will disappear by itself? Do you think traffic jams are caused by others?”

Do your part — There’s a guide on the website which outlines the four steps you’ll need to go through the build an Openbike. Four different revisions have been made since 2015, the most recent of which was released in 2019. The latest model incorporates front and rear grills which are intended for transporting goods. It also has a fork design that apparently allows for wider turns. The website includes a full list of tools you’ll need, including components you can reuse from other bikes or get from a bike store, like a chain and pedals.

All in, it will probably cost you a couple hundred dollars to make the Openbike including materials and labor of a manufacturer who can do all the milling. But plywood is recyclable, so you can dispose of the bike frame sustainably when it reaches its end of life. And because you’re making the bike locally, there won’t be the same emissions caused by transporting it from overseas. Of course, riding a bicycle (plywood or not) will also alleviate congestion and pollution in dense urban environments, too.

High concept — Is the Openbike a novelty? Yes. But it also gets you thinking about how everyone can do their part to support the environment. It could be a fun project to make the bike, and if it rides well, you’d probably feel pretty good about yourself too. What if we all thought more about the environmental impact of our purchases, all the way down to the energy used to fabricate their key components? Maybe we’d consider them more.

“We believe that the big changes start with you,” concludes the Openbike site, “so download, make, modify and share.”

More like this
Will Gendron
Sep. 16, 2022
Design
Campworks's electric camper is an off-grid powerhouse
Jackson Chen
Sep. 17, 2022
Tech
Zero’s long-range e-motorcycle is a beast on and off the road
Raymond Wong
Sep. 14, 2022
Reviews
iPhone 14 Pro & Pro Max review: The 48-megapixel camera is legit