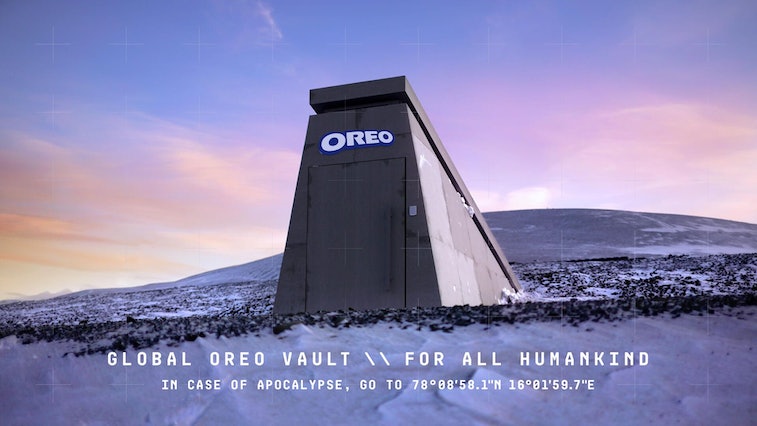 Asteroid 2018 VP1, dubbed the "Election Day Asteroid" because it's scheduled to graze Earth on November 2nd, has a slim chance of entering Earth's atmosphere, and even if it does it will disintegrate before impact. But Oreo isn't taking any chances and created a doomsday vault in Norway to house its cookies in preparation for the worst possible scenarios.

It's a pretty excessive marketing stunt but then again, who hasn't gone to great lengths to stash their cookies?

The design of the vault was inspired by the Svalbard Global Seed Vault that's meant to preserve the world's agricultural legacy against natural or human-caused disaster. Oreo's version is nearby and quite a bit smaller, but we think more important for preserving our way of life.

Thank you, Oreo — In a video about the Global Oreo Vault project, the company says it was inspired by a tweet from a fan on October 3rd asking if the asteroid strikes, "I wonder who will save the Oreos?" It then sprung into action, working with one of the same architects who designed the seed vault. Except instead of having two years to design the vault as he did with that one, in this case, he had just thirty days before the asteroid reaches us to get the Oreos safely stashed in permafrost.

"As an added precaution, the Oreo packs are wrapped in mylar, which can withstand temperatures from -80 degrees to 300 degrees Fahrenheit and is impervious to chemical reactions, moisture and air, keeping the cookies fresh and protected for years to come," Oreo said.

The video is kind of dramatic but definitely made us feel like crying. Happy tears, of course, knowing that the delicious Oreo will be saved for generations to come.