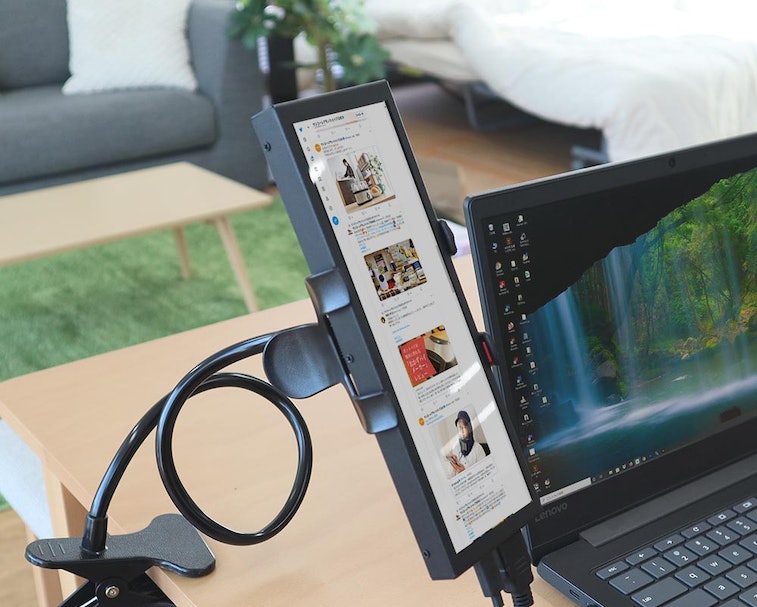 If you’re the type of person who’s obsessively scrolling Twitter all day long, you might as well get an entire side monitor to feed your habit. Japanese gadget brand, Thanko, is giving you just that with an ultra-tall, 5:16 aspect ratio monitor specifically designed for endless scroll.

According to Thanko, the monitor was made for those Twitter users who relentlessly check their feeds, but it looks like it can be just as useful when configured as a second monitor for Slack, Discord or any other messaging app. Thanko even showed that the display can be set up horizontally for a more cyberdeck-esque viewing that displays your computer hardware’s performance.

The portable ultra-tall monitor space is a relatively unexplored one, but another Japanese brand called Elsonic put out a similar monitor last year. For a more practical monitor that’s still taller than it is wide, LG recently showed off its 16:18 display that looks like it was designed with at-home workers in mind

Scroll on — As for the Thanko monitor, we’re not really sure of how it’s built, but it’s probably safe to say that we shouldn’t expect any super high-end display technology. The 7.9-inch Thanko monitor only has a resolution of 1280 x 400, but is light enough to carry around since it weighs about 0.4 lbs. There’s no built-in speaker, but you shouldn’t really need one since it’ll mostly serve as a secondary monitor that can be connected through a USB-C or HDMI port.

Thanko’s images also show that the display can be set up on a stand or attached to a desk clamp, but these extras are not included. Given the size of the monitor, it looks like it can probably fit most of the adjustable stands or mounts that you can find anywhere. Thanko said the monitor should work fine on Windows, but Mac users might run into some compatibility issues. The display’s unique resolution may not be recognized on the latest macOS Monterey, but it can be used with the previous macOS, Big Sur, according to Thanko.

Weird, but wonderful — The ultra-tall monitor is already available on Thanko’s website for ￥11,200 or roughly $97. Even though we’re not exactly sure how well-built the display is, it seems like a reasonable price if all you want to do is further engrain your unhealthy Twitter habits.

And if you’re not familiar with Thanko, I can only describe it as a Japanese shop that sells weirdly innovative novelties. Think: stuff you didn’t know you needed, like this mini fridge for your cosmetics, or whatever this is.