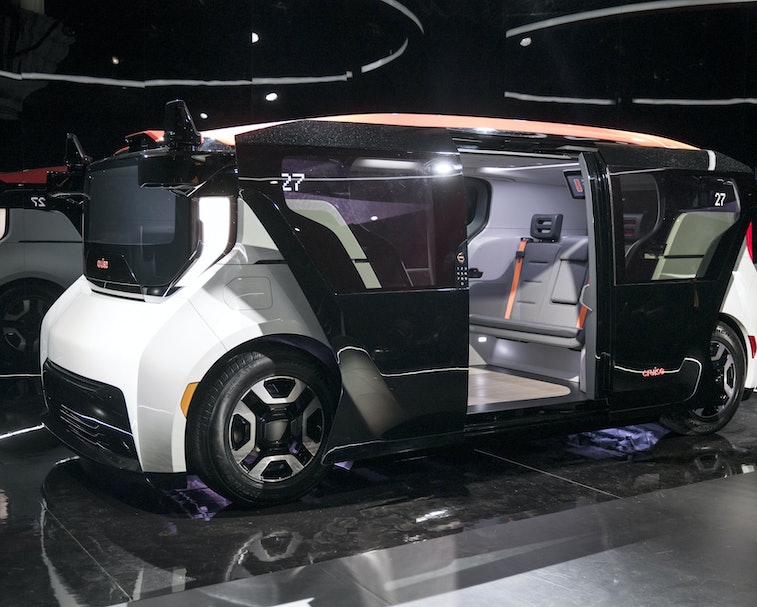 Cruise, the autonomous vehicle company in which GM has a majority stake, has unveiled its vision of the next big evolution of transportation. Optimistically, it’s calling its six-seater the “Origin.” But, despite the company’s stated intentions to mass-produce the Origin and take it to San Francisco’s streets, in every important way it’s a still concept car.

With a name like a Scientology-inspired comic book and an exterior like a mysterious kitchen appliance, the Origin has no release date, no planned production start date or volume estimates. The details of the sensors it includes haven’t been released and, at a glance, it’s hard to even tell which end is the one that goes forward. That, folks, makes it an advertisement for Cruise’s — and, ergo, GM’s — autonomous ambitions, not something to start considering as part of your commute choices.

No steering wheel? Big problem — First, there’s no steering wheel, no pedals, and none of the other conventional accouterments that suggest the option for a human being to take the reins if necessary. That’s not unprecedented. Hyundai’s Mobis, Icona’s Nucleus and Google’s now-retired Firefly have all ditched the human controls in favor of a living-room-on-wheels-style interior. The problem, though, is that if you want to get a vehicle past legislators and into production, it needs a steering wheel.

Next up are the bold, admirable, but ultimately hubristic claims Cruise makes about the Origin. Cruise envisions the Origin having a lifespan of a million miles thanks to easily swappable components and intends it to serve as an autonomous, ride-sharing taxi rather than a private vehicle for the large-of-family, or the designated Little League team transporter.

Again, Waymo and Uber have similar visions of a full-use, no-ownership motoring future, but by the time self-driving tech and legislation have sufficiently progressed to make cars like the Origin a reality, what looks futuristic about it today will probably look painfully dated.

Strange use of space — The Origin seats six people, three at the front, three at the rear, all facing towards the large space in the middle of the vehicle between the sliding doors on each flank. Aiming for something more akin to a karaoke booth than office cubicles might seem futuristic, but practically speaking, some separation might be better. Uber Pool rides are weird enough without facing the strangers you’re sharing a ride with. And when you’re going to the airport, you need space for your luggage.

But, facing each other is what you do on trains, which is probably a more sensible rubric to use when talking about the Origin. If it’s going to move luggage, groceries, or — as hinted at during its unveiling — freight, the Origin is going to need somewhere to put all of that stuff. What about baby seats? Those are going to need Isofix mounts. And how about some handles getting in and out? All of these things are going to mean some changes to Origin's design.

I’m all for our driverless future, but when there are still so many steps between us and it, pretty much anything we’ve seen at CES or on automaker’s websites remain the very definition of “concept,” regardless of what they tell us to the contrary.

Getting rid of drivers is really hard — Driverless cars are complicated. Insanely complicated. Getting a car to reliably and safely drive itself makes the moon landing look comparatively straightforward. Why? Because aside from a few satellites and some space junk, between here and the moon there are almost no obstacles.

Between my apartment and the nearest bodega, meanwhile, there’s a litany of potential tragedies and lawsuits: schoolchildren, adult pedestrians, potholes, squirrels, poorly parked cars. An autonomous car has to consistently and safely navigate a constantly changing environment. Equally challenging is convincing regulators it can do so well enough to let it on the road.

Autonomous vehicles, like plenty of technologies before them, will likely arrive like bankruptcy: slowly at first, and then all at once. But there’ll be hints along the way. That arrival is still many millions of test miles away though, and thinking our driverless future will look like the concepts we’re seeing today is endearing, but pure fantasy.

Nonetheless, these concepts remind us that the future is inevitably coming. That’s how the future works. It’s just going to take longer than we’d like it to. But isn’t that always the case?