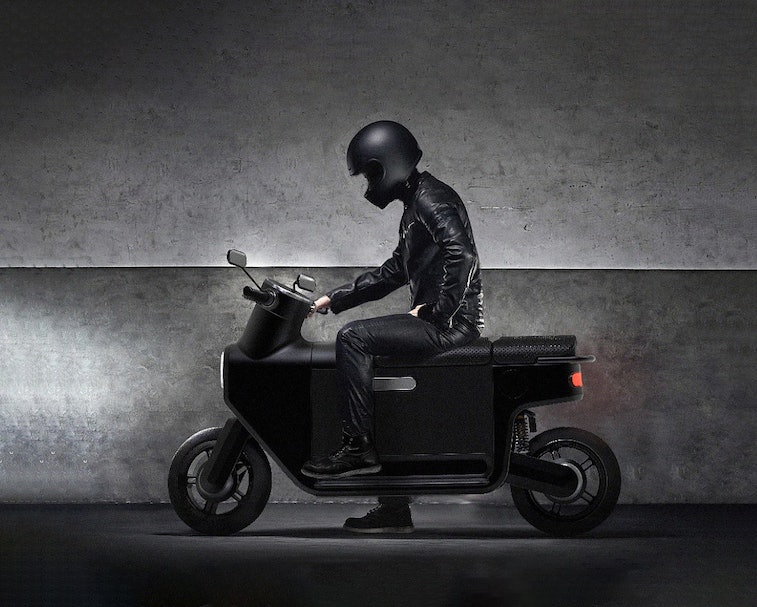 Pretty much since their inception, scooters have stuck to one design. They've tended to put the rider in an upright, seated position, with space for their feet behind the handlebars, and a seat with a battery, fuel tank, and a sliver of storage space beneath it. But those scooters were made for burning fossil fuels and careening around the streets of Paris, lover behind you with their arms around your waist, while you clutched a bag of charcuterie, cheese, a baguette, and a bottle of wine between your knees. That's not what 2020 needs, oh no, what we need is storage space to make our battery-powered getaway when the time comes.

Designer Ezekiel Ring recognized the scooter was ripe for a 21st-century redesign, one that speaks to the unique demands of our era. To that end, his CAD scooter design forgoes the legroom and triples the available storage instead, which creates plenty of space for a go-bag and other get-out-of-dodge cargo. It's also narrower than a traditional scooter, which means it's easier to park in tight spaces... or to secret away down an alley during the long, lonely nights while the fallout dust settles.

Stash and dash — Instead of having to lift the seat to get to the storage compartment, it opens on the left-hand side, and there's enough space for two full-sized helmets, or, well, an irresponsible quantity of baked goods that are never going to last, so you should really dedicate that space to canned goods and some sort of water purification device instead. Maybe a small solar generator to keep you topped up as you scour the ravaged landscape for other survivors?

Beneath the driver's seat, there's room for a smartphone and other basics (a pistol, perhaps?). A USB port lets you charge your phone from the pair of removable batteries that hide under the passenger seat. Connecting a phone also lets you use the built-in circular display for navigation (assuming GPS and GLONASS are still working, that is) and to check the scooter's vital stats.

Also available in inferno red — Assuming you can find power, the batteries can be charged while attached to the scooter, or on their own. And you'd likely be able to jerry-rig them to power more than just your (probably now-useless) smartphone. Like other futuristic-looking rides, the headlight, turn signals, and taillights are built into the scooter, and Ring imagines it being offered in a range of hues, both post-apocalyptic, gray, black and blue variants, and far more cheerful, primary ones.

Is a scooter as attention-grabbing as some of our other apocalypse-friendly rides like the Verge TS? Nope. But perhaps attention isn't what you're after when you're battling the other dregs of humanity for scarce and hotly-contested life-sustaining resources. And if we have to choose between speed or luggage capacity, there's really no contest. Traveling light isn't one of our virtues.

Tragically, Ring's scooter is merely a concept for now. Thankfully, the end of the world is, too. But we remain optimistic his ideas will cross the desk of someone with the means and vision to make it a reality.