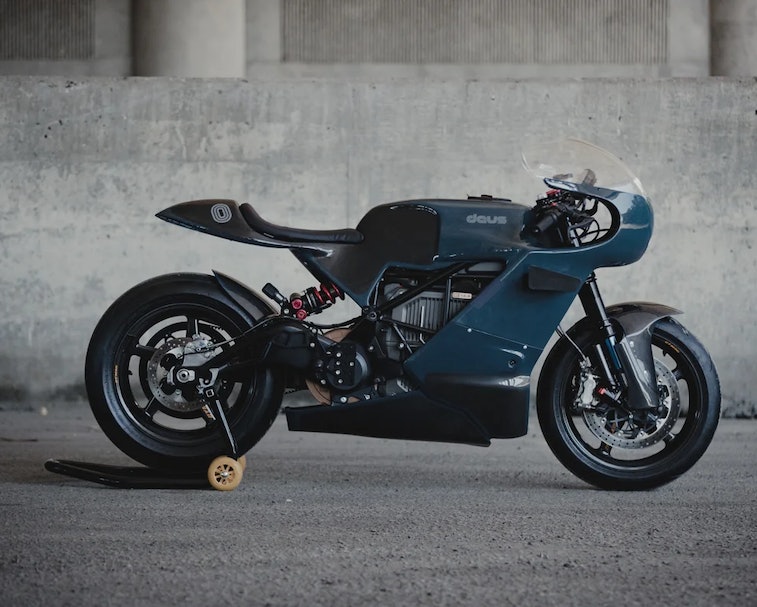 This week Zero showed off its full 2021 lineup of electric motorcycles, including the powerful SR/S announced back in February. To coincide with the launch, the company recently teamed up with West Coast customs shop Deus Ex Machina to create a one-of-a-kind SR/S.

The SR/S, announced back in February, offers a more relaxed riding experience than a regular racing bike. The company accomplished this by lowering the footpegs and raising the handlebars to create a less aggressive riding position. It gets 201 miles of range if you purchase a separate Power Tank, making a comfortable ride that doubly important. We suspect we'd be very comfortable on the Deus custom SR/S indeed.

Outside the box — Zero sometimes collaborates with designers who are able to push its bike platform in new directions. Electric motorcycles are far simpler than their combustion engine counterparts because they don't have a gas tank or internal combustion engine, and they don't need complicated gearboxes, clutches, or the other trapping of the engines of yesteryear. That means designers have more flexibility in terms of aesthetics.

Deus Ex Machina designer Michael Woolaway took the core design of the new SR/S and customized it, adding great touches like a vintage lightning bolt symbol on the seat and a custom carbon-fiber frame. He also added winglets of the sort you'd usually find on a race car rather than a motorcycle. Apparently, they not only look cool, but they also stabilize the bike at high speeds.

It's an arresting design that marries new tech with classic cafe racer style — a departure from the futuristic styles we've seen in other electric bikes like the Tarform Luna or the Arc Vector.

Minor updates — Unfortunately you can't buy this custom SR/S bike, but you can order a standard SR/S at a starting price of $19,995. The bike has a top speed of 124 mph and is Zero's first fully-faired bike, which means it has a slick exterior with good aerodynamics and you can tuck your head behind the visor to get rid of wind blast. The SR/F is the same bike, but with a more naked design that changes the look and makes it a little less aerodynamic.

Zero's updated its entire range of street bikes including the FXS, S, SR, SR/F, and SR/S with new colorways and graphics. Prices start from as low as $9,295 for the FXS, a steal for a highway-capable electric motorcycle if you consider something like Harley Davidson's LiveWire starts at almost $30,000.

The main difference between these bikes is their range. The S and SR bikes offer higher speeds and more battery than the FXS with its maximum range of only 50 miles. The SR, pictured above, has the longest range at 223 miles on a single charge and starts at $15,495.

Zero also updated its dual-sport bikes, which are geared towards those who want to hit the trails. They have similar performance specs to the street bikes but include components like shocks that are more suited for off-road riding. They're dual purpose — you can use them for your commute and weekend adventures alike.

The DSR Black Forest is Zero's true all-adventure bike and is priced at $18,995 with upgrades meant for adventure riding. The standard DSR is priced at $15,495 and has the same range as the SR. The DS and FX have shorter ranges but cost $10,995 and $8,995 respectively. New matte grey, black, and green colorways are the biggest updates to the line this year.

Zero says all its new bikes run on either its Cypher II or Cypher III operating system. There's also a new motor in the SR/F and SR/S known as the ZForce ZF75-10 that's billed as Zero's most powerful motor to date.

No range improvements — The range and battery capacity of Zero's bikes haven't been updated this year, which will be disappointing to some. The added comfort in the SR/S is just begging for a longer range — it's a touring bike without the range to actually tour for very long. Zero chalks the lack of significant changes up to supply chain issues stemming from the coronavirus pandemic. But maybe something like the SR/S with a shorter range, and lower price, would be a better bike to market to people who just want to cruise around town in comfort rather than the demographic that actually wants to ride for hours.

The company recently announced it's partnering with Polaris to co-develop new electric bikes, so we may see more significant upgrades in the near future. Let's hope, as legacy makers like Yamaha continue to invest money into their own electric bike initiatives that may have more mass-market appeal.

Zero says its 2021 lineup is already shipping to dealers across North America and the EU.