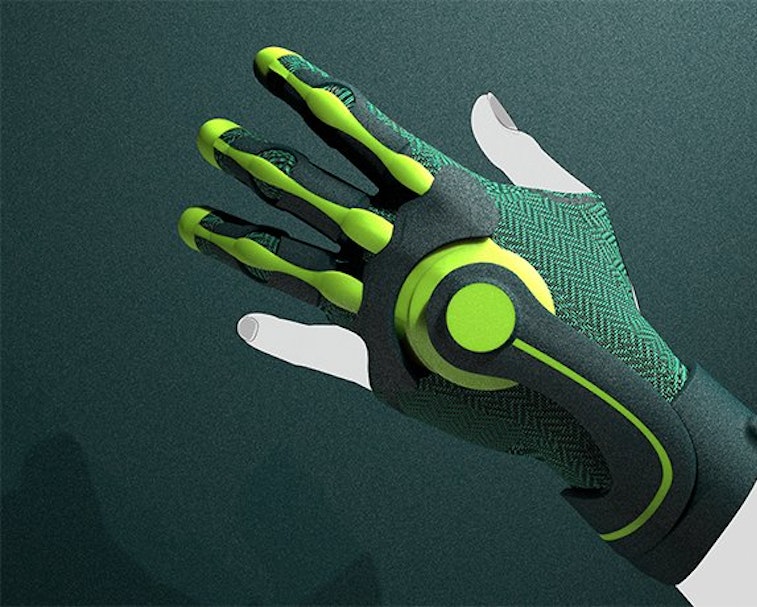 An Israeli design student has created the concept for a glove that would increase the strength of a wearer’s grip. Designer Lior Edri first began working on the glove, called “Gripit,” for applications in rock climbing, Designboom reports. But at a certain point, she turned her focus to parkour practitioners who arguably rely on their own grip to keep them out of death’s gaping maw even more.

And yes, parkour is still a thing. We’re as surprised as you are. But there you have it.

Robo-parkour — Technology is, at its core, a means to enhance human ability. In the case of the Gripit, electroactive polymers (EAP) in the gloves change in size or shape when stimulated by an electric field, activated by sensors in the glove. The EAP essentially function like artificial muscles to support the wearer and provide a heightened sense of security.

There already exist similar concepts on the market going all the way back to 1965, when GE and the U.S. Army developed the Hardiman, a powered exoskeleton that used hydraulics to amplify the wearer’s strength by a factor of twenty-five. The suit would make it so that lifting 240lbs felt more like lifting just 10. Newer systems like the Guardian are used in manufacturing and construction applications to safely lift and manipulate heavy objects without risk of injury.

But the Gripit gloves are small, and Edri says they would preserve ergonomics so that the wearer won't have a hard time moving their hands as they jump around and quickly grab onto surfaces:

As for the materiality I used three-dimensional knitting to give accuracy to the palms. connected by soldering-to-knitting and made of prints of TPE material (thermoplastic elastomer) which gives me the flexibility of the material with different stiffness. in some areas, there is rubber (XS EDGE) known from climbing shoes that increases friction and prevents slipping.

Limits of evolution — The concept is a pretty interesting one and is a reminder of how humans are so different from other creatures. People, unlike butterflies or mountain lions, managed to overcome the slow pace of natural evolution by creating new things that enhance their odds of survival, like vaccines.