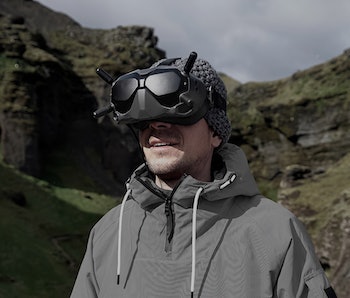 Enthusiasts for first-person view (FPV) drones might be thrilled to learn that a photo leak on Twitter and Weibo reveals a potential FPV drone from DJI, the world's top drone maker. As reported by DroneDJ, it looks like DJI could release this photogenic FPV design in the near future, which comes in a subdued gray shade with bladed props.

Leaked images show that this DJI FPV drone may come with FPV goggles and a controller. The canopy of the drone is possibly carrying its GPS and other components; the battery likely fits into the rear. Of course, it's impossible to give a definitive verdict on the DJI drone here but it looks decidedly different than DJI's previous aerial aircraft — this time, with an emphasis on FPV racing and navigation.

At this point, it's unclear who DJI is targeting with this new FPV drone. Many drone enthusiasts speculate it could remain a drone for capturing cinematic footage at fast speeds rather than a racing drone. If this truly is a DJI FPV drone, we have essentially received confirmation that the company is far from being done with releasing products. In fact, DJI seems eager to end 2020 — a dastardly year — on a strong note.