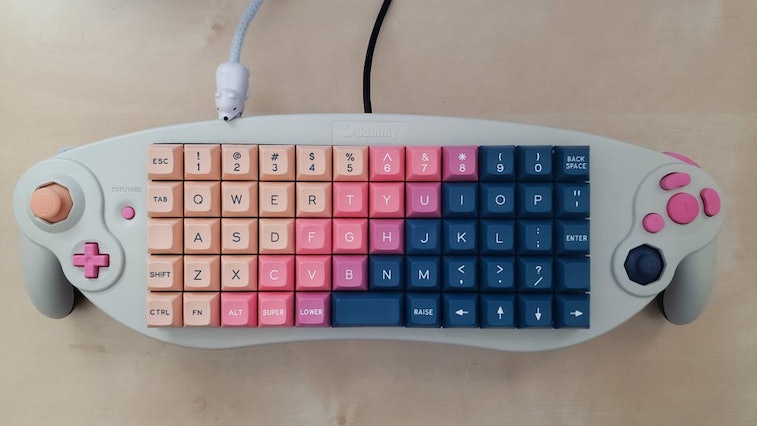 Reddit user HolyChipmunk modded their GameCube keyboard into what can be accurately described as a dreamy, pastel beauty. We'll let you decide if you think it's practical because that’s a completely different debate. Oh, and it clicks and clacks loud enough for everyone in the room to hear.

On Reddit, HolyChipmunk wrote, "Y'all thought the GameCube keyboard was a joke." The creator's modded controller was first reported by PCGamesN and seems to be inspired by another creator's attempt. When it comes to the basics, HolyChipmunk's GameCube beauty has an 18-year-old Nintendo plastic casing and comes mounted with an aluminum tray.

The main colors for this delightful controller are light beige with a hint of yellow, shades of pink and purple, and then deeper hues of teal, which come from the Vilebloom theme. The keyboard will let you type and, as is evident with the creator here, play games like Super Smash Bros. Melee. Here is HolyChipmunk demonstrating the modded controller.

Try, try, and try again — As PCGamesN reports, Nintendo released its GameCube keyboard in 2002, slapping a whole ASCII keyboard in the middle of the controller. It was clunky, too big, and became a hurdle for smooth playing.

HolyChipmunk's edition is more compact and, of course, a lot cuter. Not only does the creator add Vilebloom keys in, but he also replaced the older controller buttons with appropriate Vilebloom equivalents. So, everything looks new.

In total, HolyChipmunk spent more than 12 hours building this particular modded keyboard-controller. And while it is tempting to introduce some glam to your controller, we think you should first consider the price of doing so. A Vilebloom-themed keyset will run about $160 alone. If you're an extremely online gamer who loves novelty and experimenting with different modifications, this is your project for the weekend. But if you play occasionally, we think you should stick to more economical and budget-friendly controllers.