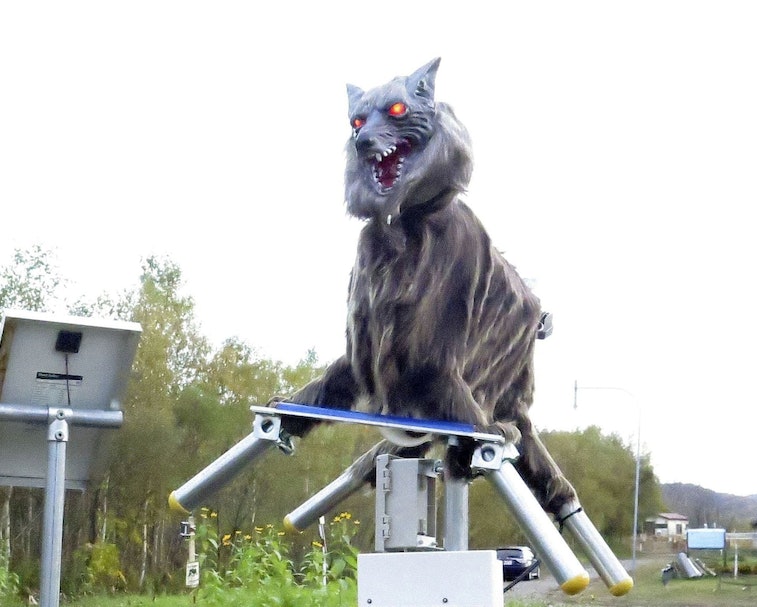 The Japanese town of Takikawa has a unique problem. The town, which is situated on the northern island of Hokkaido, has recently witnessed a spike in bear appearances. Some of these unexpected visits have led to injuries, and in two cases, deaths. It's been a dangerous problem for locals who, according to The Guardian, believe bears have been venturing into the more populated area of the town due to the lack of nuts and acorns in the woods.

To tell these unwelcome guests to go back to their own turf, locals have deployed two "monster wolf robots" by open fields. These robots make 60 sounds (including howling and machine sounds), come with motion detectors that activate upon picking up presence nearby, and are coated with thick brown fur and red beady eyes. For extra fun points, they have fangs, too. 2020, you've really got to reel it in.

The Monster Wolf robot is the brainchild of Ohta Seiki. According to The Guardian, Seiki has sold about 70 of these beasts since 2018, which have proven to be especially helpful in rural areas in Japan where bear appearances are much more frequent. It's a shame that real wolves can't do the job but that's because Japanese wolves are normally located in the central and northern islands. Here's what our hero looks like. And sounds like.

Monster Wolf to the rescue (again) — Monster Wolf is no stranger to scaring off unwanted guests. These robots were deployed near farms around Kisarazu City in Japan several years ago. People seem to like these bots better than the average scarecrow.

We'd make a little joke about yet another job lost to automation and how we feel sorry for actual monster wolves who would've loved the professional role of freaking bears off into the wilderness but we'll hold off on those. Just take one last look at this thing. It rules. Is it weird that we'll like to ride one and see how long we can hang on?