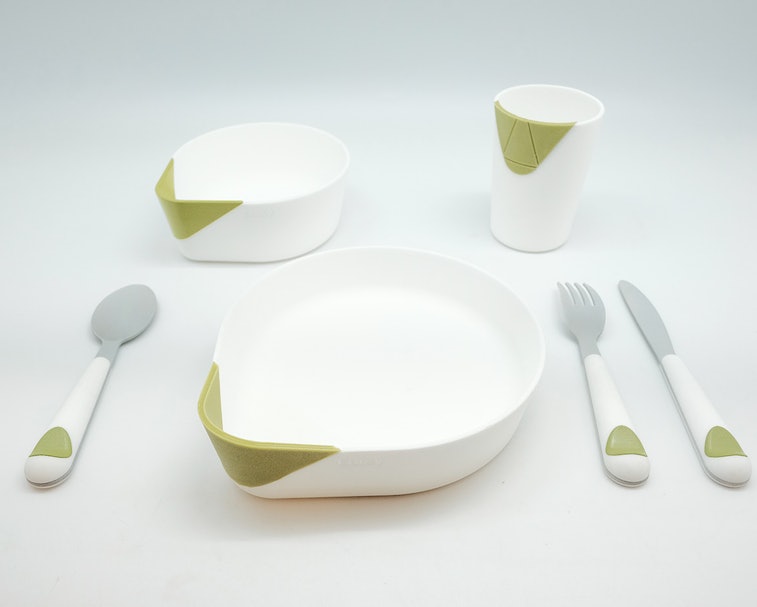 Singapore-based designer Jexter Lim began his latest project with an important but vastly under-researched issue: those with visual impairments often have trouble eating and pouring. It’s a problem the able-bodied are likely to forget, given how second-nature it becomes for us to grab another bite of those roast potatoes.

“Dining is something that we usually take for granted,” Lim writes on his website. “However, for the visually impaired, simple tasks like eating and pouring can be extremely challenging.

Lim’s solution is Eatsy, a beautiful tableware set designed specifically for those with vision impairments. The multi-functional set includes a plate, a bowl, a cup, and three utensils. Each piece in the set includes an olive-green spot used as a sensory cue — a place where, by touch alone, you can understand the dish or utensil’s direction and location.

Though the set includes functions custom-tailored to life with visual impairments, it would certainly look at home in any modern kitchen — the features are really customizations that would make eating easier for just about anyone.

Starting with simple criteria — As research for the project, Lin worked with visually impaired people to observe how they carried out the task of eating. He then used those first-hand experiences to draw up a list of problem areas:

He then used those problems to set for himself simple design criteria. He wanted to design things that were universal, hygienic, and user-friendly.

Better pouring — Pouring a glass of water is difficult enough when you can see what you’re doing — it’s much, much more difficult to do so when you’re visually impaired, and really hard to do without at least some spillage.

That’s why the Eatsy cup includes a food-safe silicone flap that indents inward to secure the spout for pouring by feel.

Better eating — The Eatsy plate and bowls include a similar green flap, but this one is curved and sloped specifically to make it easier to scoop things up. The corners also serve as an orientation spot.

To help with cutlery slipping, each piece has a small notch on the handle that can latch onto the sides of plates and bowls.

And it's stackable! — Lim really thought of everything here — Eatsy is even easy to store.

Lim’s Eatsy is probably the most user-friendly dishware you’ll ever see. It's a refreshing reminder that the tools we so often take for granted can be made more accessible — and without sacrificing aesthetics, at that.