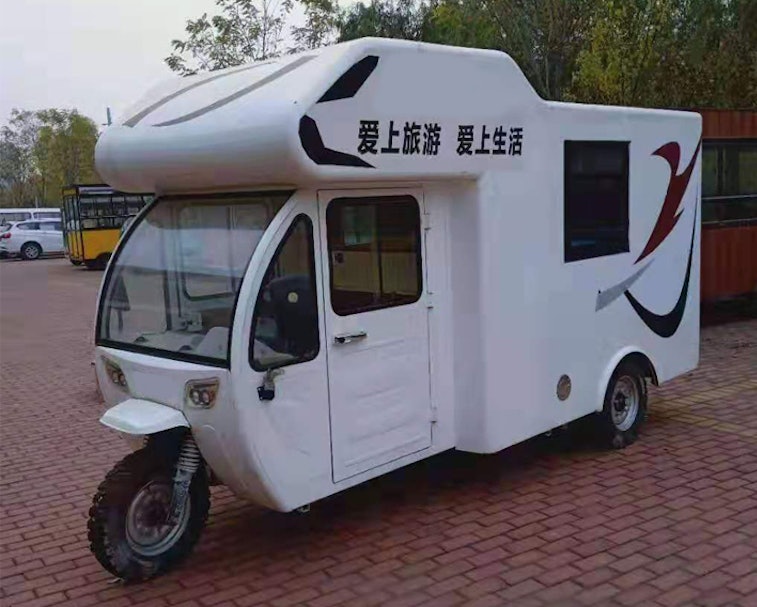 A lot of weird products can be bought on Chinese marketplace Alibaba, especially ones that don't exactly appear to have any type of certification for safety. But where they might lack in the quality assurance department, they make up for in rock bottom prices. Case in point, Electrek found a battery-powered RV on Alibaba with an asking price of just $4,800 (though a new listing suggests the price has since been bumped up to $6,200).

Tiny RV — A couple of caveats are warranted. This vehicle is small, with just two seats up front and three wheels, not four — it's not so much an RV as an electric tuk-tuk with some truck space attached at the rear. Its product page even describes the RV as a "tricycle motorhome." So you're not going to have a lot of space for the family. A kitchen table in the rear comes down and can accommodate four people, but when it's converted into a bed it only fits two.

If you're just going solo, however, the RV honestly doesn't look half bad. A tour of inside shows a decent enough living space with ample storage, electrical outlets, and even wood flooring. The rear of the RV has extra storage space accessible from the outside.

With a 120 Ah, 7.2k Wh lead acid battery, Electrek estimates the vehicle might be able to get a range of around 72-96 miles on a charge. And it only has a top speed of 25mph, so you won't be hitting the freeway in this thing.

But it could still be a fun way to go on solo camping trips. Just be prepared to drop anchor outside, as the RV doesn't have a toilet.

Live for the thrill — Safety is the probably biggest concern with this vehicle. With just a single wheel up front, it seems like the RV is destined for a rollover. Or if you slam the breaks, all the weight loaded towards the rear will be hard to stop, and the front wheel might not be able to keep traction. Wind could even potentially tip the thing over depending on how heavy the battery is. So you'll have to exercise caution and the RV's low top speed may even be too fast.

These types of oddly shaped vehicles are common in China, where current regulations don't cover any vehicles with a top speed below 62mph. The affordable pseudo-cars often replace electric bicycles and other sorts of low-speed electric vehicles that are already popular in the country.

While the electric RV surely isn't street legal in America, buyers here would probably be turned off by the extra shipping cost of $2,500 anyway. Still, it's fun to dream.