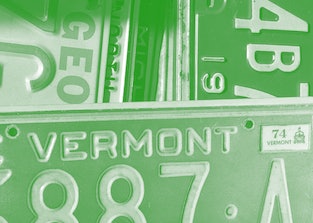 We love a deftly deployed emoji as much as the next digital denizen. We’re delighted we can engrave them on AirPods cases, we’re slightly less ecstatic we can use them to react to Twitter DMs, and we’re downright baffled by a new bill introduced in the state of Vermont which Business Insider reports proposes letting vehicle owners in the state add emoji to their vanity plates.

License plates are meant to help make cars uniquely identifiable, especially for law enforcement. We’re not convinced they’re an appropriate place for whimsy, particularly if it could result in ambiguity or confusion. Though the prospect of hearing “Four, Two, Zero, Face with Tears of Joy” on a cop show is hard not to grin at.

Sadly, that probably won’t happen, though, because Vermont’s rules for vanity plates prohibit the use of more than two numbers for the maximum of seven characters. Vehicle owners can, however, use a single character, as long as it’s not an “I”, “J”, “O” or “Z”. That could mean the well-heeled could start a bidding war over single emoji license plates.

Only six options — The bill would allow for one of six emojis on license plates “in addition to the distinctive number assigned by the Commissioner of Motor Vehicles or the numerals and letters selected by the registered owner of a vehicle as a vanity plate.”

So probably no dragons, unicorns or poop — Which means you’re probably not going to be able to get away with peaches, eggplants, water splashes, or other suggestive emojis, and you definitely won’t be able to use more than one to peddle pictorial smut to pedestrians and passersby. Sorry.

Is this bill a great use of lawmakers time and energy? Not in the slightest. Is it humorous and destined to crop up in quiz show questions for years to come? No doubt about it.