Xor is bringing sexy back to dumb phones 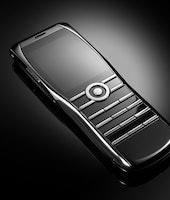 The cost of one Xor Titanium phone.

Xor is offering a luxurious dumb phone in 2021 for anyone who misses old-school Nokias, Engadget reports. The Xor Titanium is encased in its namesake metal — hence the £3,000 (roughly $3,980) price tag. Otherwise, the retro phone can make calls, send texts, measure the air’s quality, and offer five whole days of battery life. If you really miss phones from roughly two decades ago that could be thrown down a flight of stairs and survive, and have thousands of dollars to similarly throw away, this is for you.

A luxury car for phone calls — The Xor Titanium takes the beloved candy-bar form factor of old Nokia phones and transforms it into a sleek, curvy device you might expect to see speeding through Beverly Hills if you didn’t understand photographic scale. That Nokia influence comes from Xor’s co-founder Hutch Hutchison’s tenure as the head of design at Vertu, the Snake purveyor’s axed luxury line.

The Xor Titanium isn’t a completely dumb phone and honestly, would bode well for a spy or secretive billionaires concerned about the upcoming class war. The phone uses 2G/3G networks for phone calls which benefit from active noise cancellation. The phone will also use a different ringtone to indicate whether a call is encrypted or not.

Two Xor users can call and text with end-to-end encryption, and they can also remotely delete data on their own devices. Should a user somehow dwindle down the five days of battery life on its light, Linux-based operating system, Titanium supports wireless charging.

Not your typical dumb phone — The Titanium sits somewhere between high-end concept pieces like the folding screen smartphone craze and the quiet, affordable side market for tech-detox phones. The closest we’ve gotten to something similar is Motorola’s embarrassing Razr rehash, but that was still trying to compete with smartphones.

Hutchinson told Engadget that the Titanium isn’t for anyone concerned about the price or hunting for a modern gimmick. Xor is targeting Vertu’s old stomping grounds of Asia and the Middle East, hoping to be a second phone for business people still reliant on calls. The phone will likely appeal to the luxury car- and watch-lovers more than someone looking for a time machine or less screen time.

On its face, it seems like an egregious purchase, but the Titanium will likely deliver on all of its promises and look good doing it. Well, most of its promises — the phone was expected to launch this year, but due to coronavirus-fueled supply chain issues (and likely reading the financial room), will launch in early 2021.