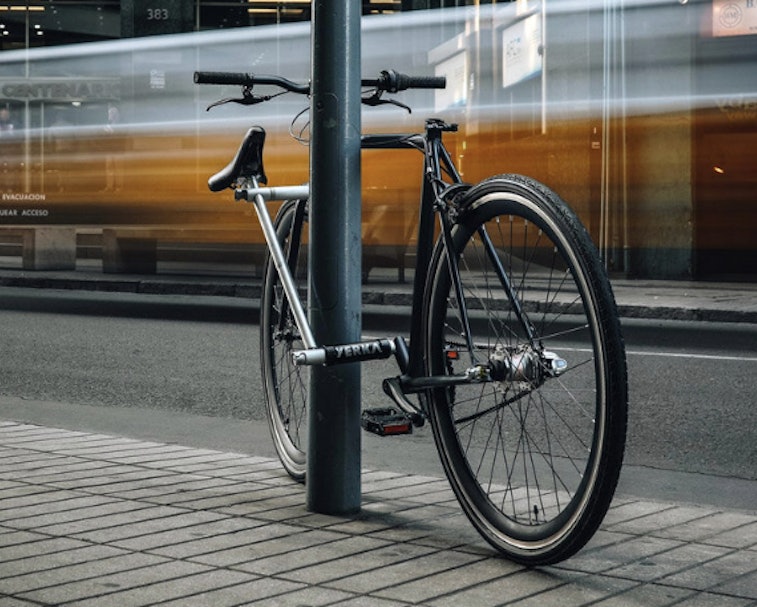 There are few feelings worse than the painful realization that your bike just got stolen. Yerka Bikes hopes to solve that problem with the V3 — a bicycle that the company bills as entirely “theft-proof.”

To arrive at its theft-proof claim the V3 employs a unique locking mechanism that incorporates parts of the bike’s frame. To secure the V3 to a post or other sturdy object, a rider can articulate joints on the bike’s frame and link them with together using its seatpost — a move that forms a bar around your chosen anchor.

That means, under the V3’s clever design, if a thief truly wanted to ruin someone’s day, they would have to break parts of the bike itself. And even if a thief managed to compromise the post or pole the bike is anchored to, locks integrated into the bike prevent the cranks from moving.

Oh, and for an extra safety measure, the V3 wheels also uses nuts that are bolted in a unique pattern and can only be disassembled with an included special adapter. Yerka Bikes says its locking setup allows its frame to be secured to poles, fences, bike racks, trees, and any other object up to 20 centimeters wide.

Outside of its novel lock, the V3 weighs about 28 lbs. and can withstand up to 330 lbs. of weight from the rider and their cargo, including a child seat, fender, or grill. Offered in four colors including turquoise, black, white, and gold, the frame uses aluminum and Chromoly steel that won’t bend or break.

The gold option uses a protective anodizing method that maintains the bike’s lifespan without constant trips to the repair shop. All of the models have a glow-in-the-dark, reflective stripe element so it’s even safe for nighttime use.

Since bikes are stolen every four seconds in Europe, according to the company’s website, the intricate design of the Yerka V3 prevents bicycle thieves from wasting their time. While it may sound complicated, it actually only takes 15 seconds to lock and unlock the bike.

The Yerka V3 is offered in single and three-speed options and is available in sizes small through large. Though the brand is working on 100 percent sustainable products, this one is 95 percent recyclable. It’s available for $699 and $799 depending on the speed, which is a hefty investment. But for a bike that’ll never be stolen, at least you’ll never have to pay for a new one.