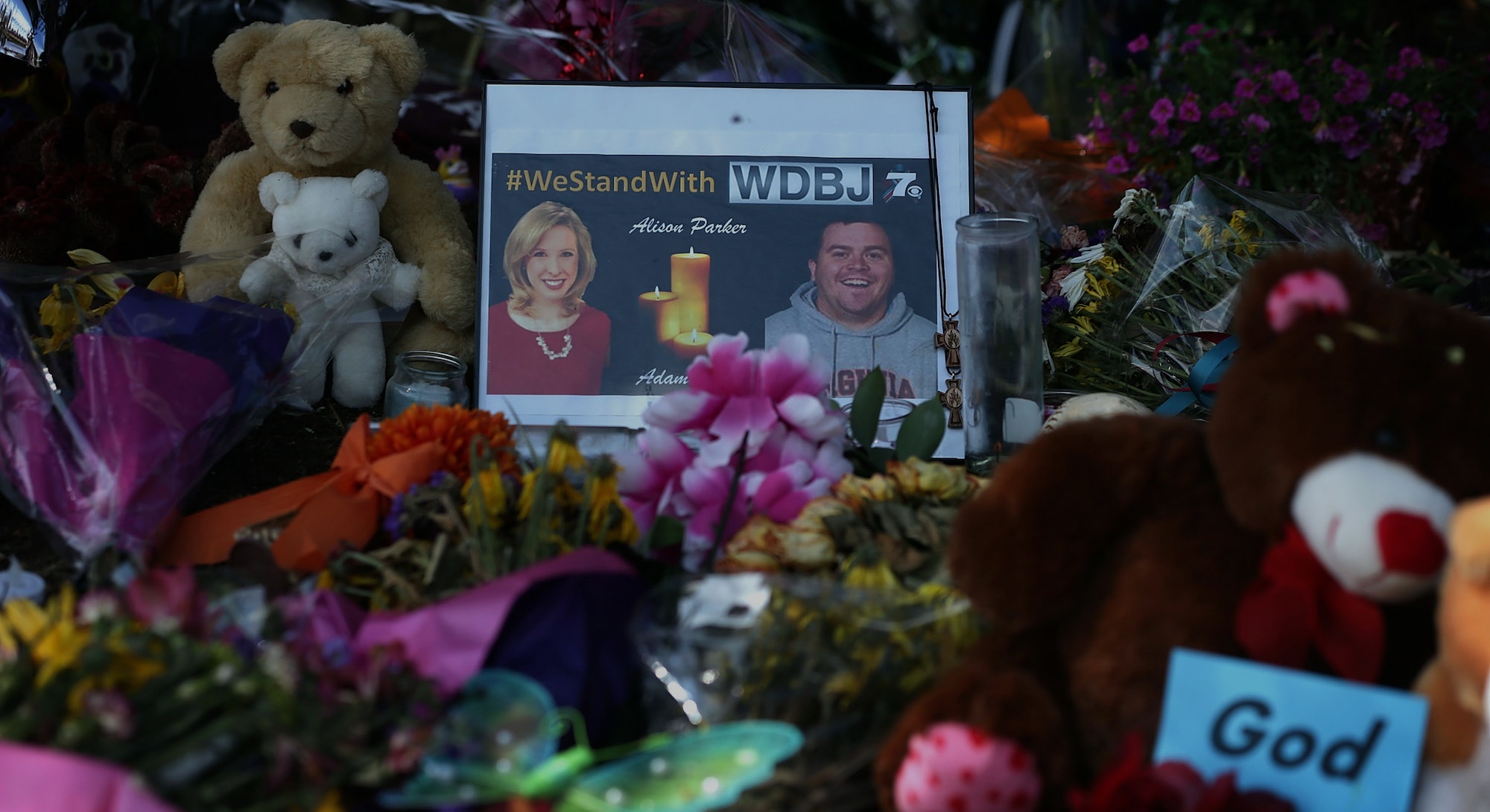 Andy Parker says he’s tired of asking nicely for YouTube to remove videos of the last moments of his daughter’s life.

In August 2015, 24-year-old Alison Parker was conducting a live television interview in southern Virginia when she and her cameraman, Adam Ward, were fatally shot by a former colleague. To this day, video of Alison’s murder, including GoPro footage recorded and posted by the killer, is easily findable on YouTube. So last Thursday, Andy filed a complaint with the Federal Trade Commission against YouTube and its owner, Google.

The complaint, drafted by the Civil Rights Clinic of the Georgetown University Law Center, claims that YouTube violates its own terms of service “by hosting videos that graphically depict people being murdered, capitalizing on their final moments for pure shock value and entertainment.” The burden to find and report these videos falls upon users, which the filing calls “deceptively burdensome.”

Input recently spoke with Andy, who's now an author and gun-control activist, about what he hopes to achieve with the FTC complaint and how the last four and half years have shaped his view of human nature. “I saw early on there’s a lot of evil and there’s a lot of batshit crazy people out there,” he says.

Your daughter Alison was murdered four and a half years ago, and videos of her killing have been up on YouTube since then. Why are you filing this FTC complaint now?

Because we've tried to be nice. We've tried everything. When I say we, I mean me and the Georgetown University Civil Rights Clinic. Even four and a half years ago, [YouTube’s] terms of service claimed that they don't show graphic content. Well, they do. So we tried to point it out to them, we tried to ask that they adhere to the terms of service, and they just ignore it. It’s been building to this point, where the only recourse that we have is to file this complaint, because they have immunity with Section 230.

I never heard of it either until I started getting into the weeds with it. It comes from the Communications Decency Act, which was passed back in the mid-’90s. It was crafted to encouraged free speech online — the free exchange of ideas and thoughts. And in the mid-’90s, everybody thought, “Well, this is great.” Of course, the problem is no one in the mid-’90s anticipated Google, YouTube, Facebook, and Twitter, and the cesspool that social media has become. In the same way that when the framers of the Constitution put in the Second Amendment, they were all using muskets and didn't envision assault weapons in the hands of people that should not have them.

The end goal for me, by taking this action with the FTC, is to shine an additional light on Google and social media’s bad behavior, to help accelerate the process of creating legislation to either amend or revoked this Section 230.

Are you also hoping that Google will in some way be punished?

I want to punish them. The FTC has fined Google before. Sadly, even if they fine them half a billion dollars, that's — as we all know — just chump change to Google. And they'll just pay it and keep doing what they're doing. That's one thing that we've learned through this process. They keep ignoring their terms of service because they can. Because they profit from these videos.

Do you think it all just comes down to their bottom line?

Part of it’s the bottom line. I think the other part of it is that if they actually do something it would create a precedent, and they don’t want this to be a precedent-setting deal. So that other people don’t come in and say, “Hey…” — which other people should because I'm not doing this not just for me, but for other people that have been victimized. The Sandy Hook families, the Parkland families — the list goes on and on, and they’re mentioned in the complaint.

The irony of it is that the two guys that founded Google, their motto was “Don't be evil.” And the reality is, as long as the videos of Alison’s murder stay up, they perpetrate evil every single day.

After you filed the FTC complaint, Google issued a statement saying, in part, “We rigorously enforce these policies using a combination of machine learning technology and human review and over the last few years, we’ve removed thousands of copies of this video for violating our policies. We will continue to stay vigilant and improve our policy enforcement.” What was your reaction to that?

It's the same shit that I've been hearing for the last four years. It's a regurgitation of “These are our terms…” You know: “We try really hard.” And it is literally the same excuse. It’s not even an excuse. It's just, like I say, regurgitating their terms of service: “This is what we do.”

I teamed up with Lenny Pozner early on, and he was helpful with getting some of these videos of Alison removed. But not thousands of videos of Alison. He probably got hundreds removed, but there's still plenty out there. They’re still up there. Some that have been up there since 2015. And frankly, one is too many.

You mentioned Lenny Pozner, who lost his son Noah at Sandy Hook. He now runs the HONR Network, which seeks to remove these videos on behalf of families like yours. Before reading your complaint, I had no idea how hard it is to get a murder video taken down from YouTube. It sounds like a nightmare.

It is. And I've said this many times: I've never watched [video of Alison’s murder]; I don't want to watch it. I just know that it's out there, and I know that Google's profiting. Lenny and his group essentially play whack-a-mole. They're going after the people that post the stuff, and there's a place for that. But I want to go after the enabler. He’s going after the street pusher; I’m going after the cartel.

How does your view on human nature differ from what it was five years ago?

There is a lot of evil out there. I started seeing it within a day or two of Alison’s murder. I had a YouTube channel where I archived Alison’s dance recitals and other videos. And in my past life, I was a professional actor and I had a bunch of old commercials that I did sitting on videotape. And rather than just have them rot, I uploaded them to this YouTube channel.

And boy, as soon as Alison was killed, people were commenting on her dance recital, just the most vile, ugly comments, like, “You know, I watched you die, and I really enjoyed it.” It was just hundreds of these heinous comments, and that's when it really struck me. I was dumbfounded about how evil some people can be. I mean, just downright evil.

That's where I got my first taste of the reprobates and the people living in their grandmother's basement out there.

Lenny Pozner’s family has had to go into hiding. Have you taken any extreme measures like that?

No. They leave me alone. And I think it’s because I'm not afraid to show my face and be out front with it. I think some of these people are afraid of me, to be honest with you. Lenny engages with these people online. And I think that's part of the reason why he gets attacked. They’re like flypaper, where they want you to engage, and as soon as you do, you're stuck to them. They want you to engage so that they can keep messing with you.

The other piece of it is that he’s having to deal with the conspiracy theorists. And when they descended on my YouTube page, they took some of the old commercials I did, and they made mashups with Alison’s murder video. I never watched it, but I could see the title in the video. They said, “This guy's a crisis actor. The whole thing is made up, everything is faked.”

The point of it was, at least in in some of these people's minds, that I was a crisis actor hired by the government to help take away people's guns. They put two and two together and came up with six.

Sometimes we engaged. Like they said, “How does how does Alison like living in Israel with a fake identity?” And my wife said, “Well, how do you like living in your grandmother's basement?” You just you throw that out there and then you block them and move on.

“I chose to live. I chose to honor Alison through action.”

We did that early on because it was infuriating to see that and you just wanted to exact some kind of retribution, as small as it can be. But then you realize it's just not worth it. We just don't go there.

I’ve spoken to some people who've had a family member murdered, and they’ve said that there’s really no such thing as closure.

The day Alison died, I thought that my life was over. I knew I could go on existing, but I was in shock and just completely lost and consumed with soul-crushing grief and anger. But you do go on living.

That day, we saw the assistant general manager for the station. I don't remember much of our conversation, but one thing he did say was, “Andy, you understand Alison would want you to live,” and later it reminded me of a line in The Shawshank Redemption, which was my favorite movie. You remember Andy Dufresne is trying to keep from losing his mind in prison and his friend Red tells him to “get busy living or get busy dying”?

I chose to live. I chose to honor Alison through action. And I think ultimately we're going to prevail with YouTube and Google because there's a lot of language and a lot of thought percolating on Capitol Hill on legislation to curb this kind of stuff. So I keep soldiering on.

This interview has been edited and condensed.