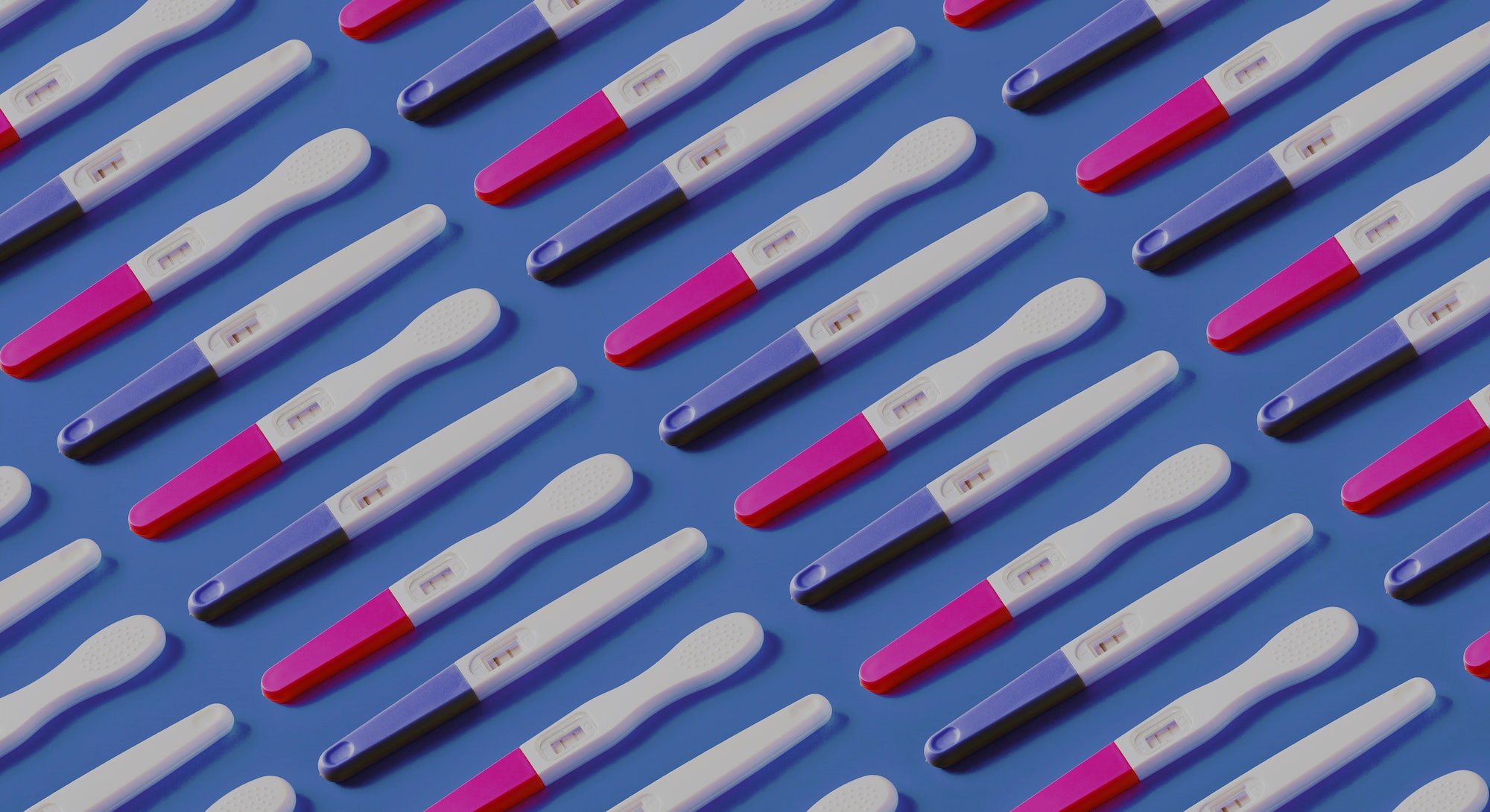 The clock reads midnight, and I’m wide awake in bed, my phone inches from my face, the blue light illuminating my eyes in the dark.

For the past hour or so I’ve been scrolling through the public community boards on BabyCenter, a resource for hopeful and expectant parents that’s “committed to providing the most helpful and trustworthy pregnancy and parenting information in the world.”

Much of the information on BabyCenter is practical stuff for first-time parents: There are lists of pregnancy symptoms, a birth-plan worksheet, a registry checklist. But the community side of BabyCenter — where people who can get pregnant, the majority of whom identify as women, gather to exchange stories, advice, and insight — is where I found myself in late November 2020, after I miscarried my first pregnancy.

The first days after I got a positive pregnancy test were a whirlwind of shock and excitement. I tested early; as advertised on the pink pregnancy-test box, results are reliable from five days before your expected period. On Thanksgiving Day, I passed on offers of wine, but I was well aware that the first stage of pregnancy is precarious; around one in four pregnancies end in miscarriage, 85 percent of those in the first trimester. I hoped that knowing those numbers would prepare me for potential disappointment. But when, on the day of my expected period, I used the bathroom before bed and found myself staring at tendrils of blood in the toilet bowl, I was overcome by grief.

On BabyCenter, I found the only people who could truly understand my pain.

The bleeding was only slightly heavier than a regular period, so I resisted an emergency room visit. Instead, I gritted my teeth and called the midwife we had settled on if I ever had a viable pregnancy. A two-minute description of my symptoms confirmed that I had indeed miscarried. During the day, I ping-ponged around the internet, searching for a possible explanation. At night I stared at the ceiling, whispering “Why?” into the darkness.

I was in a mental fog when I discovered the BabyCenter community boards. There, I found the only people who could truly understand my pain — but I only ever lurked, too embarrassed to post any of my own questions. Instead, I pounced on posts with titles like “Did I have a chemical pregnancy (5 weeks)?” A chemical pregnancy is the phenomenon in which elevated hormones associated with pregnancy are picked up by a test but cannot be verified with an ultrasound or fetal heartbeat. This is, as it turned out, what happened to me.

I quickly learned the message board lingo, too: TTC is trying to conceive, O is ovulation, DPO is days past ovulation, and POAS is pee on a stick. DD and DS mean dear son and daughter, respectively, and are used to address future (and current) offspring. BFP — big fat positive — is the holy grail of BabyCenter. The message boards are filled with desperate pleas like, “Please - is this a bfp??... Just don’t know if I’m just wishing for a line.”

On BabyCenter, women like me who didn’t feel the need to move on, get over, or forget about their pregnancy losses find a refuge. I continued wasting money on stacks of pregnancy tests that would end up in the trash — only to be fished out 30 minutes later for just one more look at that line — but at least I no longer felt isolated.

The volatile mixture of emotions I felt was immediately validated on BabyCenter.

BabyCenter confirmed that there were other women like me who were similarly preoccupied, though their usernames made them relatively anonymous. I wouldn’t have survived the weeks after my miscarriage without the community boards, where I learned that it is typical to obsess and overthink after a pregnancy loss, not embarrassing or shameful. The volatile mixture of emotions I felt — anger that this had happened, shame that I couldn’t move past it — was immediately validated on BabyCenter.

“When a woman loses a baby, the best way for her to deal with it is to talk to other women who have gone through the same thing,” explains Dr. Yaakov Abdelhak, maternal fetal medicine specialist at Integrative Obstetrics in Jersey City, New Jersey. “When you realize that other people have gone down the same route — that you’re not insane and you almost can’t think about anything else — you start realizing, ‘Oh, yeah, I’m normal.’”

Abdelhak adds that for women who aren’t part of a strong, close-knit community, internet sites like BabyCenter fill that gap. But the downside is “if you go looking for information to support what you believe, you will absolutely find it,” he says, “And then it will reinforce your belief, and you will go down that road even more confidently, even if it is a bad road.”

When I got pregnant again in December — a BFP! — I fell into the same patterns that I adopted after the miscarriage, searching BabyCenter for answers instead of calling my midwife. Yet the more time I spent there, the more I started to wonder how much public message boards benefit women. Just how accurate was the information I was getting there?

“Employee and volunteer moderators [monitor] the BabyCenter Community continually,” Dina Freeman, director of social and community at BabyCenter, tells Input in an email. “Also, each post and comment in the Community has a flag option so members can report any concerning content to volunteer Group Owners and/or Community Staff.” However the BabyCenter Community Guidelines state, “Because our community is so large, BabyCenter doesn’t monitor or verify information posted by our users,” leaving the door open for potentially harmful content.

The noise from all those competing opinions created a monstrous, frightening level of anxiety in me.

Early on in the first trimester, if I had a day where I didn’t feel sick or exhausted, I would search BabyCenter for posts about “disappearing symptoms,” reasoning that hearing stories from other women who were pregnant after miscarriage would provide reassurance. But panicked comments like “My symptoms havent disappeared but I’m spotting so having had 2 miscarriages preeviously [sic] I am already preparing for the worst” sent me into a tailspin of distress.

I hadn’t worried about my levels of HCG, a hormone produced during pregnancy, or my fetus’s heart rate until I read long threads in which users compared their stats. The noise from all those competing opinions created a monstrous, frightening level of anxiety in me.

While my friends gushed about the miraculous process happening to my body, I would plaster a smile on my face, thinking all the while that pregnancy just felt like an opportunity for massive heartbreak. I was exhausted by this mindset, but couldn’t break free of it because I spent so much time on BabyCenter feeding my anxiety and comparing myself to strangers.

One evening, my mom texted me to ask how often I read to the baby. I realized with a start that I didn’t even talk to them. I had been so focused on reading up how other women with an anterior placenta count kicks and if it’s normal to only feel the baby move at night that I had been avoiding bonding with my baby. It was as though I was irrationally preparing myself for this pregnancy to end in grief, too.

According to my midwife, I had a healthy, low-risk pregnancy that left the door open to connect with my baby and reflect on my transition to motherhood. But if I went solely by what I read on BabyCenter, it was also a chance to constantly second-guess my intuition and the reassurance of my care provider, to focus on the worst possible outcome rather than considering the possibility that everything could be just fine. That’s not how I wanted to start my life as a mother, initiating a relationship with my child based on fear. As I entered my third trimester, I resolved to quit the BabyCenter boards.

I haven’t always been successful. Once, I ate tiramisu and felt compelled to check in with the BabyCenter community to see I had just poisoned myself and my kid. I encountered the same thing I always did on the platform: No definitive answer, just a few very adamant people debating whether or not it’s safe to consume mascarpone cheese or coffee liqueur.

BabyCenter introduced me to a community where being an obsessive, grief-stricken, paranoid, anxious mess of a would-be mother was actually perfectly acceptable — normal even. For me, at least, this way of life became untenable. My path back to being the woman I was before my miscarriage can’t include BabyCenter.

Now, without the constant presence of BabyCenter in my life, I don’t fixate on every possible negative outcome.

Sometimes I still can’t believe that in September I’ll be holding my baby. My anxiety is a flame that never goes out, so I still wonder if something could go wrong. But without the constant presence of BabyCenter in my life, I don’t fixate on every possible negative outcome. I talk more to my baby throughout the day and night, and I dream about the day we will meet. Even writing this essay is a declaration of sorts that everything will indeed be okay.

BabyCenter has saved the sanity of many women; for a time, it saved mine, too. I’m still learning about what type of mother I want to be, but what I do know for sure is that the internet can’t parent my child. Only my instincts and intuition can do that. I’m better off without BabyCenter.