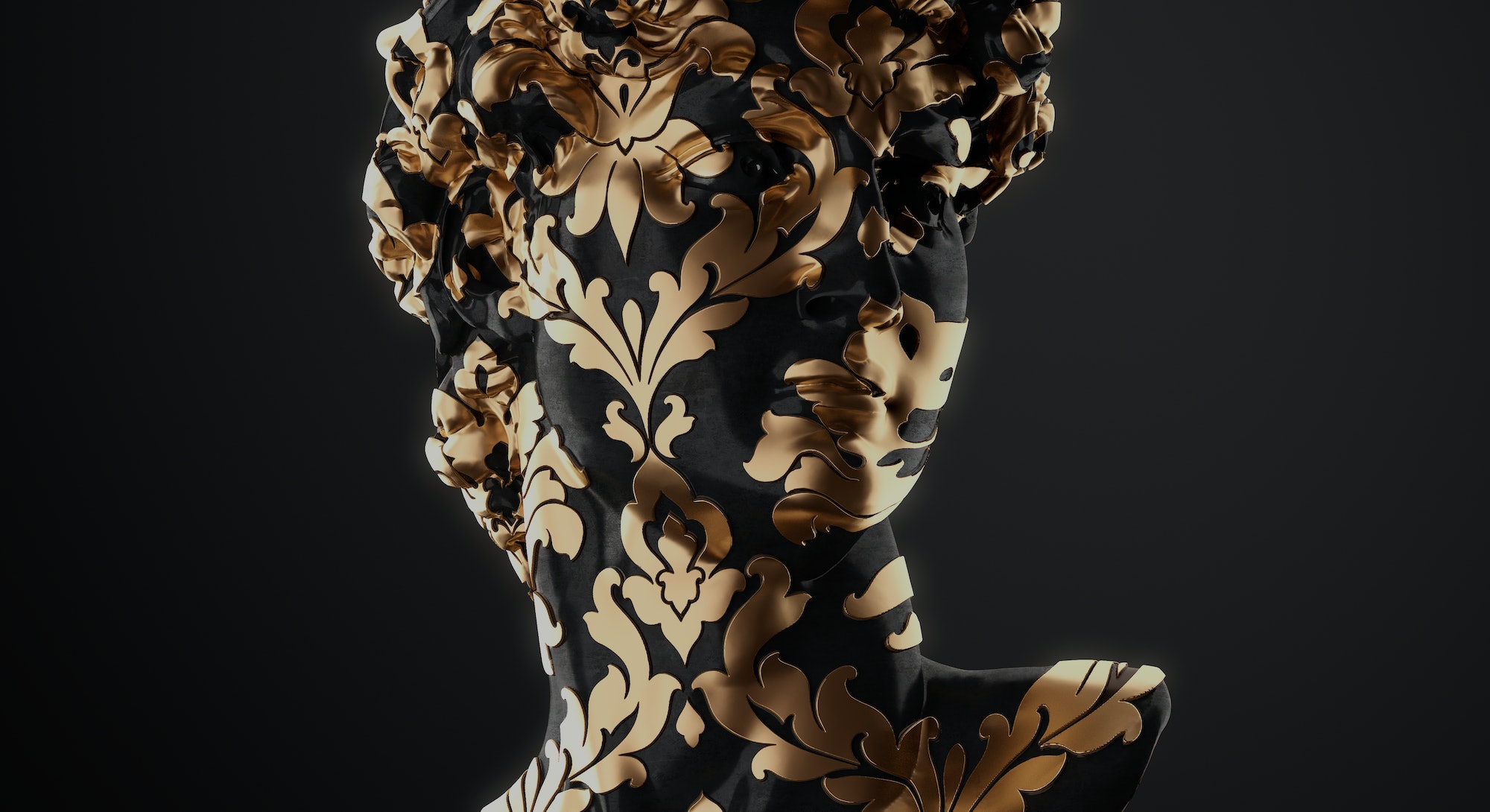 Someone buys Kidmograph’s "Meditation Area," a Dali-esque desert scene hosting floating water blobs and planets, for $299. Six minutes later, a mesmerizing crystal animation ("REPRESSED//" by Fvckrender) goes for sale at $236, followed by an "Aqua Pink Gucci Ghost" by Trevor Andrew for $699. Artworks from EDM label Space Yacht and by painter Kenny Scharf are also for sale on Nifty Gateway, for up to $2,105 and $250,000, respectively.

Launched in March 2020 by identical twins Duncan and Griffin Cock Foster (having been purchased by another set of identical twins, Cameron and Tyler Winklevoss of Facebook then bitcoin fame, months prior), Nifty Gateway is a digital art marketplace where collectors can buy, sell, and bid on unique works. Each piece is certified unique thanks to blockchain technology, specifically using something called a "non-fungible token," or NFT, or “nifty” that marks each edition as one-of-a-kind — just as a certificate of authenticity would in the traditional art world.

Rise of the “nifties”

NFTs are tokens built on the Ethereum blockchain network, but what makes Nifty Gateway unique in the crypto art space is that users don’t have to own or deal with cryptocurrency to make purchases on the platform. A regular credit card is all it takes for buyers to dip their toes into what — up until recently — had been an extremely niche artistic community.

“We’re making it as easy as possible for people to use this technology,” says Griffin.

“People in the crypto space tend to underestimate how complex it can be for outsiders,” Duncan adds. “We’re all about mainstreaming NFTs. That’s informed every decision we’ve made.”

The twins, 26, are video chatting from their separate downtown Manhattan apartments, having recently moved out of the loft they shared in SoHo. Duncan, who unlike his brother wears glasses, maneuvers around exposed pipes to show off the screen where he’s displaying one of his “nifties,” a "Gucci Ghost Yellow and Aqua" by Trevor Andrew (below), set between paintings and framed physical artwork. Duncan can change which nifty appears on the screen, so his gallery is regularly in flux.

“NFT collecting is crazy addicting,” he says. (He currently has 144.) It’s made more addicting by the “drop” model Nifty Gateway uses to release new works. Fashioned after the release of limited-edition sneakers, for which enthusiasts wait in security-guarded lines snaking around Soho blocks for hours, Nifty Gateway’s drops “add time pressure and make auctions / sales more of an event,” says Jason Bailey, creator of the art tech blog Artnome. “[Nifty Gateway] really pioneered this idea of ‘drops’ … of digital artworks.”

The model aligns with the platform’s demographic: Younger art collectors who are digitally native and have millennial / Gen-Z hobbies, like collecting sneakers and listening to EDM.

The industry is now worth about $100 million.

“We’re definitely geared to go after the artists we know,” says Duncan — like Matt Gondek, one of the first artists the Cock Fosters asked to join the platform and a favorite of Duncan’s since high school. The twins put a lot of effort into pitching the concept to Gondek, whose art often features Disney characters, by pointing out how NFTs are just another medium, like painting or sculpture. Gondek’s Cyberbully Collection is currently for sale on Nifty Gateway, with pieces going for between $360 and $4,999 each.

As the company’s grown, Duncan and Griffin do less of the artist sourcing. They recently hired a team member who’s worked with “a number of prominent galleries,” and aim to recruit more employees with fine art backgrounds. Their team now totals 13, about half in software engineering while the others work with artists.

The Cock Fosters, who grew up in Seattle, entered the NFT space at the right time. The NFT market is booming, and only a handful of other NFT art-buying platforms exist, most of which require buyers to have cryptocurrency wallets. Over the summer, according to blockchain industry publication Decrypt, NFT trading volume increased by 57 percent. The industry is now worth about $100 million. Meanwhile, crypto hype is nearly reaching 2017 levels, with the price of one bitcoin hovering just below $20,000, close to its all-time high. And during the Covid-19 pandemic, physical art auctions are a no-go, making virtual bidding wars a viable substitute.

It’s the perfect storm for Nifty Gateway — which had $1 million in sales volume in November, a figure that’s been increasing by about 50 percent month-over-month since launch — to continue its forward momentum. But the Cock Fosters remain ambitious. “We will not rest until one billion people are collecting nifties,” reads the slogan on their website, which they repeat on our call.

A brief history of NFT art

The first “cryptocollectibles,” Rare Pepes, came on the scene in 2016, followed by CryptoPunks — NFTs corresponding to pixelated illustrations of punks, aliens, and apes.

Neither was meant to go mainstream, but CryptoPunks inspired CryptoKitties, big-eyed, cartoon cats that got famous for “overwhelming” the Ethereum network in 2017 and selling for six figures. They were written up in The New York Times and Bloomberg. In January 2018, representatives from the Metropolitan Museum of Art, Museum of Modern Art, and Sotheby’s Institute of Art attended a crypto art auction in Manhattan. They sat next to crypto art insiders, a relatively small and eclectic group of hat-wearing software bros and artists with anarchist leanings defacing $1 bills.

This October, the first NFT ever sold at a major auction house, Block 21 by the Robert Alice project, went for $131,250 at Christie’s.

It was during the CryptoPunks and CryptoKitties era that Duncan, an Emory University graduate, got interested in NFTs. In 2017, while working as a software engineer at professional services company Accenture, “I decided that I had to do whatever it took to get into the NFT space,” he says. Having gotten rejected from the few NFT companies he applied to, he figured he’d start his own. One of the major pain points for NFTs was inaccessibility to those outside the crypto world, so that would be his company’s focus.

It took some persuasion to get Griffin on board. After graduating from Washington University in St. Louis, he’d worked briefly in Jet’s sports fan shop and had founded an e-commerce startup in New York City when Duncan approached him about Nifty Gateway.

At first, Griffin says, “I was asking myself, ‘Who would want a digital collectible?’ The concept seemed so weird.” When he saw how much passion and excitement there was within the NFT community, however, he changed his tune. “I think we're very preconditioned to think of digital things as being ephemeral and valueless … that's just not the case anymore.”

Griffin and Duncan moved in together, sharing a queen-size bunk bed in San Francisco, to work on the company in 2018. For those close to them, it was no surprise that the twins had decided to co-found a company. They “thrive” together, their parents tell Input, and were “very in sync” growing up. They shared hobbies, competing with each other in chess tournaments and playing Magic: The Gathering.

In fact, before art, Nifty Gateway served as a portal for people to buy Gods Unchained cards — basically an NFT-backed, digital variant of Magic: The Gathering. Through this, the company got enough attention to earn a spot in Boost, Adam Draper’s startup accelerator.

Meanwhile, the Winklevoss twins had been getting into NFTs, attending the Contemporary and Digital Art Fair in New York City in spring 2019, where I witnessed them inquire about buying a CryptoPunk. Draper introduced them to the Cock Fosters around that time, and in November 2019, the Winklevoss twins purchased Nifty Gateway through their cryptocurrency exchange, Gemini. The Cock Fosters insisted a portion of the sale be in bitcoin, which they plan to hold onto for the long term.

Like Griffin, the Cock Fosters’ family and friends also made the journey from NFT skeptics to digital art enthusiasts. Their lawyer parents, Stacie Foster and Lawrence Cock, though biased towards their children’s work, may serve as one of the best examples of the gap Nifty Gateway bridges between NFTs and non-crypto natives. They’ve purchased nine NFTs through Nifty Gateway, including a Michael Kagan Buzz Aldrin portrait Stacie bought for Lawrence, which they display on a screen in their Seattle home.

“My only complaint is that a lot of times when the drop happens, I can't buy something because it sells out too quickly,” Lawrence says.

Nifty Gateway has gained an increasingly high profile in the blockchain space, in part thanks to publicity from Gemini’s ownership. The Winklevoss twins use the platform to collect — Cameron has 162 nifties, Tyler 138 — and sometimes invite popular “crypto artists,” like Trevor Jones, to join the platform. Jones’ Picasso’s Bull sold for $55,555.55 in July (a Nifty Gateway record until Beeple’s "The Complete MF Collection" broke it and moved the bar substantially higher by selling for $777,777.77).

For Jones, who animates his IRL paintings, the sale “proves that regardless of how much new technology can influence art … there will always be a place for traditional painting.” He sees the crypto and traditional art spaces merging within the next five to six years. Nifty Gateway’s contribution, he guesses, “will be quite substantial… they have the platform, the growing collector base, the quality curated artists, the resources, deep pockets, and now, the experience.”

That merger isn’t the goal for everyone involved in crypto art. “I'd say the majority of early cryptoart folks want to keep it as an alternative to the traditional art world,” says Bailey, where only a few, wealthy collectors support a few, famous artists (or their estates).

“A lot of the spirit of the cryptoart movement is trying to experiment and find a better way to support a larger number of living artists,” he adds. Nifty Gateway and other NFT art marketplaces (like SuperRare, KnownOrigin, and OpenSea) do this, but “many fear that they are slowly just recreating the winner-take-all model from the traditional market,” Bailey says.

“[They’re] the first example that we've seen of a true digital artifact, something that can exist 2,000 years from now.”

Duncan and Griffin don’t see it that way, even though some of their dream Nifty recruits are big-name artists like KAWS, Takashi Murakami, and Jeff Koons. “I think the same way the internet has made everyone their own publisher, digital art is going to really transform the relationship most people have to art,” says Griffin. Before Nifty, none of his friends collected art — it was too expensive, the industry too uninviting. Now, they buy digital art online.

Thanks to blockchain’s immutable ledger technology, NFTs also bring longevity to digital art. “[They’re] the first example that we've seen of a true digital artifact, something that can exist 2,000 years from now,” Duncan says. With our experiences only gravitating more online due to Covid-19, a museum displaying life in the 21st century, Duncan says, “[W]ould be incomplete without digital artifacts.” The Cock Fosters are planting the seeds for that exhibit.