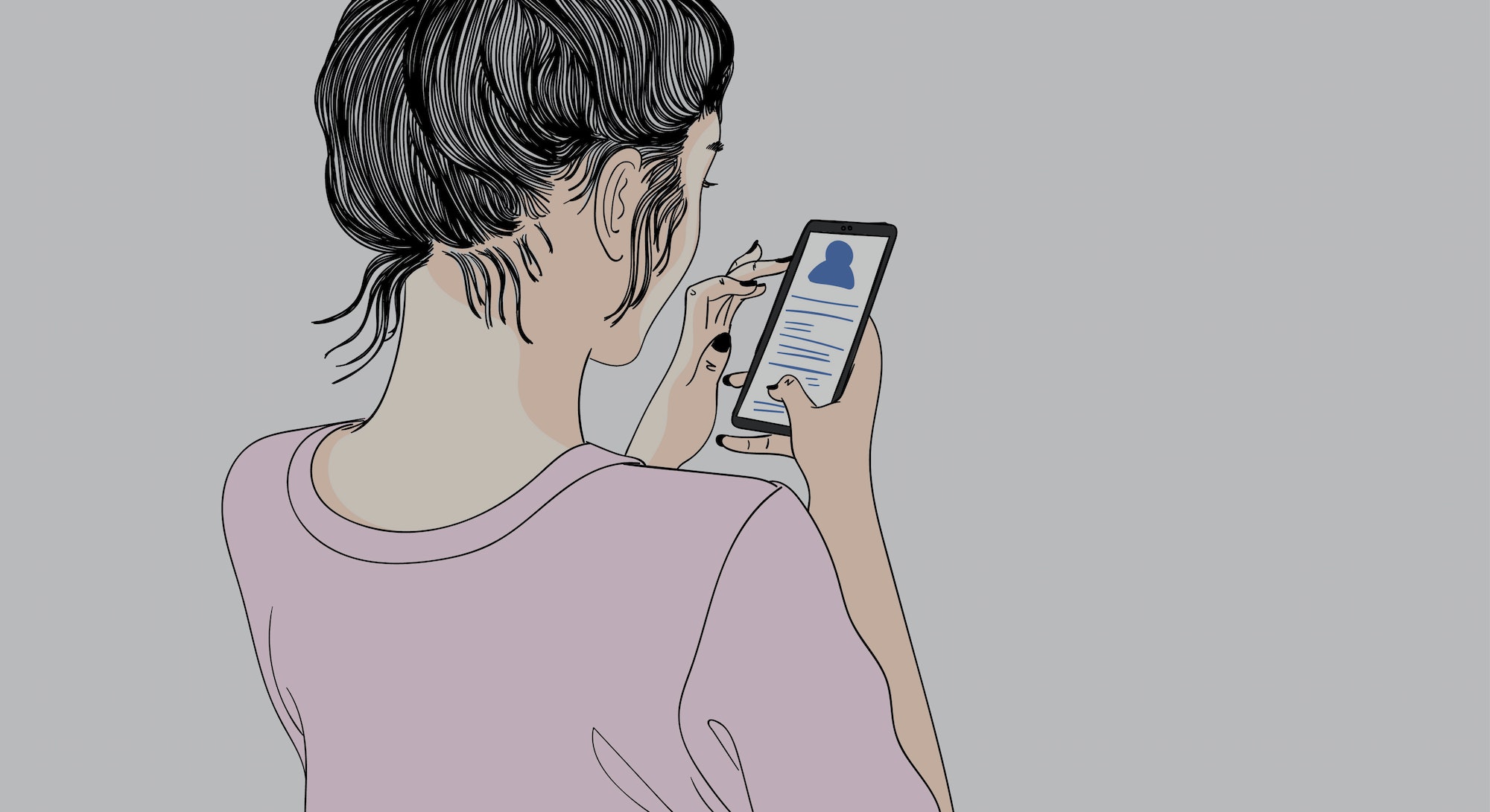 During summers off from high school, I flipped through the newspaper daily to check the front page, local sports, and the classifieds, as one did before Twitter existed. It’s where I found out a classmate had been shot and where my friends and I discovered a 10-year-old we knew took his own life.

I remember feeling an initial shock when these things happened so close to home, but it was the newspaper after all, and those stories were supposed to be there.

When the paper wasn't delivering bad news, it was my parents or close friends who would carefully share that kind of information, gently making sure that I was in the best possible state of mind to receive it. Then came social media in the 2000s, and with that the rapid spread of information about friends, family and strangers, good and bad — whether you were prepared for it or not. One day, I learned that my friend was dead when someone wrote “RIP” on her Facebook wall. No warning. Nothing.

I was frantic. Calling college roommates I only speak to a handful of times a year, I jumped to conclusions and scoured the internet until someone had answers for me. It was a terrible feeling to see a stranger write “RIP” on her wall, next to Facebook’s typical onslaught of engagement announcements and new baby photos.

With the level of connectivity we collectively have and speed at which news can be shared, it’s become the norm to discover someone’s death online and in reaction, immediately post something to participate in the group grief.

“I would say this stems from wanting support from their online community,” says Elizabeth Beecroft, who has had to administer grief counseling in her role as licensed social worker and psychotherapist in Brooklyn, NY. “It seems that social media is often the first place people go to share their news, both the positive and the bad, in certain instances. Sharing this news often brings in a lot of support through comments, likes, and DMs.”

As of January 2020, approximately 3.8 billion people worldwide were using social media. Apps like Facebook, Instagram, and Twitter have not only altered the way we as people connect, they have changed how we process life milestones — from pregnancies and obituaries to COVID-19 testing and diagnosis experiences.

“Seeing that stark death announcement as soon as you open a tab is the most gut-wrenching thing,” says Daniela Strahan*, who found out her cousin died via Facebook post. The cousin had been in a coma for about a week after experiencing a blood clot. Strahan’s mom and sister were in the other room talking about the improvements in their relative’s health when Strahan stumbled across the cousin’s sister mourning on Facebook.

“I kind of just closed my laptop and continued to listen to them while I was processing what I saw,” she recalls. Nearby, she could hear her mother on the phone crying after receiving the news and her sister soon saw the Facebook post as well.

Martika Ragan discovered her former roommate was dead when she visited the friend’s Facebook profile. They’d lived together years prior and were close at the time before moving on to other cities. “We hadn’t spoken in maybe a year, and when I got to her Facebook, I found out she’d passed in a car crash six weeks before,” she says. Shocked, she started to look for answers. “I text one of my friends like, ‘Why didn’t you tell me?’ and he said, 'Well, it was on the internet. I thought you knew.'"

“It was on the internet. I thought you knew.”

The idea that if something is online everyone in your circle, community, or echo chamber should know it is not only flawed but also clearly linked to the way social media has shaped human interaction. Ragan’s friend found it more natural to assume everyone had seen what he’d seen on Facebook, rather than do the thing that everyone online is always saying to do — check on your friends.

Samm McAlear found out about the death of his childhood best friend Trent after McAlear’s sister called and told him to check Trent’s sister’s Facebook page. “I didn't even find out until after the memorial,” McAlear says. “I’m sure his mom had other things going on, obviously. I didn’t get to bury my best friend because I just didn’t know he was even gone.”

Ragan says she’s actually learned via social media of a number of people passing, in addition to one friend she heard about through a phone call. Looking back, she recognizes she processed the deaths differently when she received a phone call versus discovering it online.

“It’s a lot more personal, and it hurt a lot more,” she says of the time a friend called her to inform her their friend passed, whereas she called finding out online “desensitizing.”

After the initial shock of losing her friend and upon confirming it to be true, she went into action. “I muted everything — his name, his Instagram account,” she remembers. “I took a shower, got dressed and went to a cafe to edit video.” She buried herself in her work, unprepared to see others grieving. Nor was she ready to post about it either.

In addition to making social media easier to avoid taking any responsibility one on one in friendship under the guise of doing your part by liking, sharing, and posting your own thoughts online, it turns the death into content to be engaged with.

“You have to post about it. You have to be sad. You have to sit in this space, and not everybody deals with grief like that.” Ragan says. “Even the whole thing with Kobe [Bryant], I had to get offline. There’s a bunch of people that don’t know this man grieving, and people are mad because someone didn’t grieve someone the ‘right’ way, and now they’re getting shamed online and canceled. It’s just weird.”

“I feel like it creates this pressure to mourn,” Strahan says, “or, at least exhibit it.” Doing so, opens up a space for conversation — a place for people to apologize, grieve with you, and even ask questions. “It could be therapeutic for the individual who is posting because it might help them gain support, but on the reverse it's important to be mindful about the post in general because it could be triggering or traumatizing for others who are exposed to it,” Beecroft points out.

Ragan really struggles with the over-familiarity some people exhibit online: “Why do people feel like it’s okay to ask someone who is visibly grieving online how their loved one died? Like in the comments?”

It seems following someone on social media can create a manufactured or unrequited closeness. Beecroft says wanting to know how someone died and offering to be there are two different things. “Knowing or not knowing will not hinder anyone’s ability to support a friend,” she says.

“It feels like a lot of us don’t really have etiquette around death,” Strahan adds.“I don’t know if it’s something that’s taught, but I wouldn’t know what the first thing to do if a close friend or close family member died. I feel like there is something to be said about decorum. It’s almost like we’ve been handicapped by social media around death.”

These experiences will definitely continue to shape the way we grieve online, especially in a time where we’re all navigating a worldwide pandemic online for the first time in history. Following Trent’s passing, McAlear posted one childhood photo of the two together simply with the broken heart emoji as the caption. “I turned the comments off, because the post was for me. I don’t need to tell the world everything,” he says. “I didn’t want people to ask questions. I didn’t want to answer questions. I still have questions.”

However, he says he was fully “publicly” grieving on his “Finsta” (a secondary, private, and less work-related Instagram account), because it’s more like a group text.

“Sometimes how you actually feel can get sort of warped in seeing how everyone else feels at the same time.”

Ragan says she was much more open on her Finsta as well, though she liberally mutes and unfollows people, in addition to taking time away from the internet during times she’s lost someone or when the internet seems to be collectively grieving someone. “I need my feelings and thoughts to feel like my own, especially in those moments,” she says. “Sometimes how you actually feel can get sort of warped in seeing how everyone else feels at the same time.”

Beecroft also flags something else those grieving should try to keep in mind. “Make sure that you have your facts straight and also be careful with sharing too many details,” she says. “It's perfectly fine to grieve and want to be able to remember someone, but sharing too much information could be a concern as it might be something the family would like to keep private.”

And sometimes the information shared online is false. Adrienne Michaels* received a message about her estranged best friend’s death when she was, in fact, still alive. “In September, someone I went to high school with DMed me to tell me she had [overdosed] and died. This girl apparently made a Facebook status that broke the news to a lot of other people as well.”

Michaels mourned the passing of her friend for over a week before finding out her friend was actually alive and in rehab after overdosing on heroin. Looking back, she says, “It’s still so crazy that happened.”

As our relationship with life, death, and the internet continues to evolve, it’s clear there are things to consider when grieving online. In addition to the deceased and the family’s privacy, recognizing it can and probably will create conversation and identifying whether you’re properly informed and would be comfortable saying the same thing offline as you would online are a good starting point.

While he’s now more aware and understanding of the reasons and ways others grieve online, McAlear believes he’ll probably continue to keep it to a minimum to deter conversation about it. If anything, he says, “It’s reminded me to be more present, take more pictures, and check up on your people.”