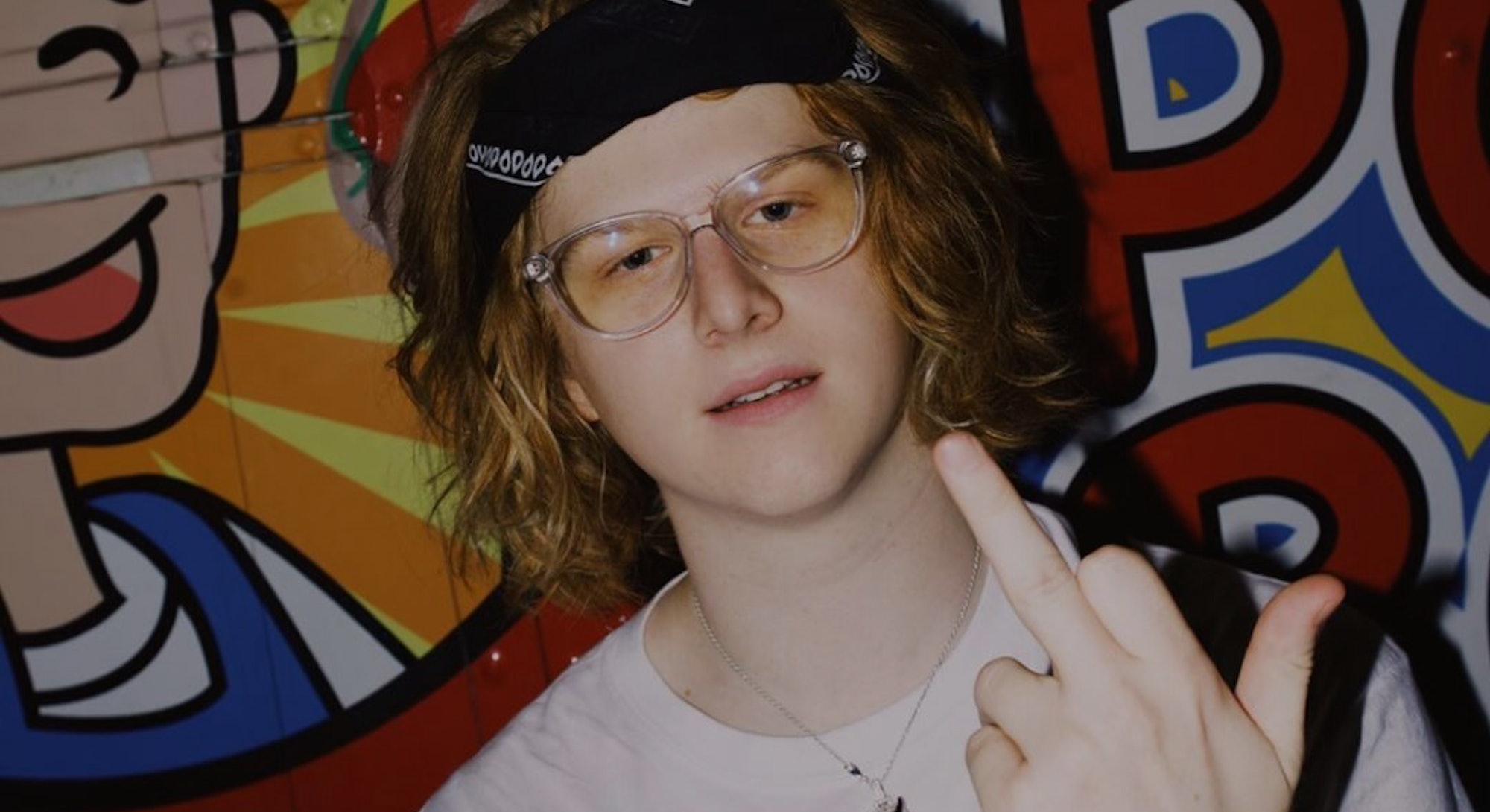 Back in 2016, Adam Grandmaison, better known as Adam22, was on top of the world. Night after night, another SoundCloud rapper with face tattoos rolled into Grandmaison’s makeshift studio in the back of his streetwear store on Melrose Avenue in Los Angeles to make an appearance on his No Jumper podcast.

No Jumper (the name comes from a Gucci Mane lyric) had no rules — artists were encouraged to say or do anything they pleased, whether it was discussing explicit tour exploits or rolling blunts on Grandmaison’s desk. Grandmaison, a heavily tattooed online poker player and BMX blogger, interviewed rappers like 6ix9ine, Trippie Redd, and the late Xxxtentacion well before any of them reached the Billboard charts.

By early 2017, No Jumper — which the New York Times would go on to dub “The Paris Review of the face-tattoo set” — was one of the most popular podcasts on YouTube, garnering millions of views per month. Grandmaison, then 33, was the head of a burgeoning media empire. (This was a year before allegations of sexual misconduct and physical abuse against Grandmaison emerged, prompting him to tweet, “I’ve done plenty of stupid shit in my life. But I’ve never raped or hit a woman.”)

But then his business model crumbled, as the YouTube algorithm demonetizing “offensive and derogatory content” went into overdrive. Grandmaison’s No Jumper, which hosted unfiltered, pill-popping rappers, was hit especially hard. “We went from about $50,000 a month off YouTube to around $5,000 a month,” he says. “I was like, ‘Oh shit, I need to figure out how to make money in other ways.’”

A lifelong entrepreneur, Grandmaison saw an opportunity in a new YouTube feature called Super Chat, which allowed viewers to pin a comment and make payments during a livestream. For a monetary “donation,” he would react and give feedback to fan-submitted songs in front of his live audience of SoundCloud rap enthusiasts. As long as viewers paid and put a link to their track in their pinned comment, he would listen to their song — even if it took him all night. On the evening of his first stream, he set a relatively low price of $20 per play. Soon, the requests — nearly a thousand of them — rolled in.

“I decided that if people were paying me to listen to their music, I would stay on until they were done donating,” Grandmaison says. Subsequent broadcasts lasted as long as 13 hours, and some nights he made $15,000. (Occasionally, craziness broke out during the livestream, like the time a man rushed into the room with a fake gun and held Adam at Gunpoint; the man was quickly tackled and restrained.)

“When you’re making one to two thousand dollars an hour, it can be especially tough to say no and stop the stream,” he says. (For an extra $200, Adam also will post a song to the No Jumper Soundcloud account.)

Among those who early on gave donations — or had donations made on their behalf — were future stars Megan Thee Stallion, YBN Nahmir, and the since-deceased Juice Wrld. “The extent to which people have gone on to be huge is honestly staggering,” Grandmaison says.

Since Grandmaison introduced his new approach, his model has been imitated by others, including his friend Cameron Haller, a 21-year-old from Maryland who runs the CUFBOYS YouTube channel. Haller’s livestream was an early boost to the careers of 19-year-old Golden Landis Von Jones, known professionally as 24kGoldn, whose hit song “Valentino” has 16 million views on YouTube, and 20-year-old Michael Ian Elmo, who goes by Iann Dior, whose best-known songs, “Emotions” and “Gone Girl,” have more than 70 million plays each on Spotify.

But is this all legit? Is pay-for-play the future of music discovery? People on the business side of music have mixed feelings on the practice. “Finding the artist is step one in a long process, so anything that makes that process easier is very much welcomed,” says Nobody Umehara, the head of A&R at the Arizona-based label No Mo Monsters.

David Bacon, head of 7S Management, a boutique artist management company in Denver, takes a more cynical view. “A million years ago — before the internet — there were businesses that claimed to offer access to the industry and said to unknown artists, ‘Give us X amount of money and it will get heard by A&Rs,’” he says. “This is the new version of an old-school hustle.”

Artists are also divided as to whether this is all a hustle. Booku, a heavily face-tattooed rapper from Oxford, Penn., says he has seen the benefits of submitting his song to No Jumper’s stream. “By either the stars aligning or by divine intervention, a fan of ours actually submitted the track ‘Who Goes There’ to Adam22’s livestream,” Booku says. “In the chat, the song took off. Adam’s audience kept spamming ‘Who goes there,’ and saying other artists ‘didn't go there’ when the song wasn’t to their standard.” The track has since netted over a 100,000 listens on SoundCloud — a personal best for Booku, which he attributes to the livestream.

Lexieeduh, a Jacksonville-based artist who paid to have her music reposted on Grandmaison’s Soundcloud, thinks the money was well spent. “All the songs he reposted got over 15,000 plays,” she says. “If it wasn’t for him, I don’t think I would have been introduced to all the artists that found me and wanted to collaborate.” The silver-tinsel-wig-wearing artist Paperboy Prince, who ran for New York's 7th Congressional District last year, says his No Jumper song submission gave his campaign some badly needed attention. “I did it on a whim,” he says. “It was worth it.” He didn’t win the vote, but he did pick up some new fans.

“If it wasn’t for Adam22, I don’t think I would have been introduced to all the artists that found me and wanted to collaborate.”

Meanwhile, the Miami-based vocalist Cruz Milan says his donation to Grandmaison’s stream was a waste. “Long story short, it’s overpriced,” he says. “It brought a few fans to my music for sure, but — especially with SoundCloud now offering promotion — the money is probably better spent elsewhere.” RjWood, an artist from Las Vegas, echoes Milan’s sentiments. “Looking back, $200 was far too much for the publicity I got,” he says. “The song needs to be a banger to get anything from it. The song I submitted wasn’t a banger.”

A Canadian-based YouTube commentator and artist who goes by the name Progresss says he was disappointed with the level of attention Haller gave to his song. But he’s forgiving. “I get how tiring it can be to listen to song after song — it happens to me too — so I don’t hold it against him,” he says.

Meanwhile, a more attentive competitor called Patrick Cc:, a 23-year-old from New Jersey, has staked out his turf on YouTube. “I wasn’t early to livestreaming, but I did it differently,” Patrick says. He provides in-depth and personalized feedback, and his brutal honesty is part of his appeal.

He’ll offer advice like “If you want to sing man, you need to at least be in key” or “Pay an engineer next time, instead of me.” He says if you’ve been making music for a year or less, don’t even bother sending him your music to review — it’s probably trash. “I’ve had people threaten my life over this, “ Patrick says. “I don't bullshit anyone. I give you my 100 percent real, honest feedback. No beating around the bush.”

Even though he has only 200,000 YouTube followers, 10 times less than Grandmaison, that may actually be an advantage. “The good thing about sending in your money to someone with a smaller community is you get a tight amount of people who will offer valid criticism, what you’re doing wrong, what you’re doing right,” Progresss says.

Patrick also offers better value than his competitors. He says his price, $30 per track, is cheap compared to the amounts charged by Grandmaison ($100) and Haller ($50). “When you're a really small artist, if you get 20, 30, 40 followers in a week, that's life-changing for them,” Patrick says. “So a $30 payment is insane [value] to them.”

Unlike his peers, Patrick doesn’t accept payment for an automatic repost and often turns to his audience for its opinion on whether a song is “slap or cap” — i.e., good or not. If his viewers say the song slaps, the track is added to a public playlist on SoundCloud for his audience to revisit later. At the end of every stream, he also plays songs for free — a practice none of the other livestreamers does — sometimes for up to two hours.

Grandmaison's deal with Atlantic Records, where he had an imprint called No Jumper Records, is also behind him. In October 2018, The Daily Beast reported a new sexual assault allegation against Grandmaison; a woman claimed that he gave her Xanax when she was drunk, then had sex with her and videotaped it without her consent. (Grandmaison has denied all of the sexual assault allegations against him.) In December 2018, Atlantic parted ways with Grandmaison, though he claimed on YouTube that the move “wasn’t really based on the accusations.”

More recently, Grandmaison started playing online poker while listening to his viewers’ music for cash. Strangely, his audience don’t seem to mind that he is only giving its songs a modicum of attention. Yet every once in a while, a song catches his ear, and he’ll look up at the camera and mutter, “This is hard.“ Comments flood the livestream with the word “slap,” a nod to the song’s listenability.

Then Adam takes a hit from his joint and plays his hand. Win, lose, or draw, the donations continue to roll in.