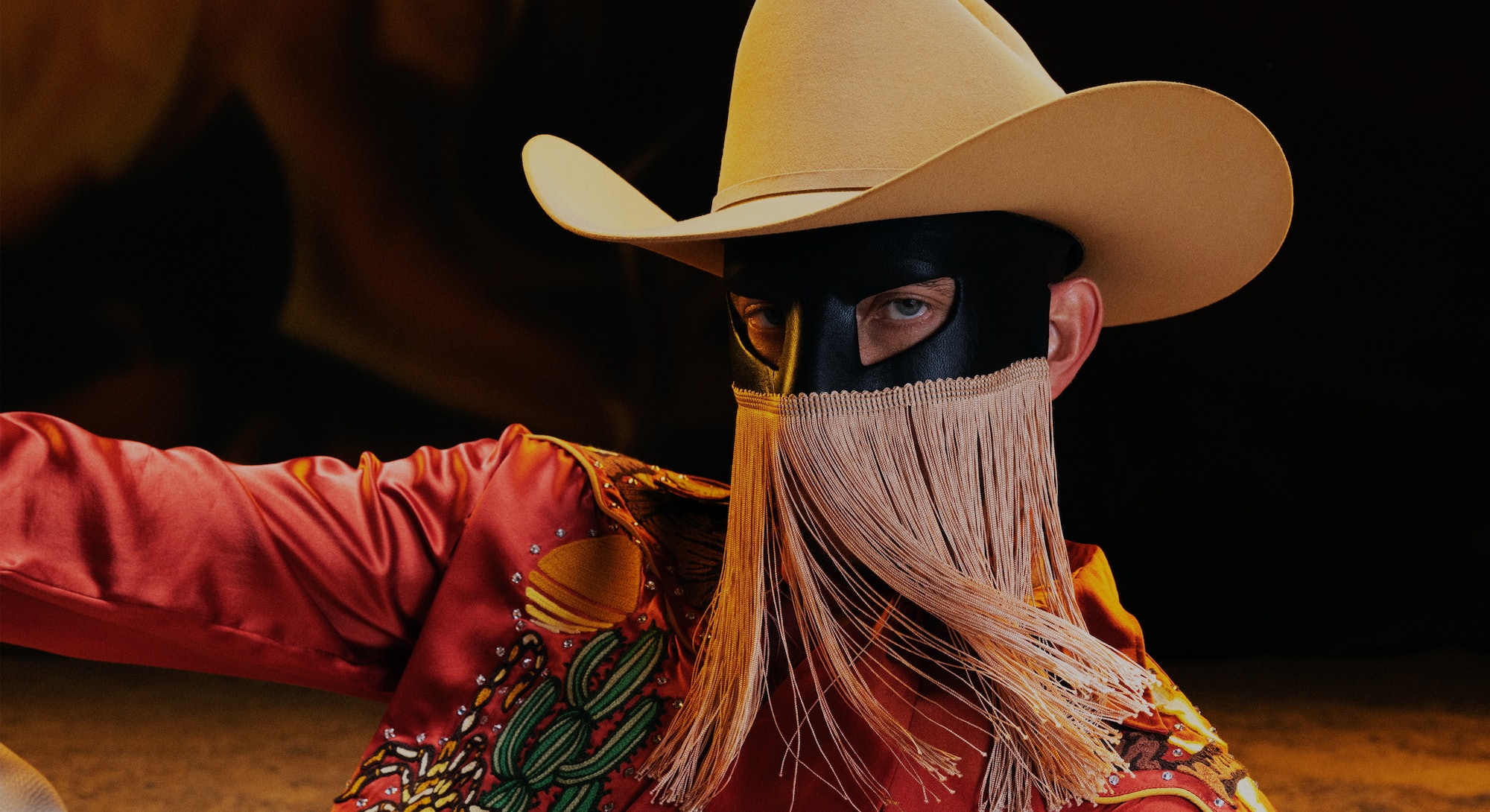 Not 10 minutes into my conversation with enigmatic country star Orville Peck, he hangs up on me.

We’d been discussing the songs he considers most precious from his new album, Bronco — a question he likens to picking your favorite child but answers anyway (“Hexie Mountains” and “Kalahari Down”) — and had just moved on to the aesthetic influences behind his music videos when suddenly he’s gone, and I’m left on the Zoom call with his silent publicist. Internal panic ensues.

He reenters the audio-only call a minute later, just as abruptly, with a sheepish laugh. The cowboy, it seems, has a modern adversary. “I’m so sorry,” he says. “Fucking AirPods. Every time I adjust them, it just hangs up.” For a person who is admittedly inclined toward “old man shit,” this feels pretty on-brand.

Orville Peck, the faceless country sensation, wears a fringed mask to conceal his identity and would rather you not worry about what his legal name is. He prefers gardening and reading (right now, a reread of The Velvet Rage, which he calls quintessential for gay men such as himself, plus lots of Cormac McCarthy) to TikTok and doomscrolling; hanging out IRL over staying caught-up on social media.

“I try not to be on the internet too much,” he says, even though it’s now kind of his job to do so sometimes. Authenticity is everything, onstage and off, and connecting with tangible things in the here-and-now is much more his speed.

Of course, leisure time in the garden is somewhat of a rarity these days. The South Africa–born, Canada-reared musician released his sophomore album, Bronco, in its entirety on Friday, April 8 after first dropping two “chapters” of the record in February and March, and kicked off his U.S. tour just shy of a week later, in California. He made an appearance on Jimmy Kimmel Live! the following Monday and became the No. 1 artist on Billboard’s Emerging Artists chart on April 20. He recently announced that he’s “the... face(?)” of the new Wrangler x Fender clothing line.

“Life has been a little hectic,” Peck tells me on April 21, the Thursday between Coachella weekend one and weekend two, where he played the Gobi stage. “I’m pretty exhausted but I also can really, safely say that this is probably the happiest I’ve ever been in my life — career-wise, personal life-wise, just everything in general.

“I’m, like, waiting for a piano to fall on my head,” he continues, referring to the surreal nature of it all. I offer the possibility that perhaps he’s already paid his dues, and he laughs. “I tend to be a bit of a pessimist, which is probably not shocking,” he says.

In the three years since Peck released his melancholic debut, Pony, he’s landed coveted magazine covers and worked with the likes of Shania Twain and Lady Gaga. His Instagram follower count — a metric he probably cares very little about — creeps closer and closer to half a million by the day. One of his songs was even used as the focal point of a particularly nerve-wracking scene in season 2 of Euphoria.

But sudden stardom, as we’ve been told time and time again, takes a toll on a person.

In the wake of his breakout album, he says, “I was so worn thin with touring. I was overworked. I was really unhappy in my personal life. I felt a lot of pressure with the sort of sudden success that I had off of Pony, just pretty negative feelings all around, which was culminating in, mostly, me being really, really mean to myself, putting a lot of pressure on myself and not being very happy.”

He released a follow-up EP, Show Pony, in the summer of 2020, around which time he says he began an overhaul of his personal life. Making Bronco was an exercise in processing and healing, he says.

“I sort of adopted this habit, I suppose, of just not giving a fuck anymore, to put it sort of bluntly,” he says, “but also, at the same time, caring so much more about what the music I was wanting to make was, and how I wanted to show up as my authentic self — how I wanted to tell my stories even more personally with less worry of what people would think, and less pressure about what I was supposed to be achieving or doing. Then, you know, songs just started pouring out of me.”

“I wanted to tell my stories even more personally with less worry of what people would think.”

Peck and his band rallied in Nashville to record and threw everything into trying to capture the essence of a live performance. It was a more classic approach than what might be typical of pop music today, Peck says, forgoing choppy sessions with dozens of people tinkering and instead getting everyone together “rehearsing and then just playing everything mostly live off the floor.”

“It just turned into this amazing, big project,” he says, one created with “care, and intent, and love.”

Thus, Bronco was born: 15 songs, 54 minutes. It’s accompanied by five music videos (so far) that could almost be seen as standalone films in the Orville Peck Cinematic Universe. And they’re something to behold.

“The Curse of the Blackened Eye” sees Peck stalked by a shadowy specter — a creature-ified Norman Reedus, looming like some dark omen that always seems to be right over the singer’s shoulder. “C’mon Baby Cry” zooms out a bit, giving us (jazz hands) showbiz and culminating in an emotional release. “Hexie Mountains” and “Let Me Drown” take us somewhere more intimate: Peck and actress Riley Keough going through the motions of a relationship unraveling in the former; the band performing live in the studio, a repurposed church, in the latter.

In “Daytona Sand,” which dropped in March, our masked hero surfs atop an 18-wheeler through downtown Miami — a stunt he performed himself — in a visual narrative that feels like Midnight Cowboy meets Escape from L.A. Doing that was “absolutely crazy,” he says, noting that they’d thought the potentially dangerous concept would never fly to begin with. But in Florida, anything goes. “It literally felt like Mission: Impossible,” he laughs.

Tap through: Orville Peck on making the 5 mini-movies of ‘Bronco’

All five clips were directed by Austin Peters, a good friend of Peck’s. The duo worked together previously on 2020’s “Queen of the Rodeo” video, which stars (and is said to be about) drag queen Thanks Jem and cemented Peck’s image as something of an outlaw sprung from the Black Lodge. That video also features a cameo from The Boulet Brothers’ Dragula Season 3 fan-favorite Louisiana Purchase. (Peck later guest-judged an episode from Dragula S4 with buddy Trixie Mattel, and his song “Dead of Night” was used in the finale of Dragula: Resurrection.)

Drag has always been a through line for Orville Peck, in his life and in his art.

He says he took a proper stab at drag once and only once for a fundraiser event back in the day, of which he can tell me almost no details out of concern for his anonymity (💔). But he coyly assures me that it was “pretty cool.”

“It was probably the most frightened I’ve ever been on stage,” he says. “I've been a ballet dancer, an actor, I’ve done everything that you can imagine in the arts, and it’s really nerve-wracking to put yourself out there with something like drag.” Doing drag, he says, takes bravery. “I’ve just always liked drag queens. And I think just, as an art form as a whole, there's something kind of punk about it, you know, there's something subversive about it.”

“There’s something glorious about [drag] because it’s about passion and this unstoppable need to show us who you are.”

Drag is DIY at its core, he explains, something that really appeals to him and his own coming of age, being in bands that played shows attended by “three people and the sound guy.” The personal costs are high — the many hours and dollars behind often hand-crafted wigs and outfits, minimal returns from tips, the exhaustive process of getting ready. “There’s something glorious and cool about that because it’s truly an art form that is, at the heart of it, about passion and this unstoppable need to show us who you are.

“I think that's what I like about art in general,” he continues, “and I think drag epitomizes it better than any other — you know, there’s people in other art forms that do that well, but drag queens tend to do that just as a fundamental.”

That admiration for the drag scene writ large is painted all over his body of work. And, perhaps, goes down to the very essence of Orville Peck, the distinct but still deeply authentic stage persona of this unknown person behind the mask. Is this his take on drag? Screw it; I ask.

“Yeah, I guess so,” he says, “because I think good drag is — a good drag queen to me is someone that isn’t playing the character, it’s somebody who is showing us the most extravagant or bombastic or private or vulnerable or elevated, or whatever it is, the biggest version of who they are. And it's almost like their personality on steroids. You know, it's, like, the most real in a way, which is kind of the irony of drag. And that’s what good drag is. It’s almost this form of hyper-sincerity.”

That’s camp, baby, and Orville Peck is all about it.

As Peck’s celebrity grows, that sincerity is what he’s clinging to.

The star is well aware of the effect his candid, “take me for who I am” stance has had on the scene. As an openly gay man who surrounds himself with drag queens, Peck has brought on a reckoning for the larger cultural understanding of what “country” is and isn’t. He’s called out — and leaned into — what he says are the “inherently gay” themes underlying Spaghetti Western cowboy ideals and sung about truckers falling in love on the lonely road, a trope that’s more commonly been parodied in pop culture than addressed in earnest.

While queer people have always existed in these spaces, the reception hasn’t always been so warm.

Orville Peck shows, though, don’t draw any one demographic; the crowd is, always, more of a beautiful hodgepodge. “It’s very obvious to us that the audiences are incredibly diverse in age, gender, race, everything,” he says. “It’s really cool.”

There’s undoubtedly still a stigma attached to the idea of who can make, enjoy, or be successful in country music, but if Peck is to have any lasting impact, he says he hopes that he’d have helped with “breaking down that ceiling a little bit, that people feel a bit safer in doing so.” That goes for anybody, he says, “whether they’re queer or marginalized by the color of their skin or their gender, or where they’re from.”

Despite the emotional downturn that followed Pony, Peck is now finding it easier to connect with the things that matter, a desire that’s only growing alongside his success as an artist.

He’s focusing on putting less pressure on himself, he says, and opening up, as opposed to doubling down on “a closed-off life.” Somehow, in the face of fame, Orville Peck is striving to “feel more like a regular person.” It’s the human connection that transcends the disguise and inspires fans to show up in the first place, that clicks with them on an intensely personal level. Even his anonymity can’t undermine that. Not as long as he’s being real.